` The Latest On Loliware - Those Edible Cups - If It's Hip, It's Here
Skip to content UPDATE ON THE UPDATE! : If you watch Shark Tank, you might have seen Chelsea and Leigh Ann pitching their LOLIWARE on October, 2, 2015. They did a great job and all the Sharks were both excited about the product and impressed with its taste and function.

Loliware ended up accepting a deal on Shark Tank from Mark Cuban and Barbara Corcoran for $600000 after receiving multiple offers. Having kept track of their progress since 2010, it will be exciting to see how the brand grows. 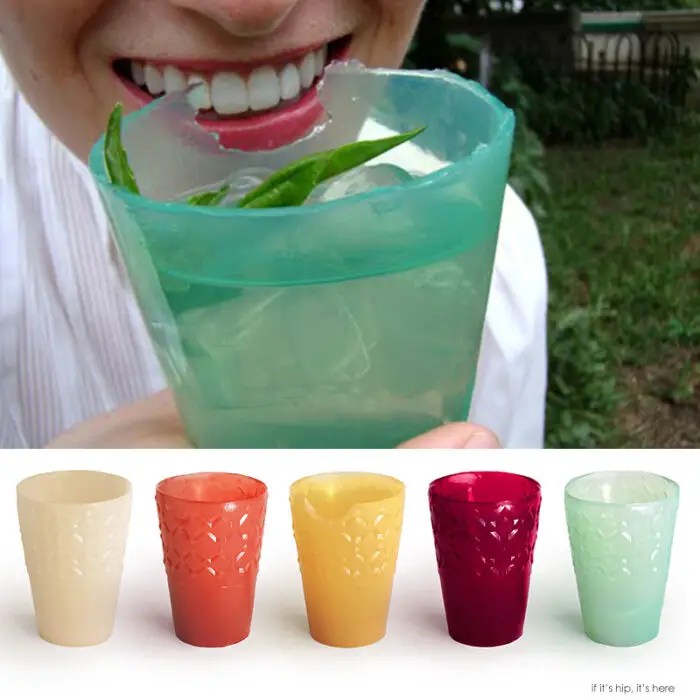 Here’s how it all began – the product name changes, cup shape changes and more.

Four years ago I introduced you to edible drinking glasses that when littered actually benefited the environment. Initially created for a JELL-O design competition in 2010, the cups are now flavored and available for purchase. 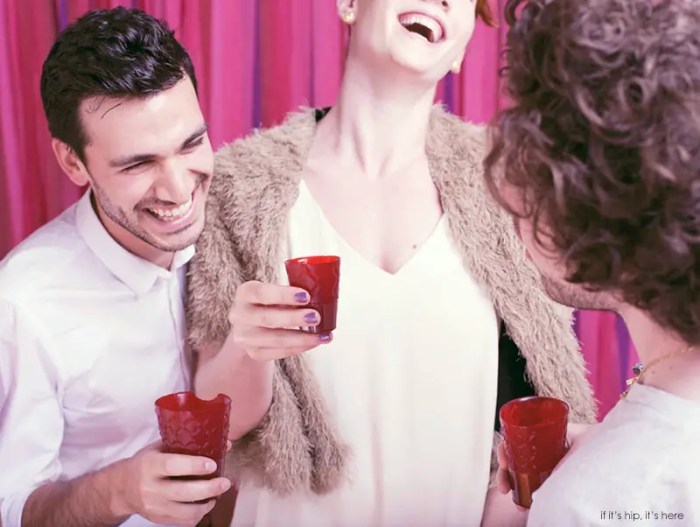 Developed by The Way We See The World, the edible gelatin-based cups were then called ‘jelloware‘ and incited much interest and press. Since then, the cups have been developed for purchase under the name Loliware with CITRUS, a bright blend of Pink Grapefruit and Yuzu, being the first flavor. Four flavors are now available.

In addition to the name change and introduction of flavors, the cup shape has also changed numerous times since its inception. It’s now the ribbed version you see below.

ABOUT LOLIWARE: 100% BIODEGR(EDIBLE)
LOLIWARE are biodegr(edible) cups designed to complement a variety of beverages. While you’re sipping your drink, you can even eat your cup, and any remnants can be composted. Sure to spark conversation in the hands of guests at parties and events, LOLIWARE’s artisanal flavor and unique texture enliven every occasion. Made entirely of vegan, biodegradable ingredients, LOLIWARE is a delicious alternative to ‘disposable’ cups destined for the landfill. Put down the plastic and enjoy the future of sustainability: 100% Biodegr(edible). ANSWERS TO QUESTIONS YOU PROBABLY HAVE:

You mean you can eat your cup? Really?!
Yes! The entire cup is biodegradable and edible, hence biodegr(edible)!

Why would I want to eat my cup?
LOLIWARE is so biodegradable you can eat them. You don’t have to eat your cup, but they are pretty delicious.

What does LOLIWARE taste like?
Imagine if a swedish fish and fruit leather had a love child.

What does LOLIWARE feel like?
LOLIWARE has a matte surface and a flexible structure.

What is the pattern on the cup all about?
For beauty and for function–the pattern helps you grip the cup.

Is there gelatin in LOLIWARE?
LOLIWARE is made from a vegetable gelatin called agar-agar.

When should I use LOLIWARE?
LOLIWARE cups should be used in place of plastic cups. It’s the perfect cup to use for parties, weddings, outdoor picnics, events, concerts, birthdays, you name it.

Can I compost LOLIWARE?
We hope you do! LOLIWARE can be thrown in the grass, it’s that compostable.

How long can LOLIWARE hold a drink?
24 hours for most liquids.

Can I serve hot liquids in LOLIWARE?
No. LOLIWARE can only be used with drinks that are room temperature or colder.

Do you make custom flavors or colors?
Yes! Please inquire with Chelsea for custom LOLIWARE cups.

How many flavors do you have?
We release new flavors seasonally. Our current flavor is CITRUS, a bright blend of Pink Grapefruit and Yuzu.

When is your next flavor launching?
Fall 2014.

How is LOLIWARE packaged?
LOLIWARE is packaged in a PLA sleeve and recycled paper tube. Our dream is to package our edible cups in edible packaging.

Do you ship outside the U.S.?
We hope to in 2015. We are looking for international partners.

The inspiring women behind this product.

Chelsea Briganti: Co-Founder & Co-CEO, Social Entrepreneur
Chelsea was born and raised in Honolulu, HI and loves experimenting with new forms in the Loliware Lab. She envisions designers as agents of change and fundamentally believes in the cross-pollination of ideas, disciplines and resources, as well as the exciting, translational space where design converges with science. Her dream is to create the world’s first edible water bottle.

See more projects and inspiration from The Way We See The World.