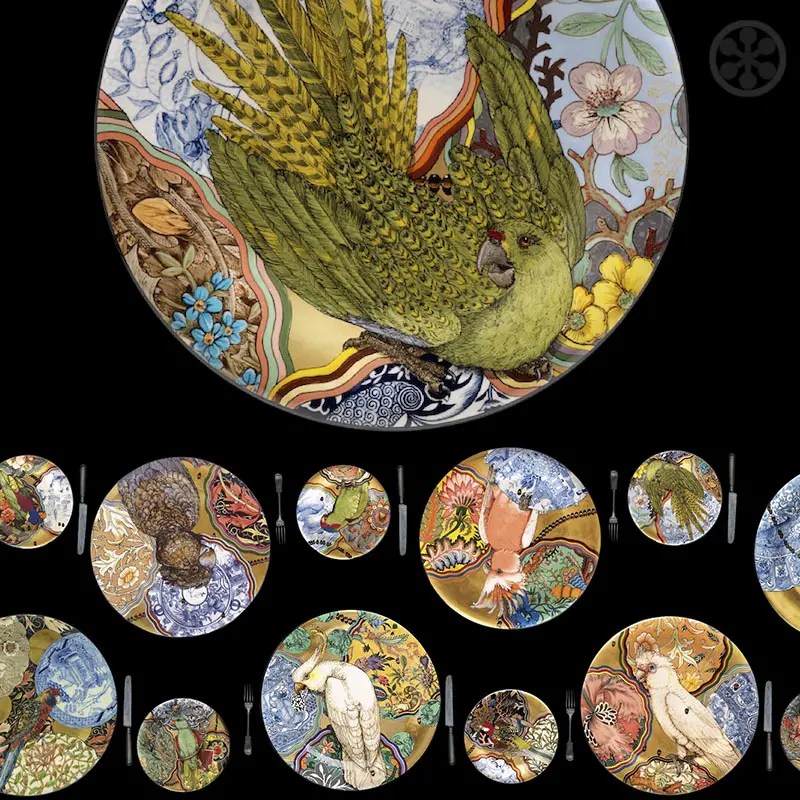 The focus of ceramicist Stephen Bowers’ Jamais Vu, a recent exhibition at Lauraine Diggins gallery, was be a remarkable dining set. Richly adorned serving, dinner and entrée plates, each displaying an Australian parrot are highlighted against a complex layering of background patterns to result in the breathtaking Camouflage Series tableware.

The following text is from Christopher Menz, The Art of Camouflage: The Ceramics of Stephen Bowers, catalogue essay for Stephen Bowers: Jamais Vu, 2016

Stephen Bowers Camouflage Series of entrée, dinner and serving plates feature Australian parrots against a rich and complex background of shapes and patterns and designs which in part have been inspired as a result of a Churchill Fellowship awarded to Stephen in 2014 to research museum collections in the USA, UK and Europe. Incorporating ideas of tromp-l’oeil, natural history, decorative arts, historical reference and personal commentary, the series strikes a thought-provoking balance between consumption, use and display. With their fragmented imagery, the plates suggest the possibilities of larger stories. The delicacy inherent in ceramics is almost overcome by the opulent ornamentation with its shimmering gold and layers of patterning, revealing the mastery of Bowers’ technique. 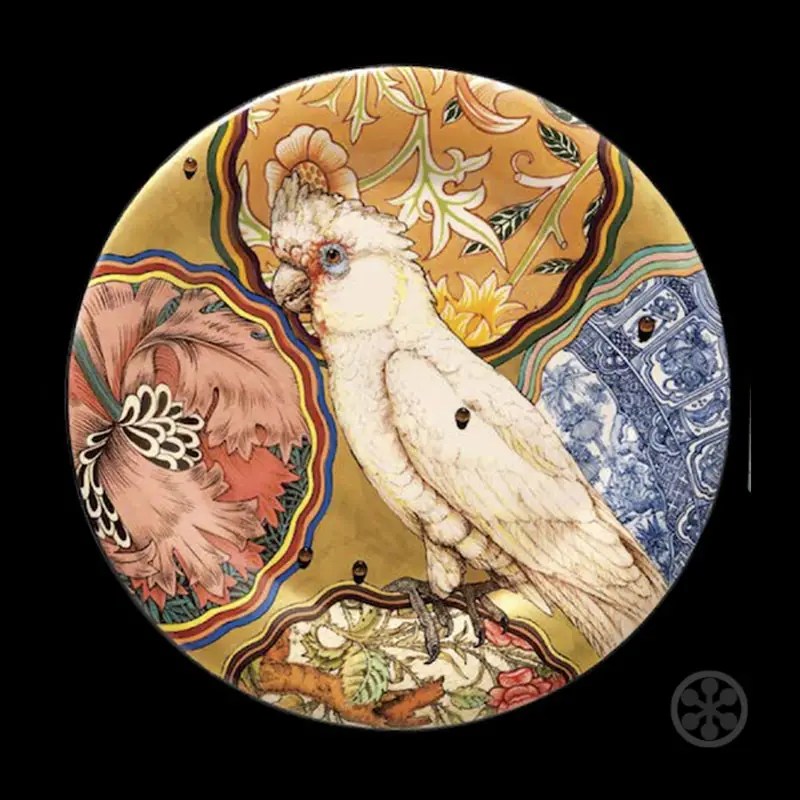 Building on Stephen’s interest in the use of fragmentation in his work, which has been a theme he has explored for decades, the Camouflage series use this layering of sections to great effect. These cartouches both work in harmony and contrast with each other and allow a deeper level of narrative into each piece where the parrot may find itself surrounded by vignettes inspired by William Morris wallpaper; French Toile textile designs; botanical illustration; references to trade, in particular the Dutch East India Company; masterpieces from museums around the world and the obligatory reference to the famous blue and white willow china. 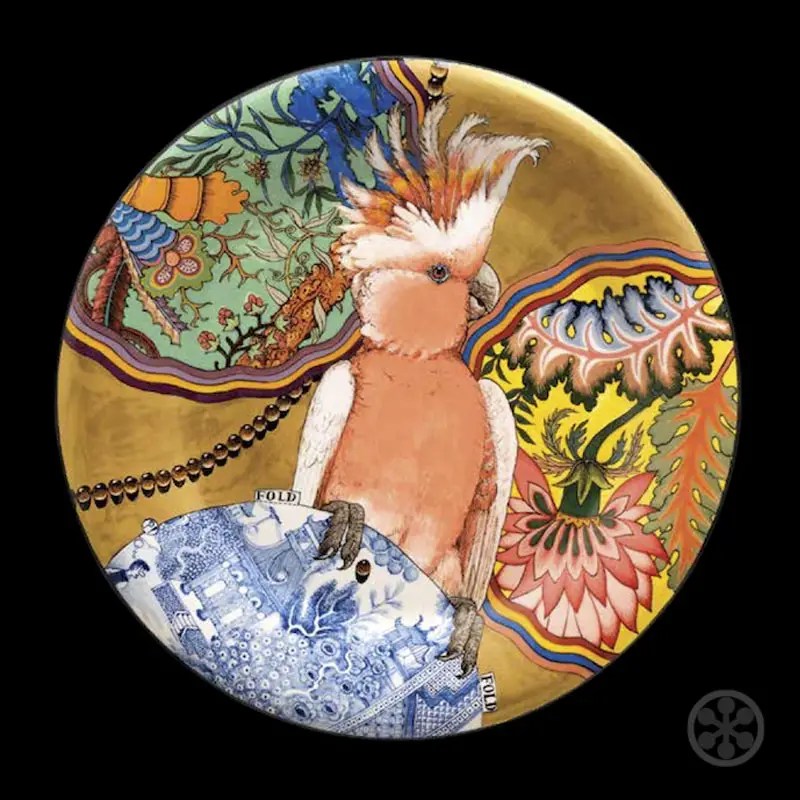 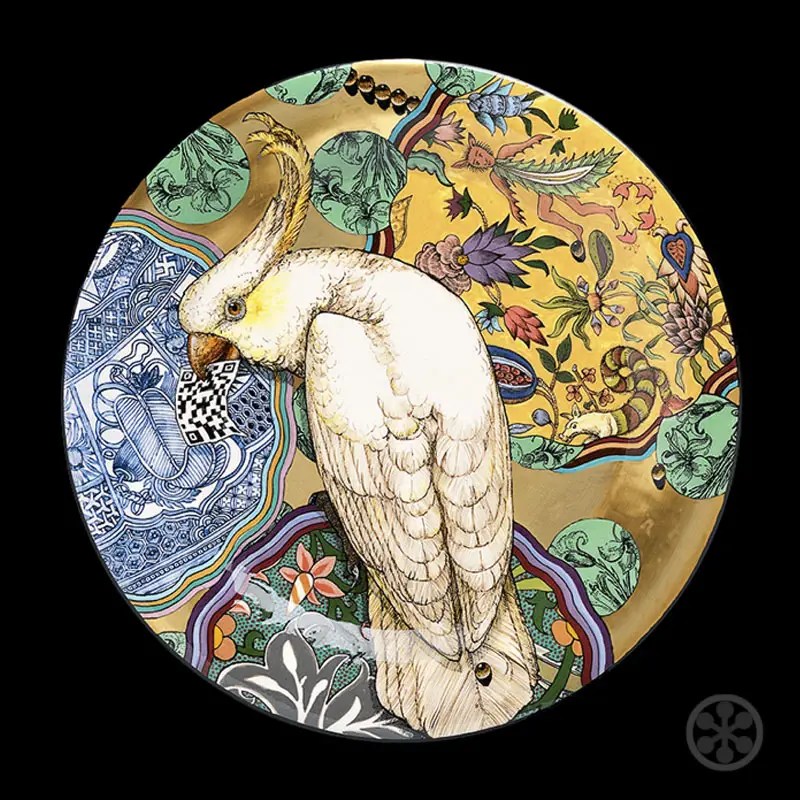 The Camouflage Plates certainly reward the viewer who does take a closer look as there is such a richness not only in the skillfully hand-painted ornate patterning and sumptuous use of colour, highlighted with shimmering gold, but also in the cultural references and part of the fun is playing sleuth to discover the myriad of allusions. 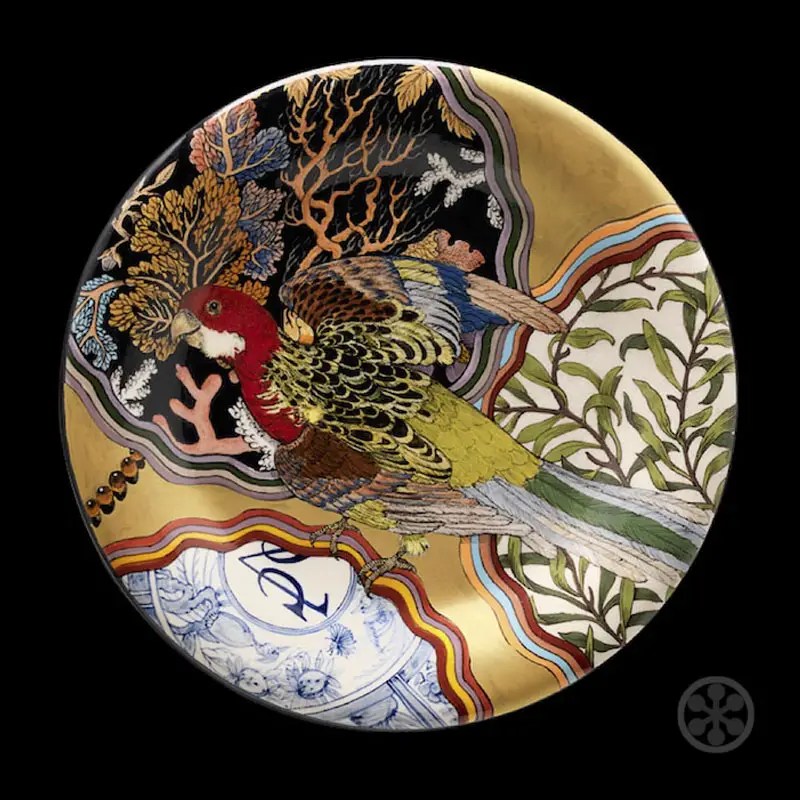 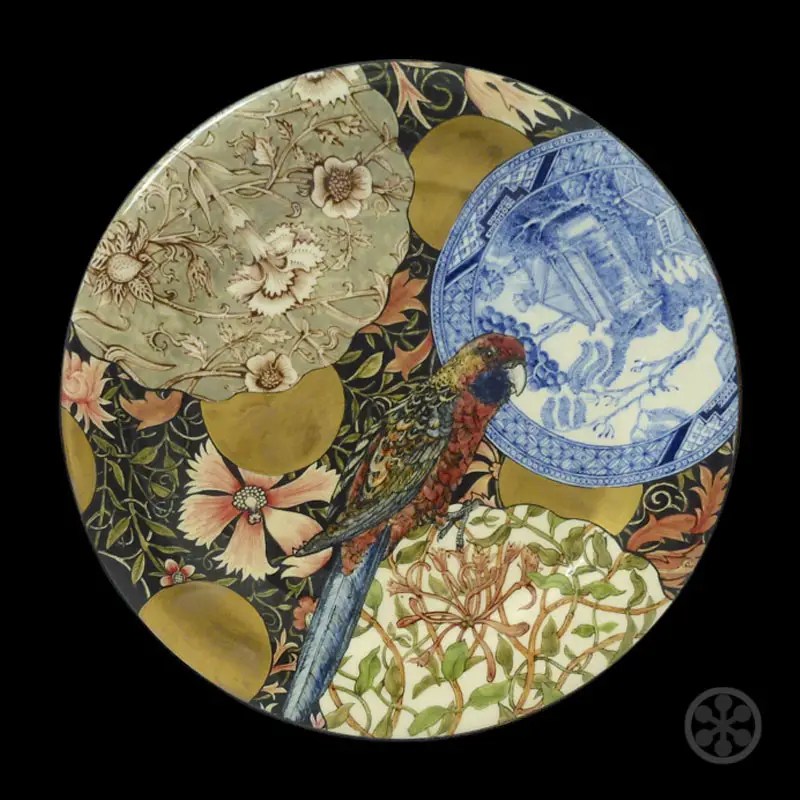 Time-lapse video of the making of the entree plate above:

The parrots featured on the plates are really portraits, some paying homage to bird illustrator, William T Cooper and include Cockatoos (Sulphur Crested, Red-Tailed Black, Major Mitchell), Corella, Rosellas, and Lorikeets. The botanical patterns inspired by nature and through historical sources (for example William Morris designs; French toile designs and botanical illustration such as from Cook’s Endeavour expedition) are symbolic of the colour and beauty of the natural world and its appropriation into the human environment. This mix of cultural references from such a wide range of historical and diverse regions prompt us to consider Australia’s place and context within history and the contemporary world. Further, the fragmentation is symbolic of patterns being disrupted within society and globally.

“Framed within the illusory, sleight of hand, tromp l’oeil world of my plates, images of overlap, disruption and fragmentation occur. This is a response to the dilemma of living in a time of spectacular consumption of finite resources, of increasing pressure of human population and environmental impact, global warming and the breaking down of the resilience of the natural world.” Stephen Bowers, 2016 Inspired by the vivid colour and detail found within the decorative traditions of ceramics, Stephen specialises in underglaze decoration with additional applications of on-glaze lustres, gold and enamel adding yet another luxurious layer to his work. Layers of decoration are painted on in stages and across multiple firings. “Richly decorated hand-painted dinner services have been prized since their invention in Italy in the sixteenth century. The more elaborate and valuable services were used only for the grandest occasions. Despite developments in printing and less labour-intensive decorative techniques over the centuries, detailed hand-painted decoration for fine services has never entirely gone out of fashion. The Camouflage series dinner set is an appropriately Antipodean response to the grand European dinner service tradition. Given this heritage, the decoration is a fusion of Australian and exotic motifs.

The plates are individually decorated with Australian birds set against complex backgrounds of fragmentary decorative ornament, including several Morris patterns, printed French toiles along with sections referencing antique blue and white and Ming porcelains. Suggestions of shadows and overlaps are used skillfully. Another element of visual play occurs throughout the series; carefully painted tromp l’oeil amber ‘beads’. These form a kind of signature for the series, a broken and scattered necklace, which connects across all the pieces.”

You can read the full essay by downloading the catalogue here

The Camouflage Series is a dinner set which can be comprised of dinner plates, entree plates, serving plates and charger. Each piece may be purchased separately (contact here) and although intended for display, can be used.