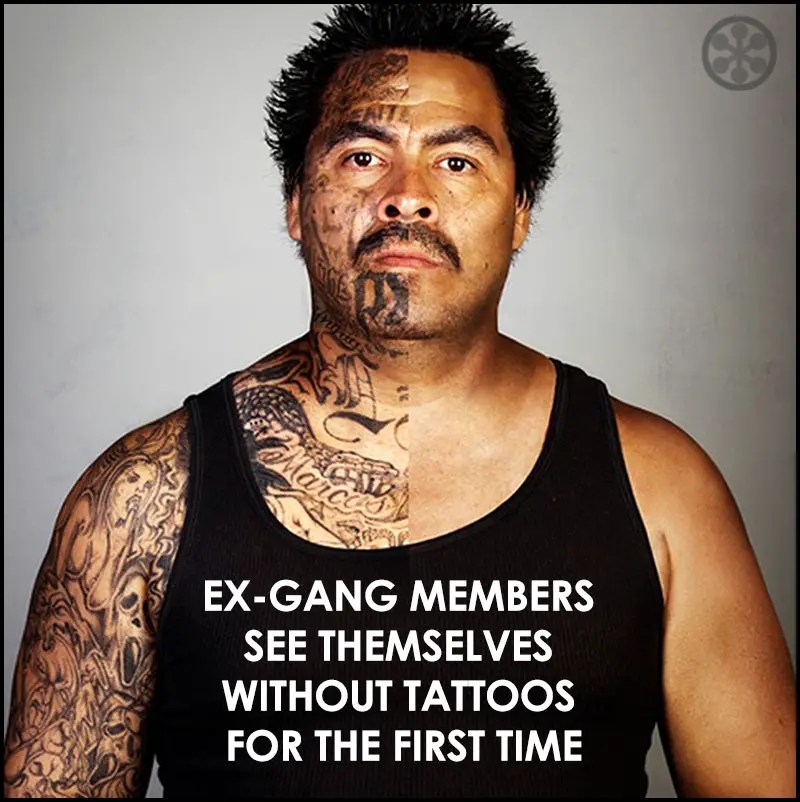 Photographer Steven Burton started his project, Skin Deep, with a simple premise: take heavily tattooed ex-gang members, digitally remove their ink and create before and after portraits. Teaming up with Homeboy Industries, an organization that supports ex-gang members and the previously incarcerated, the Skin Deep project has evolved into an emotionally charged series of images, insights and a newly published book.

Skin Deep – Looking Beyond The Tattoos

Burton wanted to understand the effect tattoos have on those who have escaped gang life as well as the effect they have on society. It took him two years and nearly 400 hours of re-touching to complete the series of side by side depictions.

After Burton removed the inked art from his subjects, he shared the images with these men and women, most of whom had not seen themselves without tattoos for decades. The social stigma they had endured often affected their own self-perception. The re-touched photos elicited very moving personal and emotional responses, several of which Burton has recorded.

Often demonized merely because of the skin art, Burton hopes to spread awareness and promote empathy for the struggles heavily tattooed gang members have to go through to escape their former lives in search of something better. 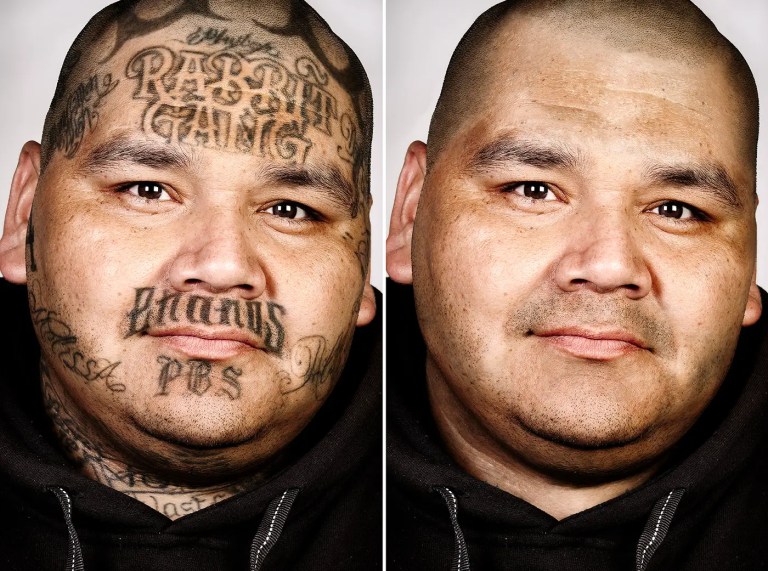 “Stereotyping is always going to be there like with the tattoos. I don’t want you rolling up your window when you see me coming down the street. It’s like come on man! It’s like I don’t need what you got. You don’t need to do all that. You know what I mean? I’m just passing right by you. I actually don’t even see you like that.” – Calvin Hastings R.I.P

Steven Burton received funding for Skin Deep via Kickstarter. A book has been published that features side by side portraits and the harrowing personal pasts as well as hopeful futures of the subjects.

The beautiful 8.5″ x 11″(21.5 x 28 cm) photography book has 172 pages. The book was said feature a lenticular printed cover (like the animated one shown below) and will be printed on high quality paper affording the reader a closer glimpse into the lives of these remarkable people and their daily journey to find their place in the world.

About Homeboy Industries:
Homeboy Industries provides hope, training, and support to formerly gang-involved and previously incarcerated men and women allowing them to redirect their lives and become contributing members of our community. Each year over 10,000 former gang members from across Los Angeles come through Homeboy Industries’ doors in an effort to make a positive change. They are welcomed into a community of mutual kinship, love, and a wide variety of services ranging from tattoo removal to anger management and parenting classes. Full-time employment is offered for more than 200 men and women at a time through an 18-month program that helps them re-identify who they are in the world, offers job training so they can move on from Homeboy Industries and become contributing members of the community.

all images courtesy of the photographer Steven Burton

A Look At The Barbie Shoot For The 2014 SI Swimsuit Edition.