` The 2017 Lavazza Calendar by Denis Rouvre on If It's Hip, It's Here
Skip to content 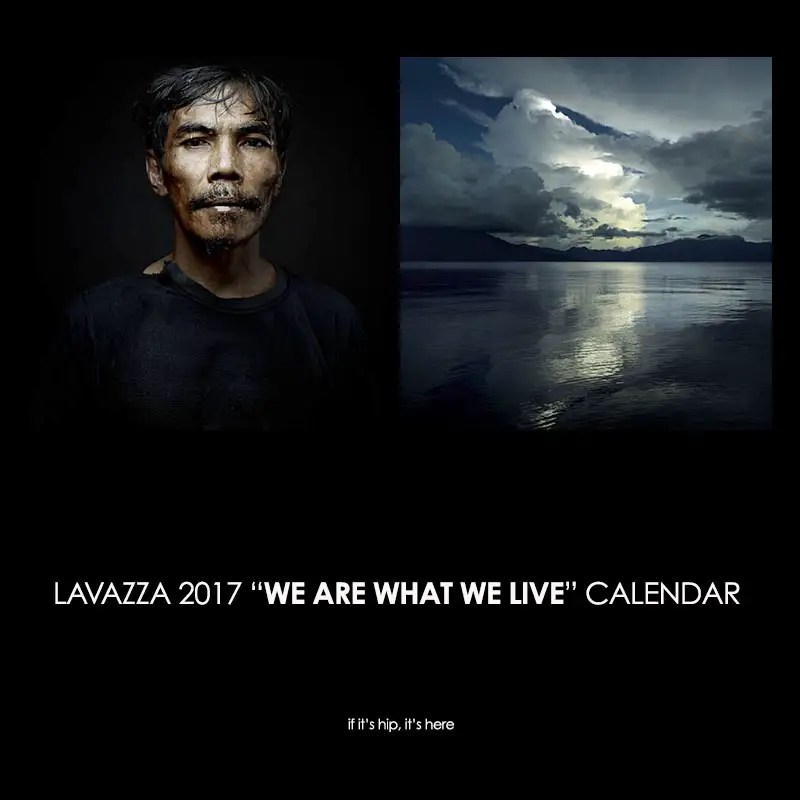 For several few years in a row, I covered the Italian coffee brand Lavazza’s unparalleled annual photographic calendars. At the time they would commission a different well-known photographer each year such as Finlay MacKay, Annie Leibovitz, Marc Seliger, or  Miles Aldridge. In 2015, Lavazza shifted their coveted calendars from being merely a visual treat to taking on a greater significance. With a more humanitarian angle, they began to produce calendars that focused on everyday heroes and true stories as opposed to fictional characters or models – still using world-renowned photographers. The 2015 Lavazza Calendar by Steve McCurry was the first in a trilogy of The Earth Defenders, conceived by Lavazza in collaboration with Slow Food. And for the first time ever, the Lavazza Calendar was available for purchase as a limited edition to support the project “10,000 Gardens in Africa.

That brings us to this year’s calendar, the last in the trilogy, and photographed by Denis Rouvre.

WE ARE what WE LIVE: The 2017 Lavazza Calendar by Denis Rouvre

The magic of the “geography of faces” plays a key role in the 2017 Lavazza Calendar, “We Are What We Live”,  the last journey in the trilogy of The Earth Defenders, conceived by Lavazza in collaboration with Slow Food. From India to Laos and Vietnam, from Sri Lanka to Indonesia, through the lens of photographer Denis Rouvre, the profound relationship between the land and the people who live on it is portrayed: a love for each coffee plant, the battle against a hostile climate, the desire to learn new techniques, respect for traditions and roles, the union of different communities in the same corner of the world.

Part humankind and part environment: the Lavazza “We Are What We Live” Calendar is composed of 12 sets of photos displayed side by side. On one side is the face of a man or woman laid bare, portrayed in their essence and naturalness. On the other is a place, a landscape, that represents the environment in which they live and the nature they work. In Rouvre’s pictures it is as if the two halves — humans and the environment — were overlaid and shaped each other: each portrait is also a landscape, and each landscape ends up being a portrait.

About the photographer (courtesy of Lavazza):
Denis Rouvre is a French photographer. Born in 1967, he lives and works in Paris.

Many of his works, which might be seen as real investigations into the power and fragility of man, have been exhibited both in France and internationally, at Rencontres d’Arles, FIAC, Art Paris, Pinacothèque de Paris, Tjibaou Cultural Centre in Nouméa, LiFE in Saint-Nazaire and many other venues.

He has received numerous prominent awards, such as the World Press Photo three times, in 2013 for an image from his series Sumo, in 2012 for a shot from his series Low Tide, in 2010 for his Lamb series, the SONY World Photography Award 2011 for his After Meeting collection, and a Hasselblad Masters Portrait in 2012. He published several books, including Sortie de match (Editions de la Martinière), Lamb (his work on Senegalese wrestlers) and Low Tide – Le Japon du chaos, both published by Somogy Editions d’Art. His most recent work, Identities, intimate territories, was also published by Somogy Editions d’Art in 2014.

His works are included in a number of public and private collections such as Pinacothèque de Paris, Société Générale and the Tjibaou Cultural Centre.

2017 Lavazza We Are What We Live Calendar