` Illustrated Harry Potter Covers - If It's Hip, It's Here
Skip to content For the 20th anniversary of the publication of Harry Potter and the Sorcerer’s Stone in the United States, Scholastic commissioned Brian Selznick, author and illustrator of Caldecott Medal-winning The Invention of Hugo Cabret, to reimagine the cover art for the entire Harry Potter series.

The last time we shared Harry Potter art with you were the beautifully illustrated versions by Jim Kay, for Bloomsbury publishing in 2014. Now, we have brand new covers for the series. Rendered in Selznick’s stunning signature black-and-white style with jewel-toned type, the seven new covers depict thrilling moments and beloved characters from across the series, including Harry Potter, Hermione Granger, Ron Weasley, Albus Dumbledore, and many more.

When placed side by side, the covers form a dazzling single image that tells the overarching story that begins with Harry’s arrival at Number Four, Privet Drive, through the epic conclusion of the Battle of Hogwarts. Sharp-eyed readers will spot intricate details throughout the artwork, such as Hermione’s Time-Turner, Harry’s Patronus, the maze from the Triwizard Tournament, and the Hogwarts Express steaming toward a new school year with the next generation on board.

Best known for his dramatic hand-drawn illustrations in his award-winning novel The Invention of Hugo Cabret, Brian Selznick said, “I’m a huge Harry Potter fan (a proud Hufflepuff!) and to be asked to illustrate the 20th anniversary edition covers was an absolute honor. I knew this project came with so much responsibility to the stories, as well as to the readers. I revisited the books and was especially moved by the relationships between the characters in J.K. Rowling’s magical world, so I wanted these covers to reflect that. One of the most challenging and rewarding aspects of the process was drawing seven independent covers that would stand on their own, while making sure that they also lined up to create one single satisfying image. It took dozens and dozens of sketches to get it right, and I am thrilled to share my great love for the books with these new illustrations.” 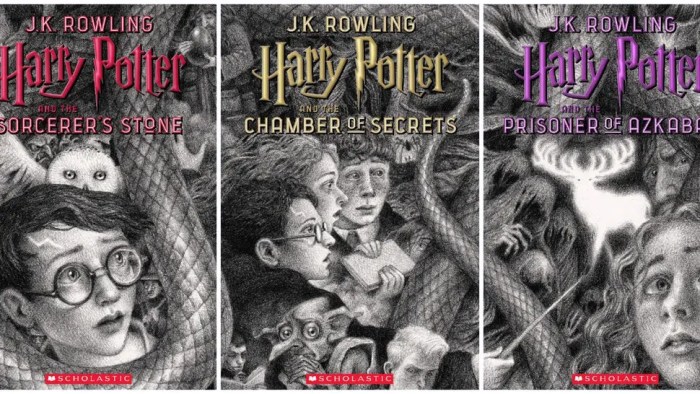 To date, the Harry Potter series has sold more than 180 million copies in the U.S. alone, and over 500 million copies worldwide. The books are published in over 200 territories in 80 languages and have been made into eight blockbuster films.

You can see the evolution of the Harry Potter Series book covers thanks to EW’s large online gallery here.

About author and illustrator Brian Selznick: Brian Selznick grew up in New Jersey and graduated from the Rhode Island School of Art and Design in 1988. He worked for two years after graduation at Eeyore’s Books for Children in New York City. His first book, The Houdini Box, which he both wrote and illustrated was published while he worked there.

Since then, Brian has illustrated many books for children written by others, including Frindle by Andrew Clements, The Doll People by Ann Martin and Laura Godwin, Amelia and Eleanor Go for a Ride by Pam Muñoz Ryan and The Dinosaurs of Waterhouse Hawkins by Barbara Kerley, which received a 2001 Caldecott Honor.

Selznick has also written several books of his own including The Boy of a Thousand Faces, The Invention of Hugo Cabret, Wonderstruck, The Marvels and his newest, Baby Monkey, Private Eye.

He lives in Brooklyn, New York, and San Diego, California, with his husband David Serlin.
images courtesy of Scholastic and Brian Selznick