` Remembering Sam Shepard through Photos and Accomplishments
Skip to content

He was cool. He was smart. He was sexy. He was Sam Shepard, a brilliant playwright, talented actor and all around badass who he lost his life to ALS, otherwise known as Lou Gehrig’s disease, yesterday at the age of 73. We take a look back at his impressive career, life, loves and accomplishments. 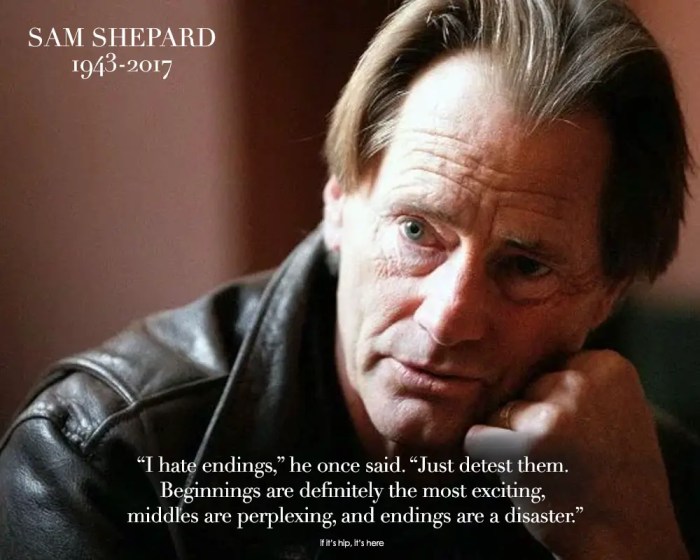 Best known for his role as astronaut Chuck Yeager in 1983’s The Right Stuff, some older folks recall him as Jessica Lange’s boyfriend for decades (the two lived together from 1982 to 2009).

The young folks know him from his recent turn as family patriarch in the Netflix drama Bloodlines.

Film-buffs know him from his enormous repertoire of movies (an actor in 68 movies and a writer of 26 and a director of 2), and the more intellectual know him as a Pulitzer prize winning playwright.

Whether you recognize his voice as a narrator, his face from the movies or his poetic writing, his impressive accomplishments changed the world of American Theater and Cinema.

Sam Shepard was born in 1943 in Fort Sheridan, Illinois to Jane Elaine (Schook), a teacher, and Samuel Shepard Rogers, a teacher and farmer who was also in the army. As the eldest son of a US Army officer (and WWII bomber pilot), Shepard spent his early childhood moving from base to base around the US until finally settling in Duarte, California. While at high school he began acting and writing and worked as a ranch hand in Chino. He graduated high school in 1961 and then spent a year studying agriculture at Mount San Antonio Junior College, intending to become a vet. He has written more than forty plays, of which eleven have won ‘Obie’ awards, besides collections of stories, prose writing and screenplays.

He lived a life filled with creativity and interesting people. He was married to actress, composer, and sound designer O-lan Jones from 1968- 1984 with whom he had one son in 1970, Jesse Mojo.

He lived with actress Jessica Lange from 1982 to 2009 with whom he fathered two children, daughter Hannah Jane Shepard in 1986 and son Samuel Walker Shepard in 1987.

He moved to New York from California just as the off-Broadway theatre scene was emerging. In the late 60’s he flirted briefly with the world of rock and roll as a drummer and a guitarist for the late 1960s bands “Lothar and the Hand People” and “The Holy Modal Rounders.”

In 1971 he moved to London where he continued to write for a few years, returning to the U.S. in 1974. Back in the US he became playwright in residence at San Francisco’s Magic Theater and continued to work as an increasingly well respected playwright throughout the 1970s and into the ’80s.

He wrote the 1971 play “Cowboy Mouth” with then girlfriend rocker Patti Smith and played in the very first production the role of Slim (with Smith in the role of Cavale).

He collaborated with Bob Dylan in writing the eleven-minute song “Brownsville Girl,” which appeared on Dylan’s 1986 album “Knocked Out Loaded.”

Some interesting articles about and interviews with Sam Shepard worth checking out:
• 1986 Interview with Rolling Stone

• The NY Times on Sam Shepard’s Plays, Books and Movies

In a fortuitous move, a new book on the life of Sam Shepard was by John Winter was just published. The 9 Finalists For The New Mississippi Flag Design

The Astounding Range Of Creative Talent Known As Rankin.

Hollywood Easter Photos : The Weird and The Wonderful