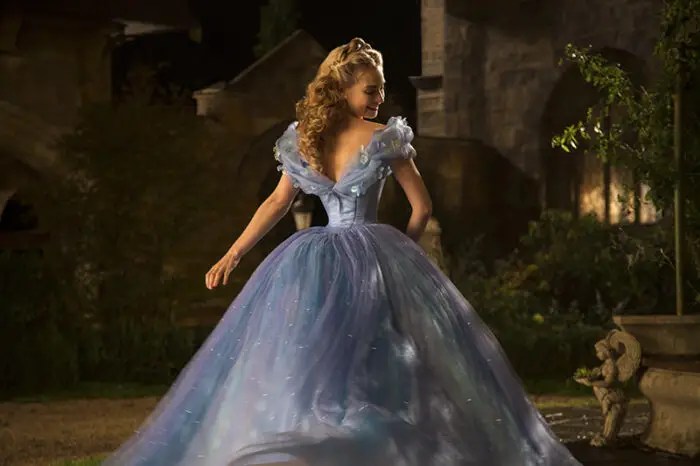 “Saks aims to bring back the magic in retail, and what better way to celebrate than enchanting our customers with dazzling footwear fit to make any dream come true.” The Cinderella Slipper (shown above) that appears in Disney’s 2015 movie was produced by Swarovski under the direction of Academy Award-winning costume designer Sandy Powell.

Below the designers share sketches of the shoes and the inspirations for their designs. “I think every girl desires a Cinderella moment in their lives. This story ignites a love affair and fascination with shoes that never dies. The power they have to transform is instilled from a young age and the fantasy remains alive forever. I wanted to create a shoe that felt magical, with alluring sparkle and a feminine, timeless silhouette evoking those childhood emotions.” –Sandra Choi, creative director for Jimmy Choo

“Passion and never ending research don’t draw the line at fantasy and creativity. This is how dreams come true in our fairy tale.” — René Caovilla 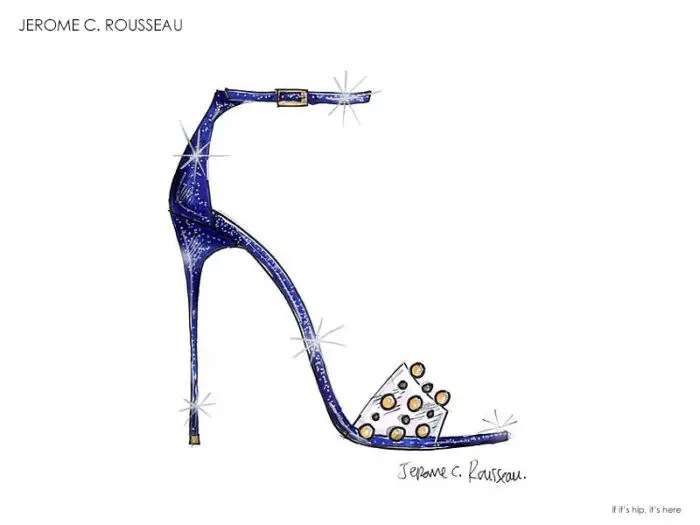 “The stroke of midnight is a wonderful element of the Cinderella fairy tale, it adds tension and intensity to the story. I was inspired by that when I designed this style for Cinderella and the result is a dramatic midnight-blue glitter sandal on a sky-high heel.” — Jerome C. Rousseau “It’s a shoe I imagine a modern princess would wear.” — Alexandre Birman 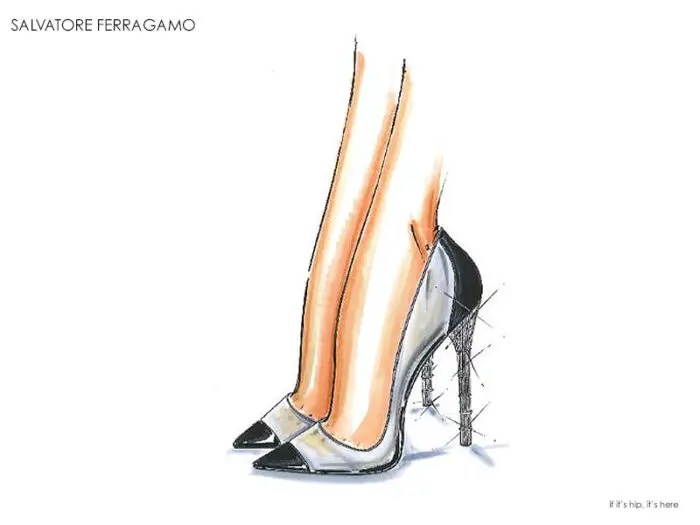 “The magic of a shoe that turns a woman into a princess and gives her the feeling of walking on clouds is a universal dream.” — Massimiliano Giornetti, creative director at Salvatore Ferragamo “Cinderella has both delicate and strong qualities as a character. The moment of transformation emphasizes both and gave me the design inspiration to create a piece that spoke to the film’s magic.” — Nicholas Kirkwood “This transparent platform shoe made with my signature PVC & perspex materials is adorned with star and crystal detailing as befits any princess.” — Charlotte Olympia “Cinderella in 2015 has a timeless appeal. The diamond and translucent bootie enhance the vision I have of her.” — Stuart Weitzman “The story, being a classic, inspired me to use my iconic pointed toe silhouette, which I embellished with an array of hand encrusted Swarovski crystals to create the ultimate fantasy shoe. I used transparent PVC to create a ‘glass’ effect and ivory suede for luxurious texture and dimension.” — Paul Andrew

“The tale of Cinderella is rich in romance and tradition thus the collaboration between Saks Fifth Avenue and Disney felt natural,” said Mark Briggs, Chief Marketing and Creative Officer. “Saks aims to bring back the magic in retail, and what better way to celebrate than enchanting our customers with dazzling footwear fit to make any dream come true.”

In early March, Saks Fifth Avenue will bring Disney’s “Cinderella” to life by creating enchanting fairytale vignettes within the center six windows of its New York flagship as well as select windows in its Beverly Hills location. The windows will prominently feature the complete designer footwear collection as well as select props from the film, including costumes and spellbinding pumpkins. In addition to the windows, both locations will display the footwear collection on 10022-SHOE, Saks’ dedicated shoe floor Zip Code. Lily James and Richard Madden will also star on the covers of Saks Fifth Avenue’s latest March Magalog – the new, elevated rendition of its fashion catalog. The Magalog debuts March 4, 2015. 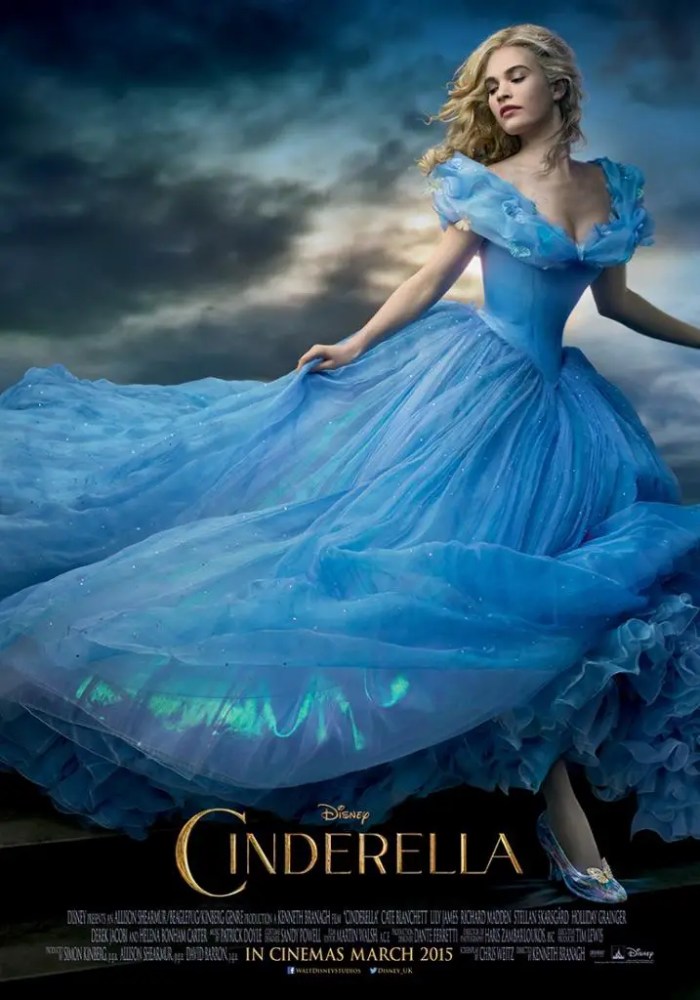 UPDATE: See all the final designs for the shoes now here 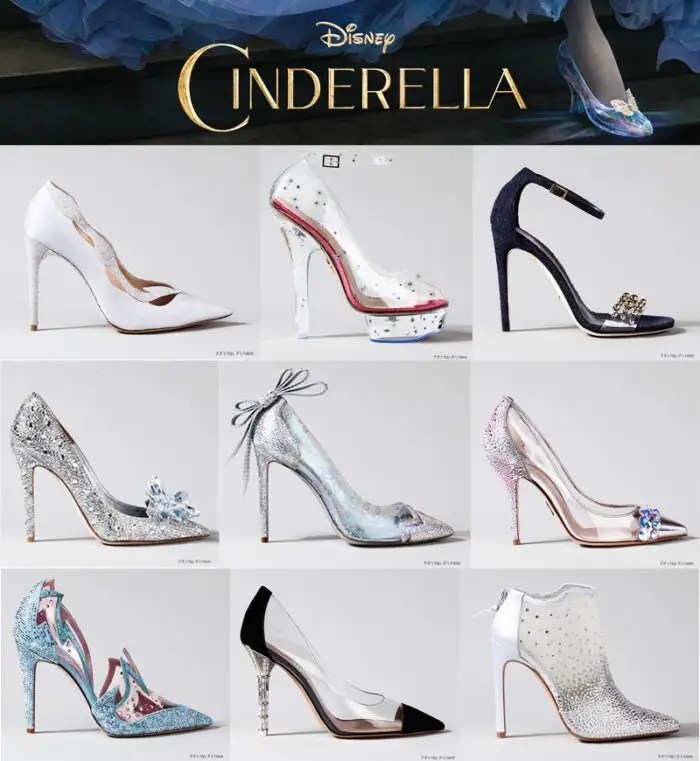 This is not the first time shoe brands have re-created a shoe from a classic book/movie. Designers did the same with Dorothy’s Ruby Slippers from the Wizard of Oz a few years back. The resulting designs were truly wicked.