you are here: if it's hip, it's here » art » art and fashion collaboration » To Celebrate Oz’s 70th, Designers Re-do Dorothy’s Kicks With Proceeds Benefitting Charity

above: Sergio Rossi, Gwen Stefani and Moschino’s sketches of their versions of Dorothy’s ruby slippers

Now faded, below are the ruby slippers worn by Judy Garland in The Wizard of Oz, designed by Hollywood costume designer Gilbert Adrian in 1938. His first Arabian-style test pair was deemed too exotic for Dorothy (now in a Private collection.) 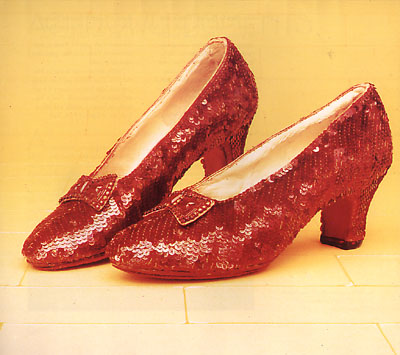 “If Dorothy were living in the 21st century, what would she wear?” is the question being answered by The Wizard of Oz Ruby Slipper Collection, a creative re-interpretation of one of film’s most iconic and revered symbols that has captured the hearts and imaginations of people the world over.

In anticipation of the 70th anniversary of The Wizard of Oz in 2009, Warner Bros. Consumer Products in partnership with CRYSTALLIZED(TM) – Swarovski Elements, have invited the world’s top shoe designers to reinterpret Dorothy’s iconic Ruby Slippers for modern times. The exclusive collection will be auctioned with the proceeds benefiting the Elizabeth Glaser Pediatric AIDS Foundation.

above: Amy Smilovic for Tibi sketch

above: A. Testoni sketch

“The Wizard of Oz is a quintessential and endearing story that has touched countless people all over the world during the last 70 years,” said Karen McTier, Executive Vice President of Domestic Licensing and Worldwide Marketing, Warner Bros. Consumer Products. “We are proud to be the stewards of this timeless classic and are excited to share with fans the beautiful and fun modern interpretations of Dorothy’s Ruby Slipper with this exciting new collection.”

Nadja Swarovski adds, “We’re thrilled to turn fashion’s spotlight on the most iconic pair of shoes, Dorothy’s Ruby Slippers, to celebrate the 70th anniversary of The Wizard of Oz. As Hollywood’s premier crystal purveyor, Swarovski feels privileged to be a sparkling element of the original pair and now, we are looking forward to new creative interpretations of the Ruby Slipper for the 21st century by these talented designers.”

The designers have been granted creative license and access to unlimited CRYSTALLIZED(TM) – Swarovski Elements to re-imagine Dorothy’s design with their own modern vision of the sparkling Ruby Slipper. The Wizard of Oz Ruby Slipper Collection will be on display for one week and officially unveiled at Saks Fifth Avenue – in the famed Fifth Avenue windows and 10022-SHOE – the designer shoe salon that’s so big it has its own zip code. An in-store gala event on the evening of September 4 will launch Mercedes-Benz Fashion Week in New York. The event will benefit philanthropic partner Elizabeth Glaser Pediatric AIDS Foundation and kick-off support for the Foundation’s annual Kids for Kids Family Carnival.

Steve Sadove, Chairman and CEO of Saks Fifth Avenue said, “We are so pleased to be hosting such a creative and innovative tribute to the American classic film The Wizard of Oz. The Ruby Slippers play an integral role in the film and Saks Fifth Avenue is honored to be the destination for the most celebrated designers and their contemporary take on these iconic shoes.”

“It’s only appropriate to bring such a cultural icon to center stage at this season’s Mercedes-Benz Fashion Week,” said IMG Fashion Senior Vice President Fern Mallis. “The Wizard of Oz is a true classic, it will never go out of style and who doesn’t want a pair of Ruby Slippers?”

After Mercedes-Benz Fashion Week wraps the Ruby Slipper Collection will make an appearance at Elizabeth Glaser Pediatric AIDS Foundation’s Kids for Kids Family Carnival in New York City’s Park Avenue Armory Building on September 20. “We are absolutely delighted to be a part of this re-imagining of the Ruby Slippers–these iconic fashion images that also represent the power of positive thinking,” says Pamela W. Barnes, CEO and President of the Elizabeth Glaser Pediatric AIDS Foundation. “We are certain that the Ruby Slipper Collection will inspire the hearts and imaginations of the next generation as we work together to combat HIV/AIDS around the world.”

Following a year of being highlighted at special events around the country, the complete and original The Wizard of Oz Ruby Slipper Collection will be auctioned at a gala event in fall 2009 with the proceeds benefiting the Elizabeth Glaser Pediatric AIDS Foundation.

About The Wizard of Oz
The Wizard of Oz is one of the most beloved and iconic motion pictures of all time filled with timeless sentiments and values cherished by multiple generations. Originally released in 1939, more than one billion consumers have experienced the classic story of Dorothy and friends in the Land of Oz 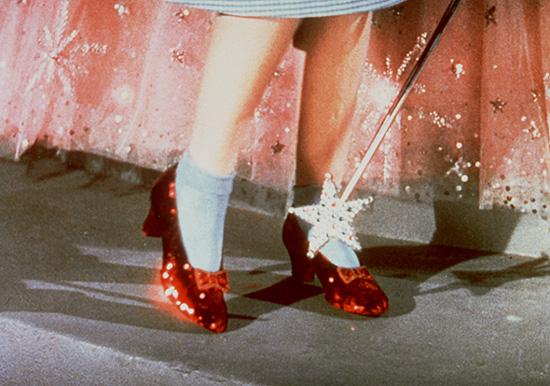 above: A still from Warner Brother’s Wizard Of Oz, 1939

The Elizabeth Glaser Pediatric AIDS Foundation is a worldwide leader in the fight against pediatric AIDS. Its innovative research programs, collaborative training initiatives, advocacy efforts, and rapidly expanding international prevention and treatment programs are bringing dramatic changes to the lives of children worldwide. To learn more about the Elizabeth Glaser Pediatric AIDS Foundation and its programs, visit www.pedaids.org.

THE WIZARD OF OZ and all related characters and elements are trademarks of and (C) Turner Entertainment Co.