you are here: if it's hip, it's here » advertising » tv commercials » New Michelin Ads: Proof That The Right Execution Changes Everything.

Michelin’s latest advertising campaign, “The Right Tire Changes Everything” has refreshed an ad icon that was fast fading into “Speedy -Alka Seltzer-land.” But thanks to a new advertising campaign by TBWA/Chiat/Day, New York, the lovable white tower of tires, known in the US as The Michelin Tire Man, is back with a vengeance.

The recent animated Michelin television commercial “Evil Gas Pump” directed and edited by Pysop, has been making the rounds on blogs and magazines and winning honors and accolades in several trade publications. With its digital rejuvenation of the beloved Michelin Man, the spot deserves the kudos.

But the next one, is just as fabulous, if not more so. Saddest Road is the second in the animated series, soon to be followed by a third. Once again, the animation and music are wonderful and Bibendum, (our tire man’s actual name) is once again a hero worth worship.

Take a look at “Saddest Road”:

I am not sure the same creative team at TBWA/Chiat/Day New York did all the spots, but at the end of this post are the credits for Evil Gas Pump.

The print work, while attractive, is no breakthrough creative, given it is just a lift from the television and the headline is a disappointing rehash of the tagline. But I suppose you could argue the cop out that it’s a cohesive campaign because both the tv and print showcase the wonderful animation.

Examples of the print work for Michelin: 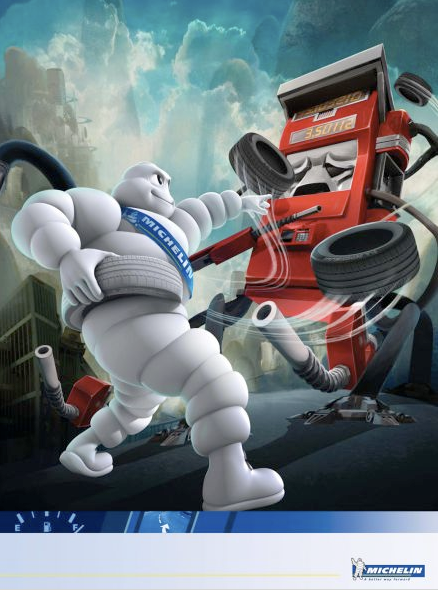 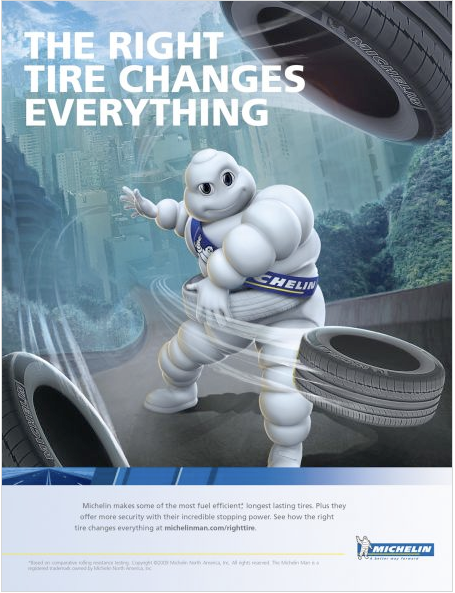 According to Michelin Corporate’s press release “The new campaign’s slogan – “The right tire changes everything” – is intended to illustrate the competitive advantages of Michelin tires in media outlets around the world.” The worldwide campaign initially launched in the United States in early October and then will gradually be deployed in 55 countries – in Europe and Asia in early 2010, followed by Africa, the Middle East, India and South America.

They also designed a new US site for the brand: 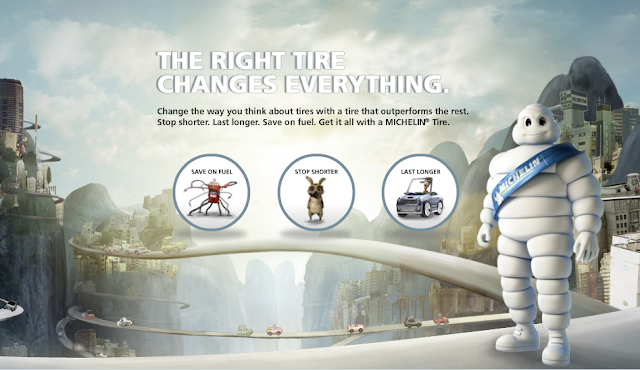 above: the home page of the new site.

According to Adweek, the fourth quarter advertising effort cost $20 million. 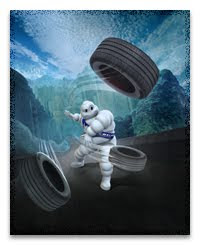