One of the best commercials touting the upcoming World Cup is part of a creative and inspiring larger digital push by McDonald’s.

McDonald’s Marketing for the 2014 World Cup

Since this post was originally written, all the television spots and promotional videos have been removed, but the marketing effort from McDonald’s also included a global package redesign of their iconic french fries packaging by 12 street artists and we still have those to share. 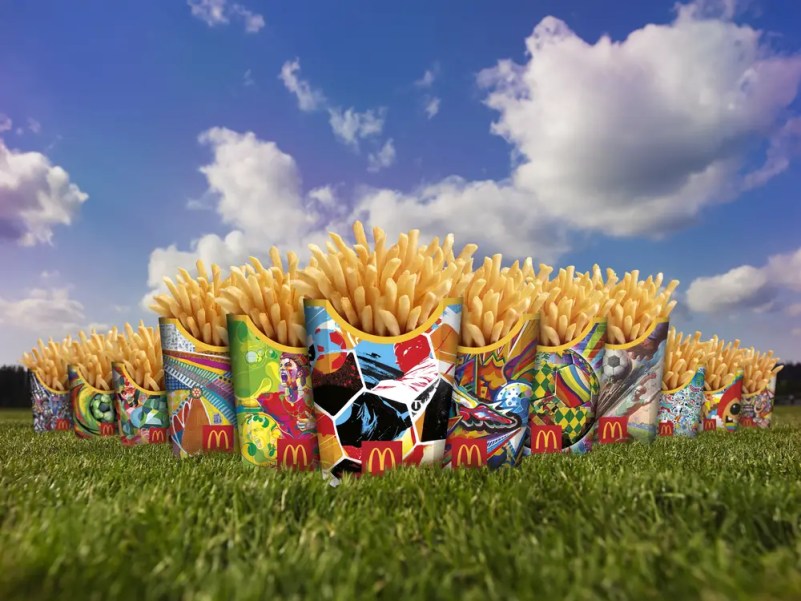 The brand has changed the look of its iconic red French fry packaging globally with bold, new artwork to celebrate the upcoming FIFA World Cup™ in Brazil. In addition, the new fry boxes will be the key to “unlocking” the new Augmented Reality app that will reward customers with an engaging, virtual trick-shot challenge. The redesign will treat customers and futbol fans with an exclusive collection of original street art that reflects the beauty and passion of the game of futbol. Twelve artists from around the world were chosen to create the special new designs which will canvas McDonald’s Medium and Large fry boxes in the majority of company-owned and franchised restaurants worldwide: 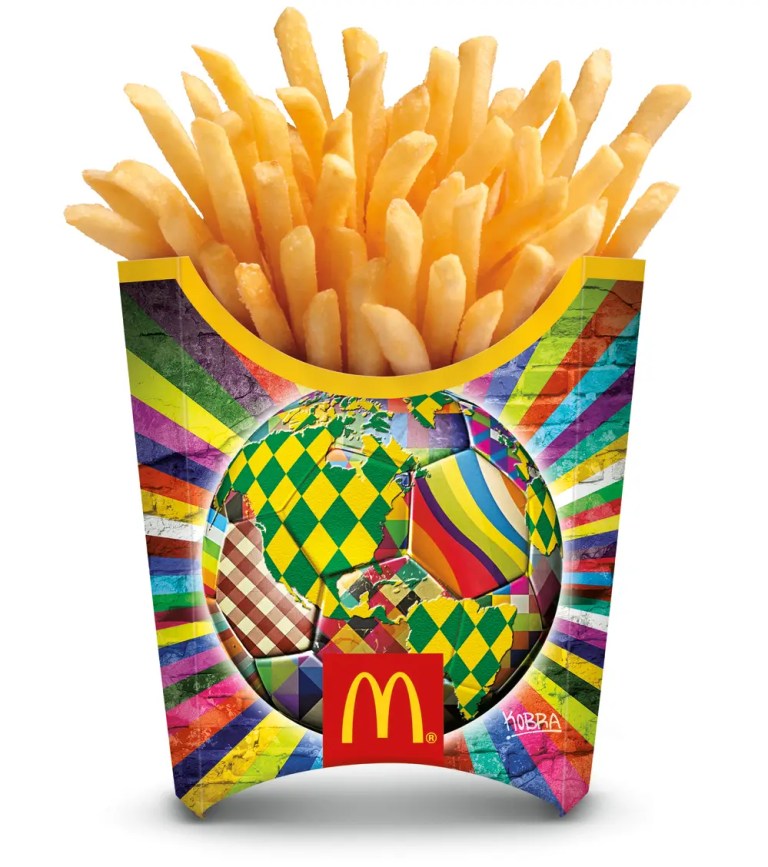 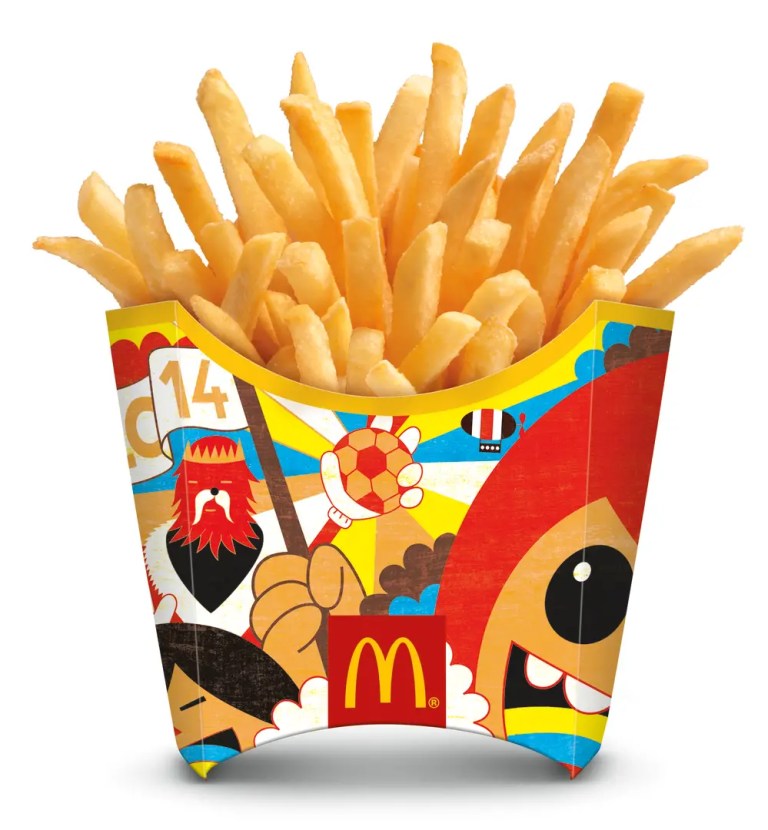 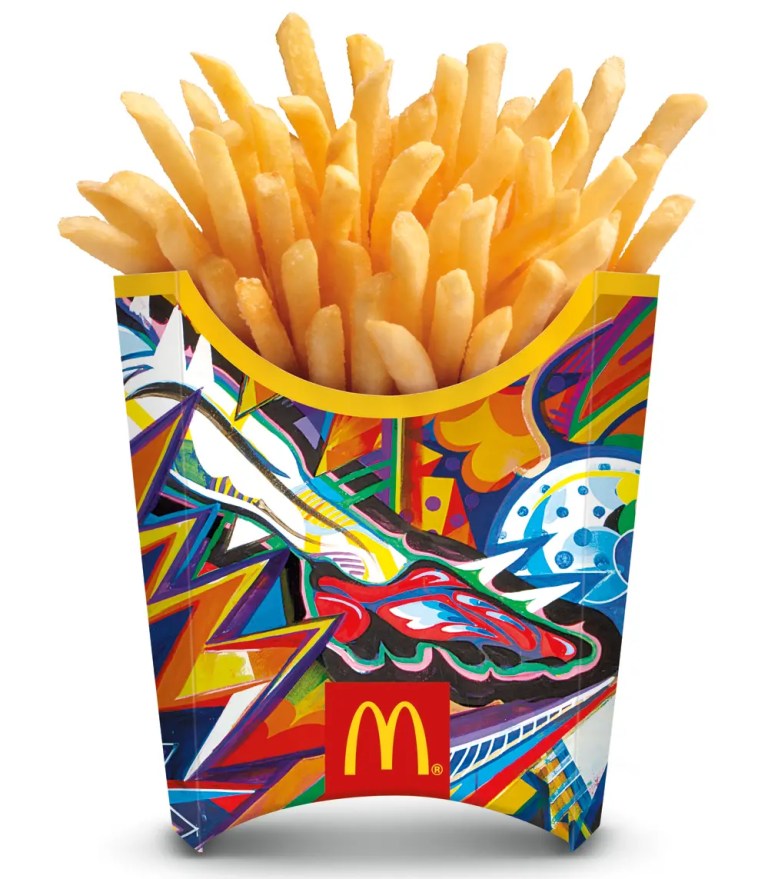 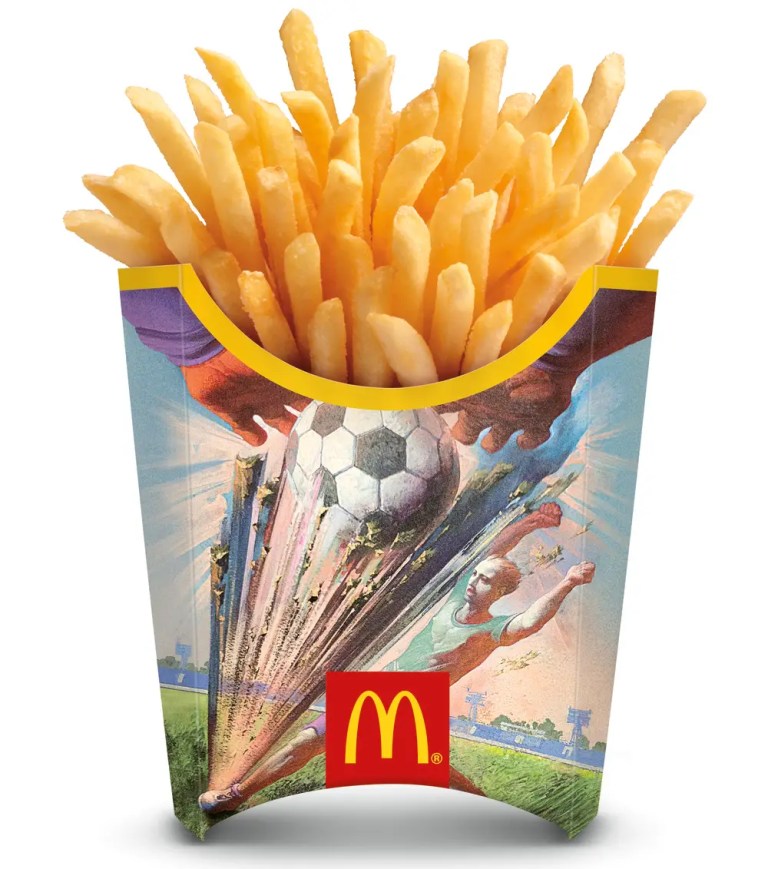 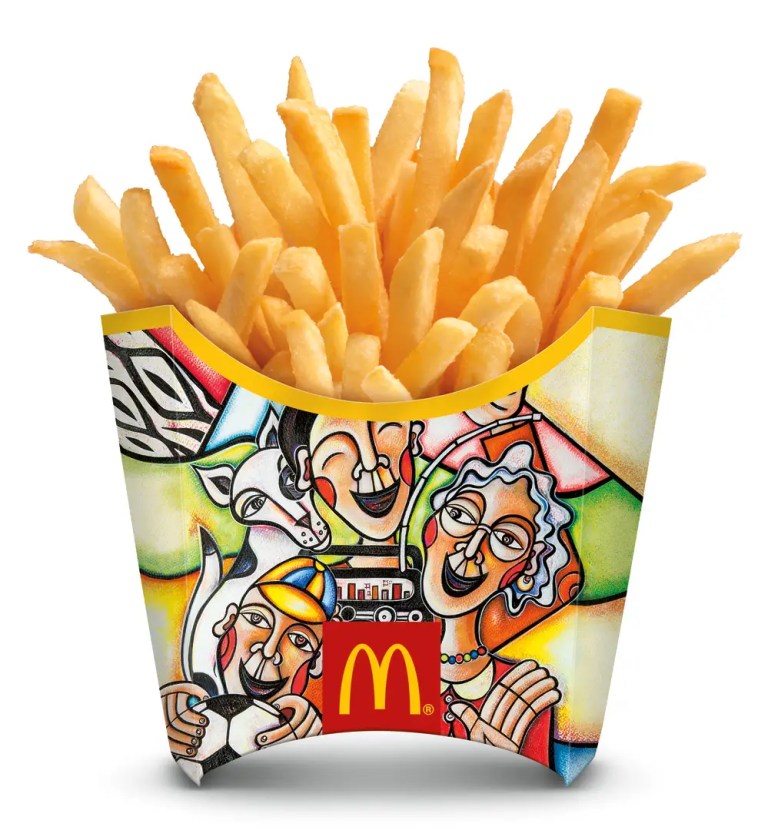 The Virtual Reality App
The 12 new french fry box designs trigger the downloadable app, ‘McDonald’s GOL!’ – Customers download the app and begin play as soon as they have their specially-designed fry box in-hand. It’s as easy as holding the screen of their mobile device up to the front of the box. As the device recognizes the artwork, a futbol pitch will appear in an AR scene on the screen, with the fry box as the goal and other built-in objects as obstacles. The idea is to ‘kick’ the ball with the flick of a finger and divert or use obstacles to get the ball into the goal. McDonald’s GOL! — App demo FIFA World Cup 2014
In honor of the FIFA World Cup™, McDonald’s searched the globe for the most talented trick shot heroes. And now you can show them what you’ve got.

App Demo:To play the full game just grab the app and a box of limited edition FIFA World Cup™ McDonald’s Fries. Or, if you’ve not got fries, download now to play the time trial game. Go to gol.mcd.com or search McDonald’s GOL! in the Google Play or App Store.

The box itself appears as a goal, while other packaging such as a Big Mac boxes will appear as objects the player can move the ball around to help them score goals. Players can share their results on social media, while McDonald’s is keeping a running tally of each country’s overall performance.

Steve Easterbrook, senior executive vice president and global chief brand officer of McDonald’s, says: “This is the first time in brand history we’re changing the packaging design of one of our customers’ most favourite menu items on a global scale, and what better reason than to share in the excitement of one of the most prestigious sporting events in the world.”

The launch furthers McDonald’s push into the mobile space following the launch of a mobile coupon app and a click-and-collect service. The restaurant sees the channel as a key path to winning back younger customers who have moved onto rivals such as Subway and Nando’s. It hired its first chief digital officer Atif Rafiq last October to shape the digital drive around ecommerce, emerging platforms and multichannel marketing.

Rafiq adds: “Our digital vision at McDonald’s is to bring an entirely new level of everyday convenience and fun to the world, and our Augmented Reality app is just one example of how we are bringing fun to our customers’ lives.”

“We are very excited about the numerous opportunities in front of us to bring even more innovative digital experiences to our customers in ways only McDonald’s can do.”

McDonald’s had appointed former Amazon senior marketer Atif Rafiq last October to the then newly-created role of chief digital officer in an attempt to forge a more comprehensive global strategy around online channels.