` LED Surfboards Light Up The Ocean. - If It's Hip, It's Here
Skip to content 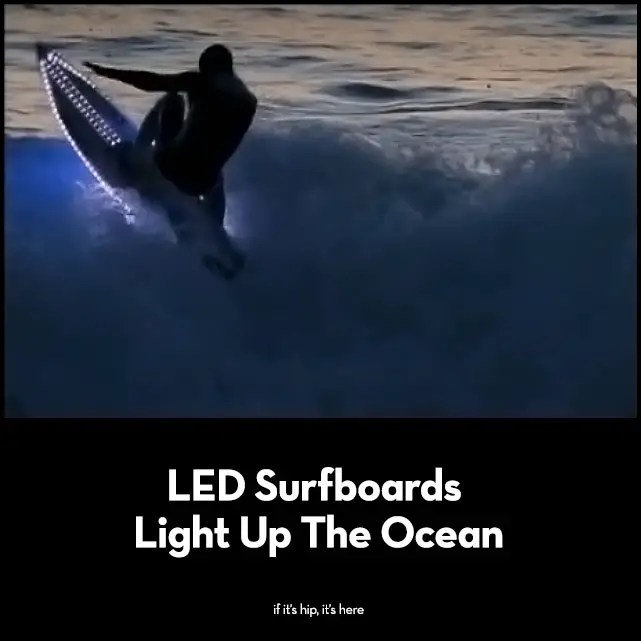 Pukas, who has the biggest surfboard factory in Europe, designed some special awesome colored LED surfboards. Along with Juan Mari Indo, they developed the technology and aesthetics of the lightweight glowing boards and sent them off to some surfers to try them out.

LED Surfboards Light Up The Ocean Surfers Tiago Pires and pro-surfer Joan Duru were filmed surfing on the LEDs by Puka in the following video:

In the video below you can listen to Juan Mari Indo’s thoughts on the surfboards, a decorator-adventurer-artist who has been key on the development of the LEDs, along the whole crew at the Pukas factory, specially Johnny Cabianca: Some of the “Leds by Pukas” were sent to Portugal for Tiago Pires’ joy. The second surfboard was pro-surfer Joan Duru’s new toy. And the third, well, the third didn’t last too much as Aritz thought surfing on a solid 6ft. barreling swell on Hossegor’s beachbreaks would look great. It looked amazing indeed, but it was a 5’6 meant to be ridden for airs or less heavy stuff. No photos or videos for his attempt and that board ended up broken (sad face). Nike 6.0 launched a huge campaign for The Chosen featuring 22 year old Biarritz surfer Naum Ildefonse surfing with the “Leds by Pukas”, directed by Surface to Air: So if you feel like ordering the most special surfboard you could ever imagine, send them an e-mail at [email protected] because you might be able to own one…

About Pukas Surf:
Their surfboard factory is the biggest in Europe, placed between Mundaka and Hossegor in the nearby area of San Sebastian and Zarautz, Spain’s Basque Country. The shops and the surfschools are part of a group that employs close to a hundred people.

Thanks to Pukas and Fitenia Surf Shop for additional images

The Expandable Yacht. The Wider 42’ and Their New Cote D’Azur Edition.