` Leather Animals In A Paper Jungle For Hermès Window Installation. - If It's Hip, It's Here
Skip to content 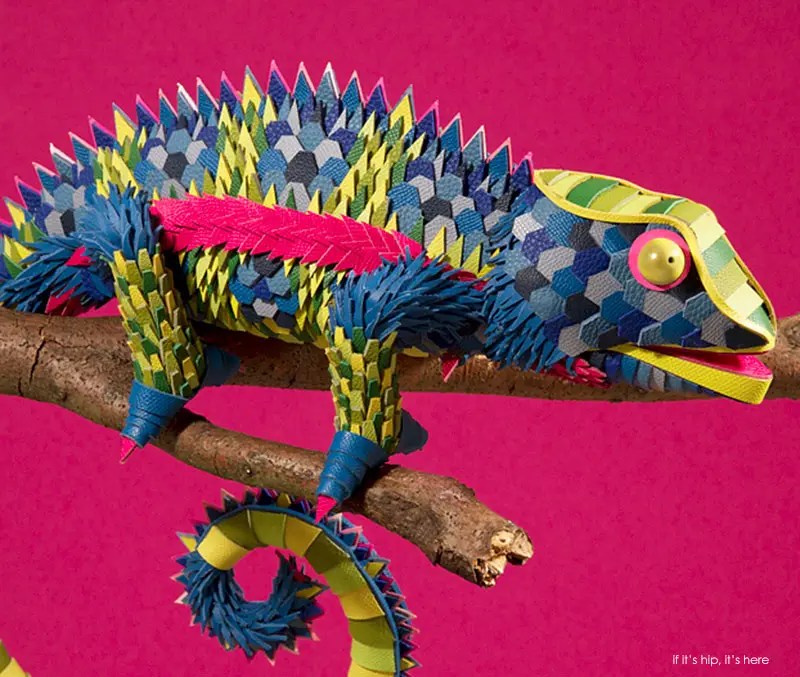 For its 13th Carte Blanche, the Hermès store at Hong Kong International Airport is exhibiting a piece by French artists Zim and Zou,’The Eternal Jungle’, which is an invitation into the wild.

The window installation creates an intriguing contrast between the jungle, a world that is dominated by wild animals, and one of great refinement, the world of Hermès. The window is influenced by the abundance of vegetation in Hong Kong and showcases Hermès accessories (such as scarves, jewelry, bets and ties) and a Monkey, a Toucan and a Chameleon crafted of leather off-cuts from the workshops of Hermès.

If this sounds a little familiar, it is much like the lovingly crafted animals made with Louis Vuitton leather goods for their window displays by Billie Achilleous. The installation displays the finest skills in paper-cut art and leatherwork. Remaining faithful to its original purity, the artists create intricate objects with the paper, a material both beautiful and versatile. Now, a close look at the impressively crafted animals. The Monkey in the display: The Toucan in the display: The Chameleon in the display: The window as it appears in the Hong Kong International Airport: Some of you may recall that I previously posted about the work of Zim and Zou when I featured their retro 80’s tech products made entirely out of paper.

Here’s another  great post about another artist, Billie Achilleos, who has crafted small animals of leather for Louis Vuitton Window displays.