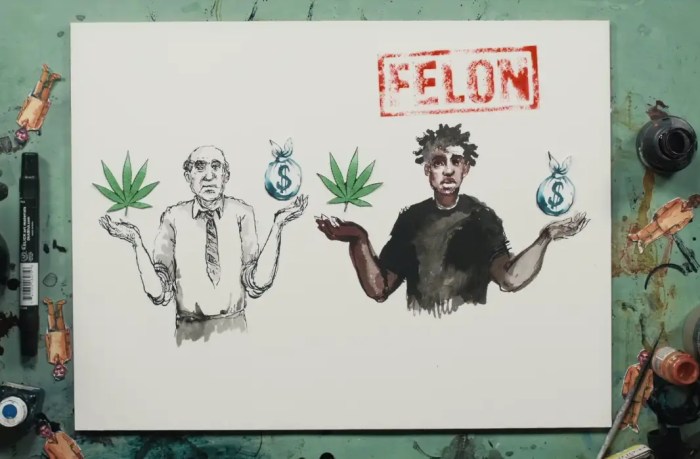 Narrated by Jay Z (Shawn Carter) and featuring the artwork of Molly Crabapple, this 4 minute video is part history lesson and part vision statement about the war on drugs.

Illustrated History of the War on Drugs 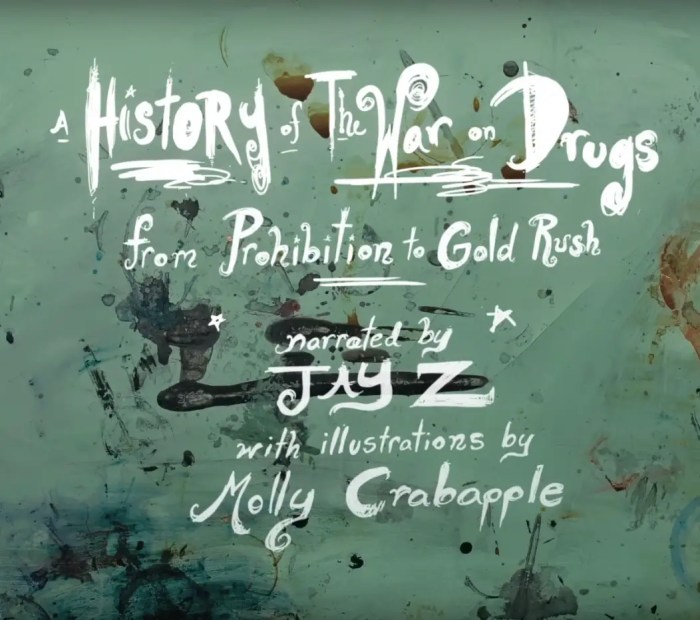 This short film, an illustrated History of the War on Drugs, produced by Dream Hampton, Revolve Impact and in partnership with the Drug Policy Alliance is narrated by Shawn “Jay Z” Carter and features the artwork of Molly Crabapple. It takes on the war on drugs from the extraordinary growth in our nation’s prison population to the emerging above ground marijuana market of today.

History of The War On Drugs from Prohibition to Gold Rush:

The film is set to the time lapse illustrations of Molly Crabapple’s moving artwork.  It takes us from the Nixon administration and the Rockefeller drug laws — the draconian 1973 statutes enacted in New York that exploded the state’s prison population and ushered in a period of similar sentencing schemes for other states — through the extraordinary growth in our nation’s prison population to the emerging above ground marijuana market of today. We learn how African-Americans can make up around 13 percent of the United States population — yet 31 percent of those arrested for drug law violations, even though they use and sell drugs at the same rate as whites. The video and critique of the drug war comes a few months after an unprecedented group of voices called for an end to the war on drugs. In April, on the eve of the 2016 United Nations General Assembly Special Session (UNGASS) on the World Drug Problem, world leaders and activists signed a letter to UN Secretary General Ban Ki-moon urging him to set the stage “for real reform of global drug control policy.”

Last year, Dream Hampton, the filmmaker and a co-author of Jay Z’s book “Decoded,” approached the Drug Policy Alliance about collaborating with Revolve Impact, the social impact agency she works with. Revolve Impact connects artists and influencers to community organizers, and with marijuana legalization taking hold across the nation — and about to be considered in her own state, California — Ms. Hampton wanted to tackle the contradiction raised by Michelle Alexander, the author of “The New Jim Crow: Mass Incarceration in the Age of Colorblindness,” in 2014: Why were white men poised to get rich doing the very same thing that African-American boys and men had long been going to prison for? Ms. Hampton proposed creating an animated video that the D.P.A. would produce about the impact of the drug war in African-American communities.

“Jay Z and Molly Crabapple’s groundbreaking video will educate millions of people about the devastation wrought on the African American community because of the drug war,” said Asha Bandele, Senior Director for Grants, Partnerships and Special Projects at the Drug Policy Alliance. “That it is offered at a moment when policymakers are finally joining advocates in demanding an end to the architecture that actually incentivizes biased policing and police violence makes it especially timely,” said Bandele.

Policy makers are joining advocates in demanding an end to biased policing and mass incarceration, and in November, Californians specifically have the opportunity to vote Yes on Prop 64, the most racial-justice-oriented marijuana legalization measure ever.

Prop 64 would reduce (and in many cases eliminate) criminal penalties for marijuana offenses, and it’s retroactive — people sitting in prison for low-level marijuana offenses would be released and have their records expunged. In addition, Prop 64 would drive millions of dollars in direct funding and investments to those communities most harmed by the criminal justice system. 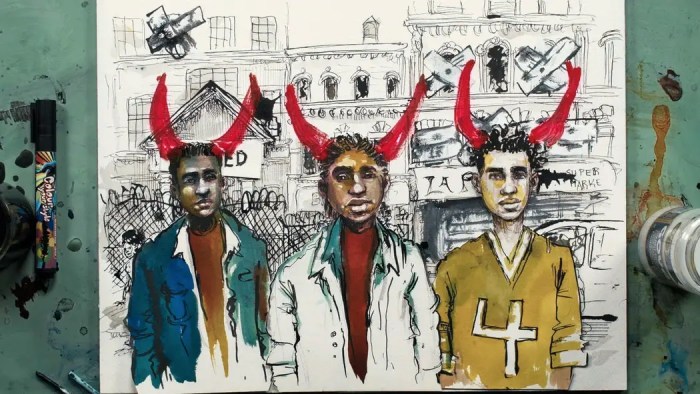 Jay Z and Molly Crabapple are inviting us all to stand on the right side of history.

A Good Look at the Louis Vuitton Celebrating Monogram Collection by 6 Iconoclasts. (35 Photos)