` Footballer Thierry Henry 5 Story Fishtank - If It's Hip, It's Here
Skip to content 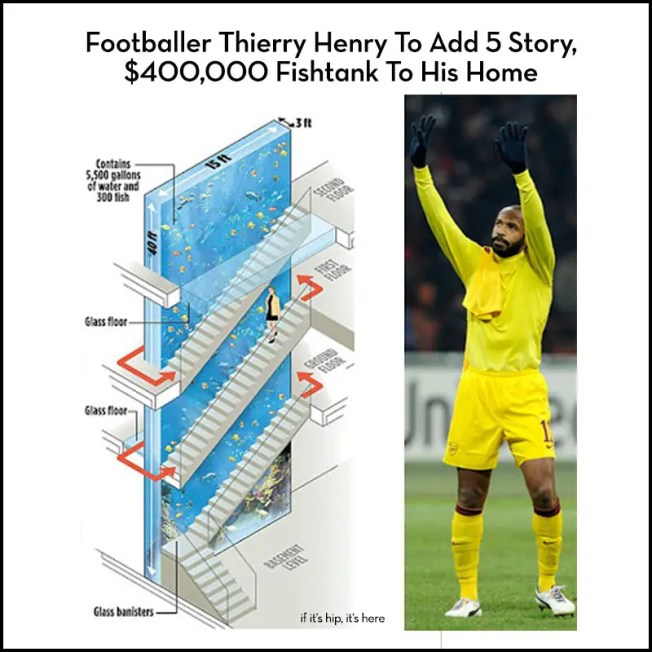 The French footballer, above, who fronted the ‘va-va-voom’ TV adverts for car firm Renault – is the latest in a long line of celebrities including Madonna, the Beckhams, Cher and Premier League footballers Stephen Ireland, Joe Hart and Micah Richards, to splash out on opulent fish tanks.

Ireland has reportedly spent more than £100,000 on his 13ft aquarium, and is now believed to be planning a shark tank under his kitchen floor.

His aquarium will actually be made up of four separate tanks, one for each story of the house. Each will be made of Perspex-like material and will give the optical illusion of one giant aquarium – but will be cheaper to clean, run and maintain than a single tank.

One industry expert last night said the £12,000-a-year bill for heating, cleaning and lighting the tanks would be just a fraction of the £80,000 it would cost to maintain one huge tank.

Each aquarium will require a filtration system to ensure the water stays clean and fresh. Experts say there are 2,000 species of marine life suitable for the tanks, ranging from smaller breeds of shark to clown fish, yellow tangs, blue tangs and angel fish. It has been suggested that the celebrity obsession with aquariums has nothing to do with a fondness for fish.

One tank designer, who asked not to be named, said: ‘Our client list tends to be male-dominated and they are looking for status symbols and showpieces.’

The 34-year-old returned to the US this week following a short loan spell back at Arsenal during the American league’s mid-season winter break.

But the star, who divorced his wife Claire Merry in 2007 and is now dating Bosnian model Andrea Rajacic, is keen to maintain his London base, in Hampstead, to be close to his daughter Tea.

Henry’s new home will be taller than the existing one and include a bar, a cinema and a swimming pool. Despite spending at least £2 million on rebuild costs, the finished house is likely to be worth at least £10 million.

The footballer is keen to highlight the eco-features of the new home, which includes extensive glass panelling to capture natural light and a so-called ‘biodiverse’ roof, which will incorporate plants and trees.

But the house’s original architect and founder of MJP Architects, Sir Richard MacCormac, is opposed to the proposed demolition.

Sir Richard, who also designed the Welcome wing of the Science Museum, said last night: ‘I don’t think you improve sustainability by demolishing a house which is just 13 years old.

‘It surprises me that someone who can afford to build a new house and who claims to be serious about architecture should not simply build another one elsewhere.

‘I think my original design is well regarded locally and I think a lot of people are going to be upset. The existing house has a very deliberate low-key design to ensure that it would not look out of place in the conservation area.’

There is also opposition from The Twentieth Century Society, which champions modern architecture and is considering applying for the building to be listed to block the demolition plan.

The society’s director Catherine Croft said: ‘There are so few fabulously well designed modern homes like this that we shouldn’t be knocking them down.’

Camden Council said the application would be debated by councillors in March.

UPDATE: Turns out Thierry scrapped plans for the giant Fish tank / Home Aquarium after all, as the Daily Mail reports.