` New Contemporary Last Supper Art - If It's Hip, It's Here
Skip to content 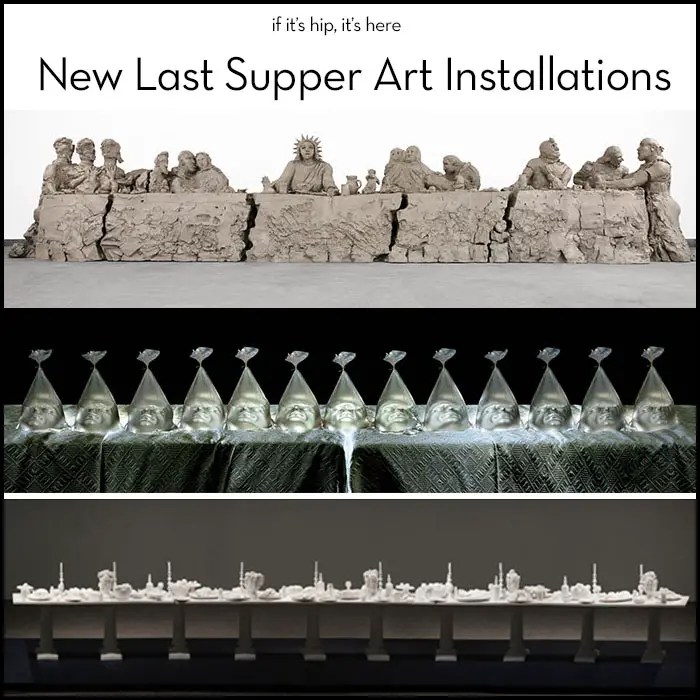 One of the many amazing things about art is that the same subject can be depicted by hundreds of thousands of artists over the course of centuries and yet each time it appears differently and ellicts different feelings and emotion from the viewer. Few, if any, pieces of art have been reimagined as many times as Leonardo da Vinci’s Last Supper. And the beautiful interpretations just keep coming.

If you think you’ve seen all The Last Supper art worth seeing, think again. These seven impressive pieces and installations have all been created within the past few years and have yet to make it to many people’s lists or collections, such as our impressive Pinterest board featuring over 400 versions.

By now you’re all familiar the original and probably the most oft-referenced “modern” versions by artists Andy Warhol and Damien Hirst. Many a blog, including this one, have brought you the “pop culture” or cartoon meme versions of the famous religious painting.

But these aren’t memes or playful narratives. These are serious pieces of Last Supper art by well-respected artists from all over the world. And each has been created within the past decade. 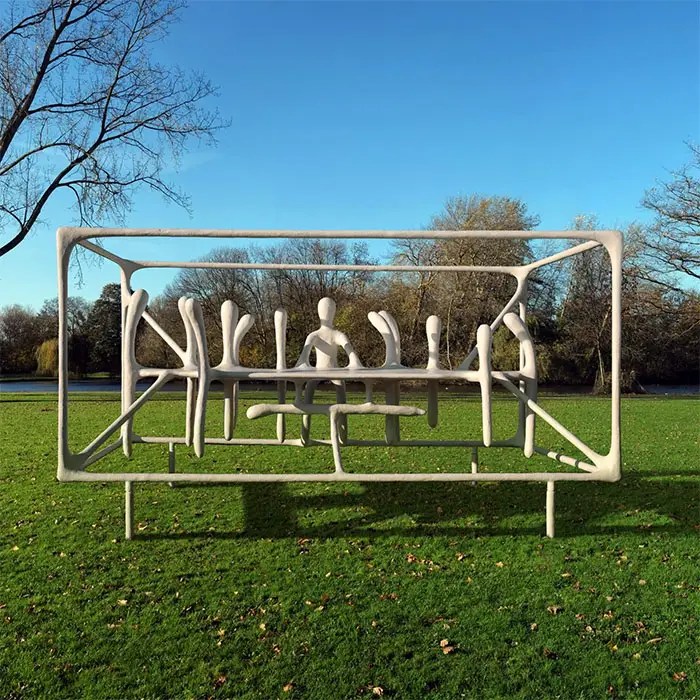 “The last supper has been an important artistic subject for two millennia, from the second century catacombs of Rome, via Michelangelo and Da Vinci to Nitsch and Warhol. Its symbolic meaning is universally understood: a goodbye to life and the world as we know it. In AVL’s version every apostle has its own character: lethargically hanging in a corner, sneaking away or hiding under the table. The scene is framed by a cage-like structure that ties it together like a portable shrine, but also implies restriction, either physically or mentally.” – Atelier Van Lieshout 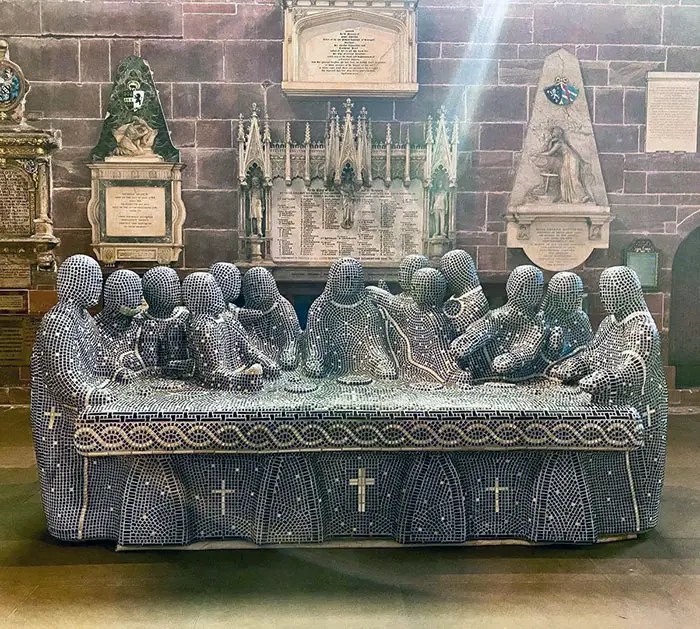 Placed in the UK’s Chester County church, The Last Supper sculpture by Peter Barnes is a mosaic depiction of Jesus and his twelve disciples made of black and white computer keys. The sculpture began with a clay base way back in 2010. Six years later, using classic English Windows keyboard keys in black and white, Barnes began the mosaic process which took four years to complete. The piece was then installed in the Chester Cathedral in 2020. 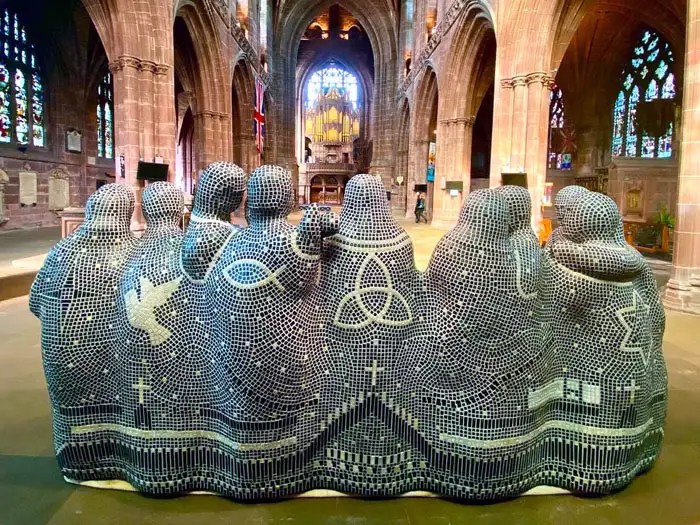 Influenced by major artists such as Lucian Freud and Francis Bacon, Philippe Pasqua’s monumental sculpture entitled The Last Supper was presented in his first solo show in Spain in 2017.

In his bronze version of Da Vinci’s ‘The Last Supper’ Jesus and the twelve apostles are depicted as grotesque primates wearing clown noses and grins. The chimp-like hands and hairy arms clearly address Creationism versus Evolution and contradicts the values set by the original painting.

Not unlike the Planet of The Apes series, these primates appear to have evolved a human consciousness and their table is littered with human skulls as if they have dominated mankind.

“When I was creating it I wondered where these characters came from, is the celebration they have for something they have already done or for what they are going to do in the future? Who are they?”- Philippe Pasqua Commissioned by Hazelhurst Regional Gallery and curated by Carrie Kibbler, the nine meter long banquet table is sculpted entirely from more than one ton of Murray River salt. The piece is a statement on the concerns arising from increasing salinity levels in Australia and unsustainable agricultural practices. Historically, salt has significant cultural and religious properties. The title of the work, The Last Supper, also references the idea of a last supper on the eve before death – a feast before entering the afterlife – and immediately brings to mind Leonardo Da Vinci’s masterpiece, The Last Supper (1494–1498), which depicts Christ and the twelve disciples sharing a last meal before the crucifixion. However, the relationship between Da Vinci’s work and the Yonetani’s is drawn even closer when considering the significance of salt to both works. In Da Vinci’s The Last Supper close inspection of the work shows Judas Iscariot knocking over the salt cellar and spilling it onto the table. Salt is often considered to be a symbol of trust and friendship because of its lasting quality and the spilling of salt was thought to be an omen associated with treachery and lies. The single large-scale sculpture is the artist’s take on the classical religious theme, cast in bronze from the original unfired clay composition. The piece debuted as a central element to the YES exhibition at Gagosian New York in 2014. 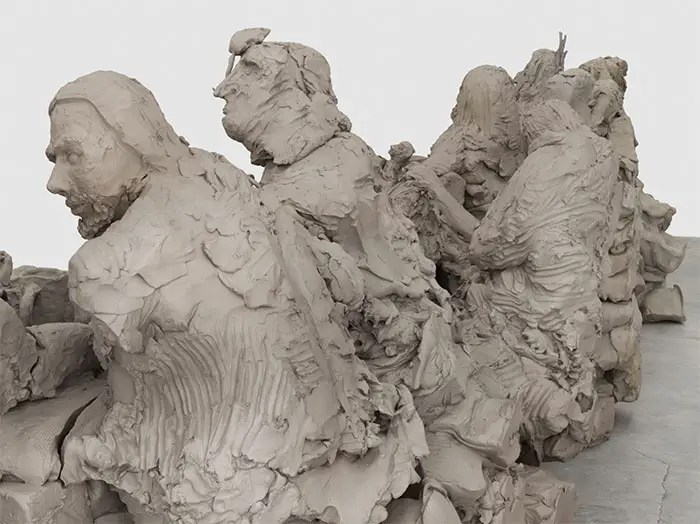 A part of the permanent collection at Moscow’s Erata Museum of Art is a Last Supper installation by Russian Postwar & Contemporary artist Pavel Grishin.

It’s a tribute to famous mural painting of Leonardo da Vinci. This installation has a few levels of interpretation. On the first level we have literal illustration of the title. You see, in Russia we call this biblical event “The secret evening.” So you can also say something that is hidden from a viewer. Here as you can see I literally hid the whole scene under the fabric. So you can’t be sure what personalities are represented here or even if there is something under the surface.

That meaning brings us closer to the second level of understanding. Did this event occur in human history indeed? Since we don’t actually have any strong evidence that Jesus Christ was a real person. Here we have that fine line between “believers” and “non believers”.

Furthermore, the third level of interpretation is anticlerical in a sense. It’s a critic of the whole Institution of church, founded by twelve apostles. As that institution distorted the initial knowledge that Jesus gave to humans if he really did. Or at least they misunderstood him. Remember all those terrible things that church has done in the name of Jesus Christ. I think, no one who’s familiar with his initial ideas would deny that. – Pavel Grishin, artist This piece was created for Glasstress-2011, an exhibition put on by the Berengo Centre for Contemporary Art and Glass at the 54th international art exhibition / la Biennale di Venezia 2011. Look closely, crystal cast faces can be seen in each of the bags.

Prior to this piece, Konstantin Khudyakov, an architect and industrial designer, was one of the first artists to use digital media. His computer-created Last Supper in 2007 was a precursor to the above piece.

The above print sold for £46,850 at a Phillips auction.
images and information courtesy of Fondazione Berengo and Phillips

It was hard for me to narrow it down to only these 7! See many others (400+) on our Last Supper Pinterest Board here.

We hope we brought you some new and interesting art to ponder this year!