` Anna Psalmond Helps Injured Animals of Costa Rica by Shooting Them. - If It's Hip, It's Here
Skip to content 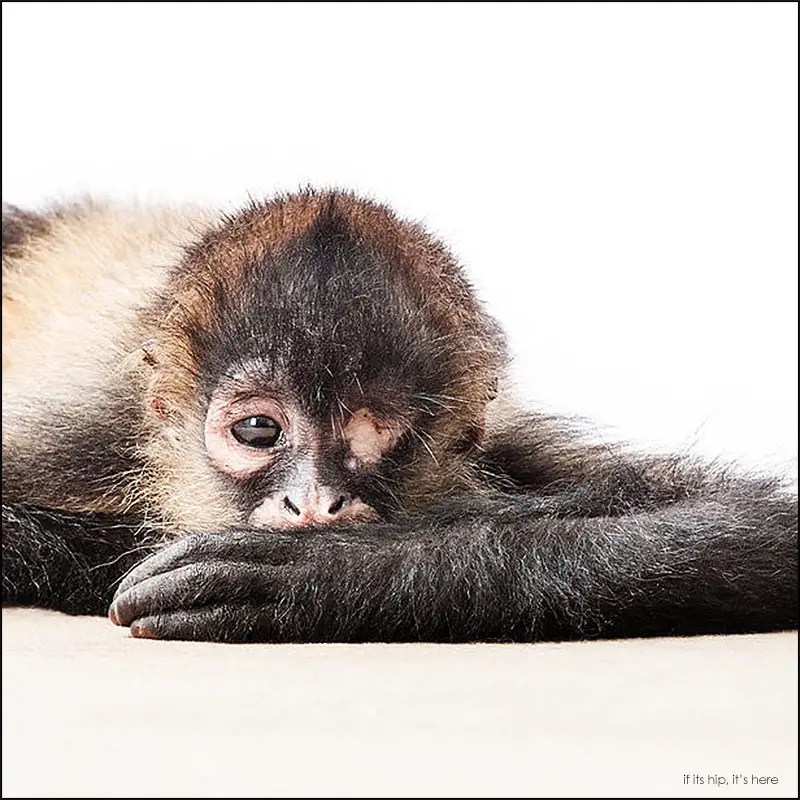 Anna Psalmond (now Anna Munanadar) is doing something to help injured, mistreated and abandoned animals of Costa Rica. She’s shooting them. When I say shooting, I mean photographing.

Photos of Rescued Animals for The Jaguar Rescue Center

Los Angeles-based animal photographer Anna Psalmond’s photos of rescue animals for The Jaguar Rescue Center in Costa Rica is her effort to do something with her talents that benefits animals and humans alike.

Her sweet images of abandoned, injured and mistreated birds, monkeys, sloths and other Costa Rican wildlife are turned into postcards whose proceeds go to rehabilitating and then re-introducing these animals into the wild when they are healthy and ready. That’s the benefit to these adorable creatures. The benefit to you is a collection of nicely produced postcards featuring her fabulous photography. How can you go wrong?

Meet the Rescue Animals, all residents of the Jaguar Rescue Center and each beautifully photographed by Anna. A green parrot who was raised in a shoe box, Lola had trouble flying and walking as a result of being kept in the small box. Despite her horrible past, she was always laughing, singing, and talking constantly. Formerly a resident of Jaguar Rescue Center in Costa Rica, she had a conflict with another bird and flew away to the jungle. Volunteers have not been able to find her to this date and they miss her dearly. A baby three-toed Sloth. Despite their same name, the three-toed sloths are very different from two-toed sloths, both externally and internally. Their hair, nose, toes, ribs, sexual organs are different. A large number of sloths died or injured on daily basis in Central America due to the poor coating of power lines and attacks by dogs. A rescued two-toed Sloth baby who recently lost his cuddle buddy and has been in mourning ever since. The scar left from losing a mom and a best friend definitely will take a lot of time to heal. 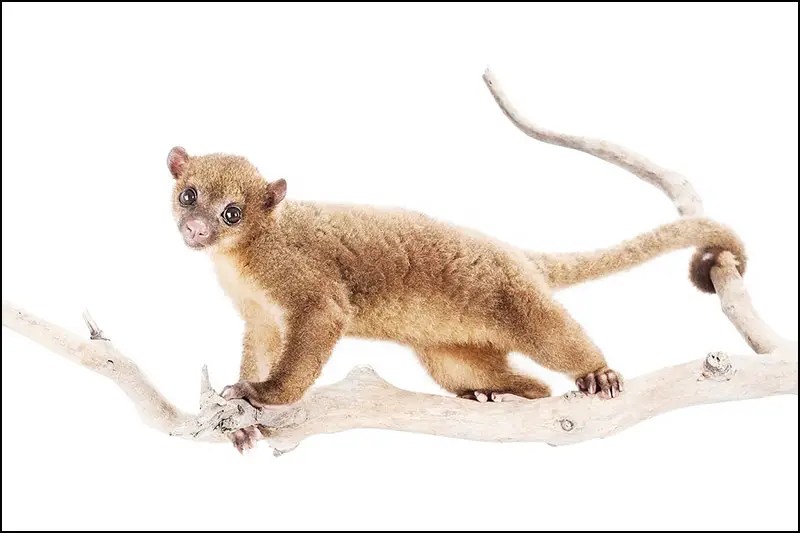 Stanley is a partially blind Kinkajou, also known as a Night Monkey. A baby Spider Monkey who lost his eye when a group of locals hunted his mom for food. He lost his mom, but is now being loved by many people at the Jaguar Rescue Center. He is normally shy around female humans but very talkative around males. An energetic baby spider monkey, Nerea is a female. A Spider monkey’s clitoris is large and is called pendolous clitoris as it dangles externally. Nerea is a trouble-maker; frequently destroying stuff and teasing her care-takers at work. Nerea was photographed during work-out to prepare for her next plot. An injured Paca, also known as a Tepezcuintle, who was hunted for food by locals. They are the second biggest rodents in Central America, a delicacy for locals and therefore frequently hunted. 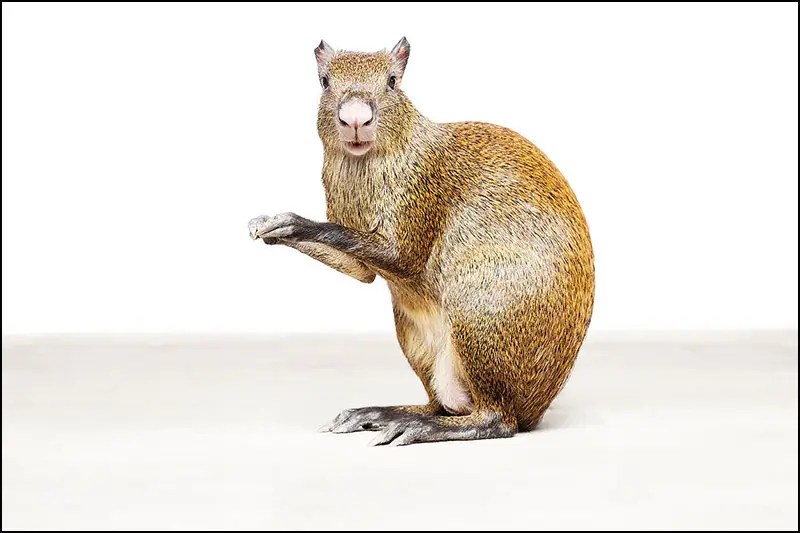 Agouti are the third largest rodent in Central America. They are as big as medium-sized cats, mostly shy and very fast. They are hunted by locals for food, although not as much as the Paca. 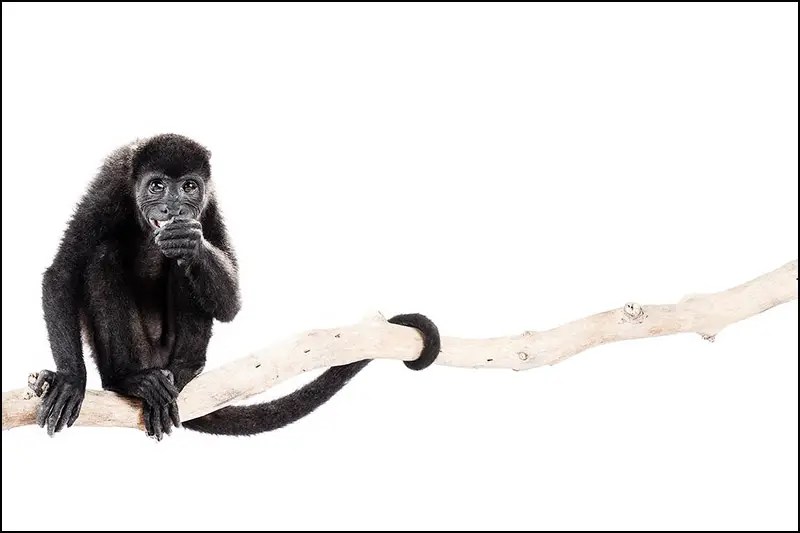 Angelina is a teenage female Howler Monkey. Howler Monkeys are the loudest animal in the animal kingdom. Their howl can travel 3 miles through dense forest and Anna claims it is one of the most majestic sounds she has ever heard. These Mother and son Howler Monkeys are both residents of Jaguar Rescue Center, Costa Rica. 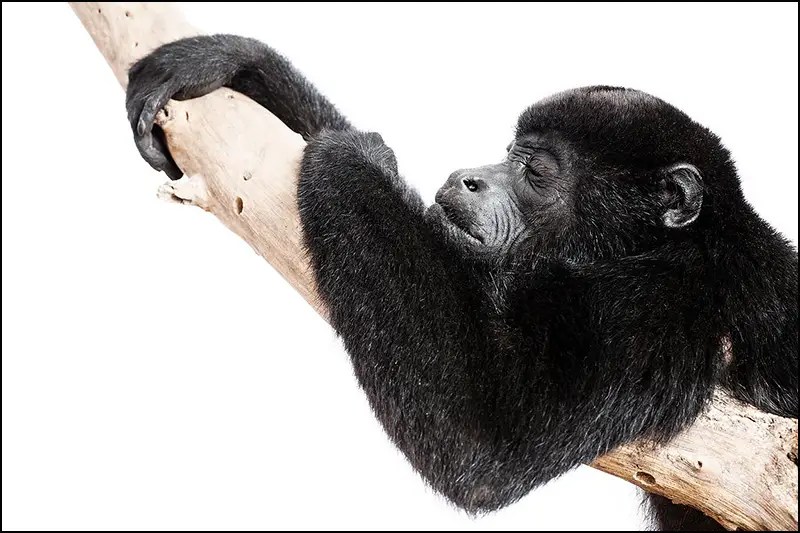 A teenager, Cheppito is the biggest Howler Monkey at the Jaguar Rescue Center. He is also the sweetest. He likes to be held and cuddled by humans. He recently lost his toes during a fight to protect his troop and care-taker from a wild howler monkey. Such a big hero.

Her photos were turned into signs for the Jaguar Rescue Center, as you can see below (photos courtesy of JRC volunteer Marloes van den Bergh): 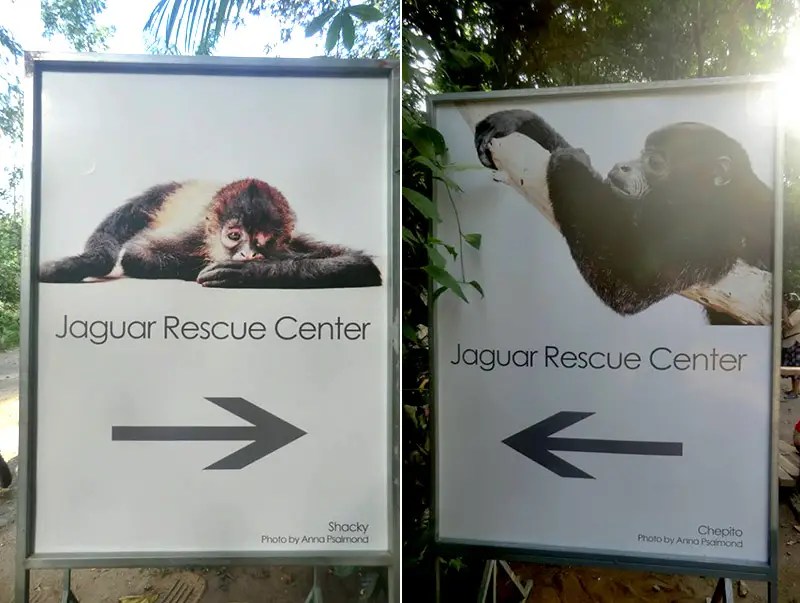 Meet some of the volunteers at the Jaguar Rescue Center (photographed by Anna).
Marloes van den Bergh and Lina: 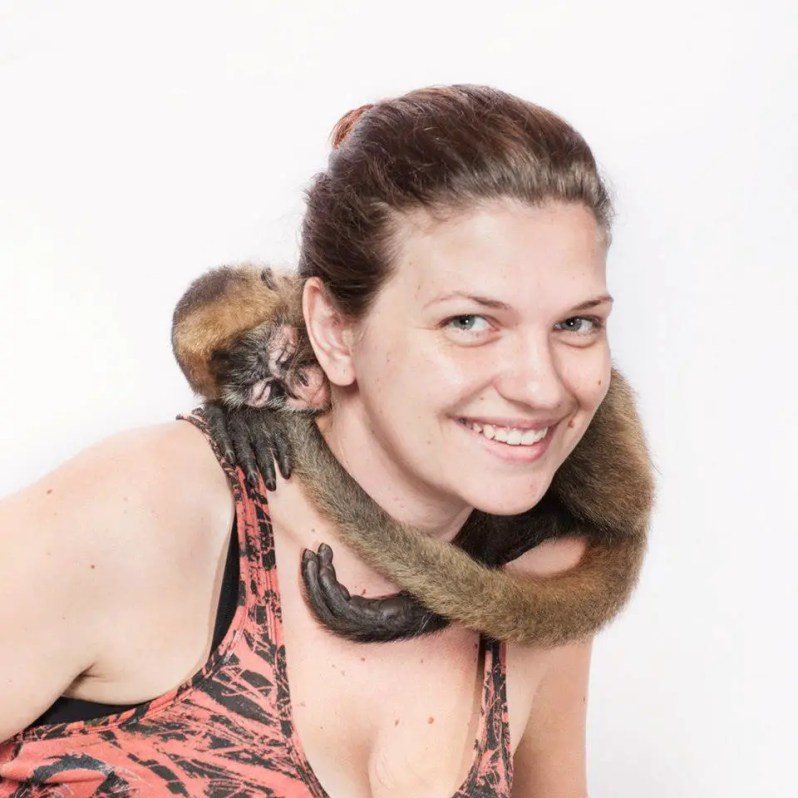 The Jaguar Rescue Center in Costa Rica treats and rehabilitates injured and abandoned animals of Costa Rica. Through a lengthy re-introducing process, they also release animals to the wild when they are ready. Profits from this postcard sale will go directly to help the animals: Lola the parrot, Stanley the kinkajou, Shacky the baby howler monkey, Fernando the 3-toed sloth, Stanley the 2-toed sloth, and their friends. 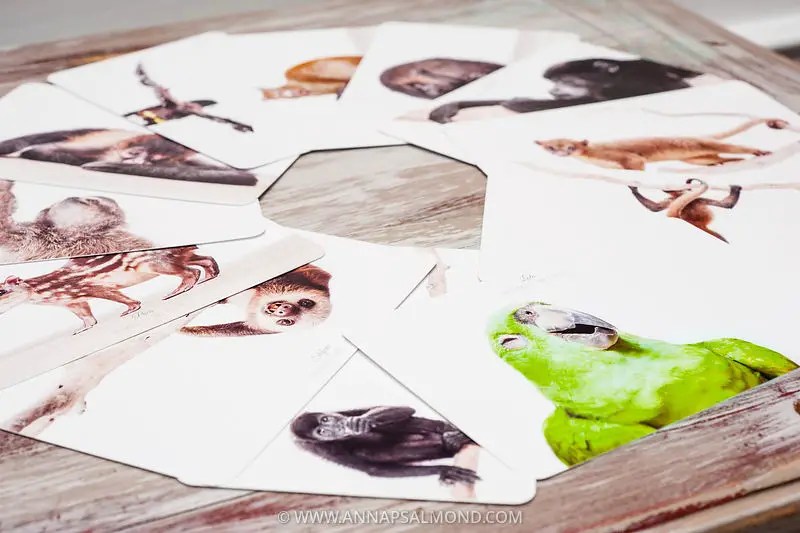 About:
Anna Psalmond (now Anna Munandar) is an animal photographer based in Los Angeles, California who is passionate about love, animals, and travel. She was trained as a commercial photographer at Art Center College of Design in Pasadena, California. Her work has been published in magazines around the world and displayed in billboards around Los Angeles. She is active in helping non-profit animal rescue organizations around the world. above: Anna and Cheppito goof around at the Jaguar Rescue Center

Anna was born in Indonesia, but considers herself a citizen of the world. She is currently living her life-long dream of traveling the world with her husband and photographing animals of the world. Since about 8 years old, she has always wanted to experience the world and different cultures. She often wonders how different life would be if she were Japanese, British, or American; how different cultures would shape one’s personality. Now, two decades later, she is on a journey to find out the answer to those questions.

Cultures are not her only interest since young age. Despite her allergy to fur, she has always loved to be around animals since very little. She was always sneezing and having difficulty breathing, but to her, it’s a small price to pay for happiness.

Her goal in photography is the same as her goal in life: happiness. She takes pictures to make her happy, to make you happy, and to share the story, emotions, love, and happiness to the rest of the world. She is always the happiest when she is around animals. To her, they are pure and majestic beings with untold stories. If only we could communicate with them fully.

all information and images courtesy of Anna Munundar