` Wutopia Lab Shrine of Everyman - If It's Hip, It's Here
Skip to content We found Heaven and it’s a rest shelter in China that Augustus Gloop would die for!
Okay, that’s a lot to absorb, so let’s put it another way. Shrine of Everyman is an unusual, ethereal-looking structure that started out as an abandoned pump house. Wutopia Lab transformed the old brick building into a rest stop overlooking the river at Shanghai’s Dongtanyuan’s Qian Shao Farm, which is owned by multinational food and beverage Bright Food Group. The inspiration for the striking 35 square meter shelter was Chocolate and its role in China’s history. Read on for more. 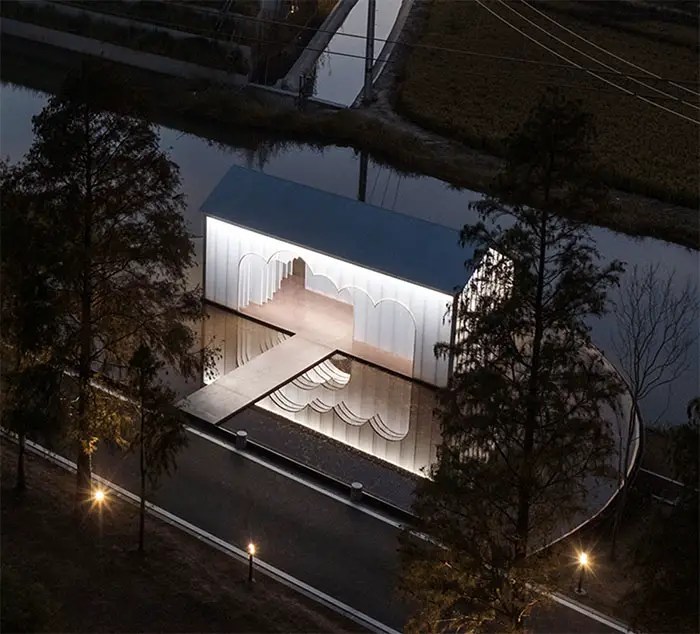 An architecture finalist in the commercial category at this years A+ Awards, Shrine of Everyman was originally a neglected industrial pump house set in an idyllic area, facing the river in the Chongming district of Shanghai, China. The client, Bright Food Group, wanted a rest stop for visitors and passers-by that would connect with the users, both local and out of the area. The special space which looks almost reverential has a nod to Chinese architecture that was inspired by… chocolate!

In Chinese culture it’s not unusual to turn an everyday place into a sacred space through shared memories. So what does the memory of chocolate have to do with this pretty shelter? Apparently during a time of material scarcity, Milk Chocolate was reinvented by the predecessor to the Bright Food Group, was a boon to the Chinese people of that period, and has since become an integral part of Shanghai’s culinary memory. The architect states “I decided to use milk chocolate as the theme of the pump room to awaken the memories of ordinary people who were temporarily forgotten because of the great material abundance, while still enjoying life, thus turning an abandoned facility into a sacred space for ordinary people.” Suspended above the river’s edge the new structure sits atop a brown semi-circular reflecting pool meant to look like liquid chocolate. 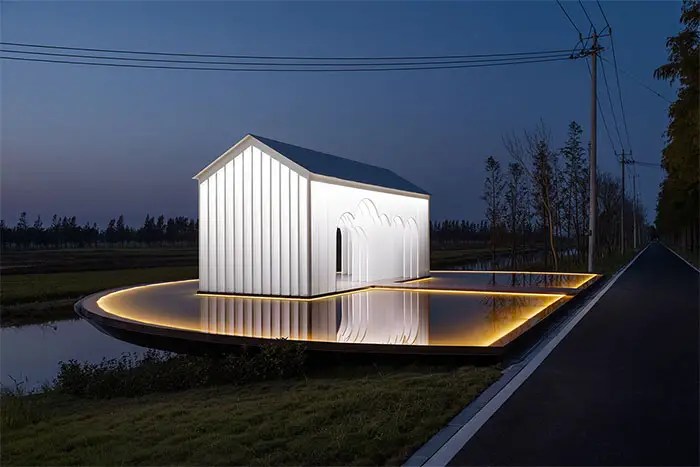 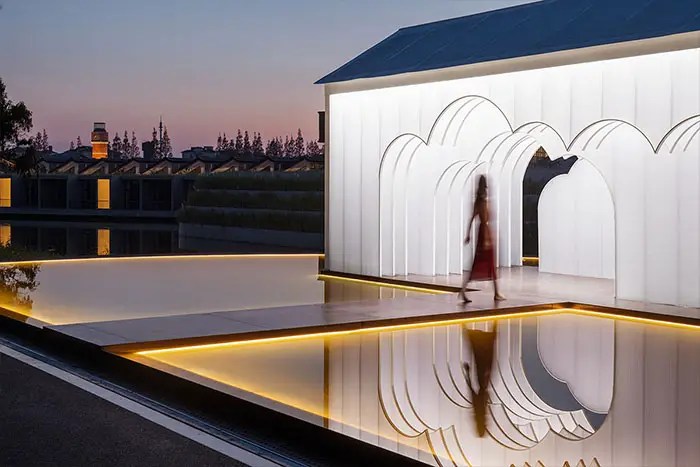 Upon it stands 13 overlapping layers of translucent polycarbonate panels symbolizing milk, in a Cloud motif, common in Chinese culture (and according to the architect, a favorite of his daughter). 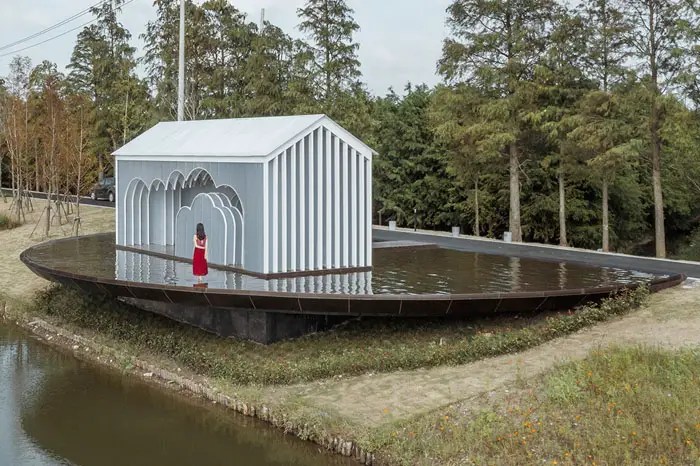 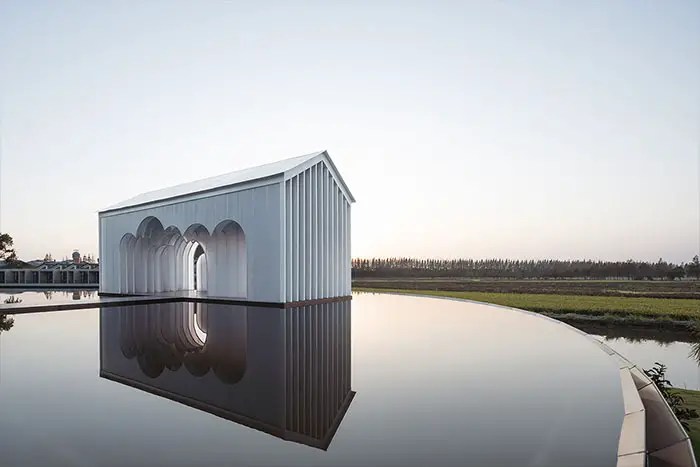 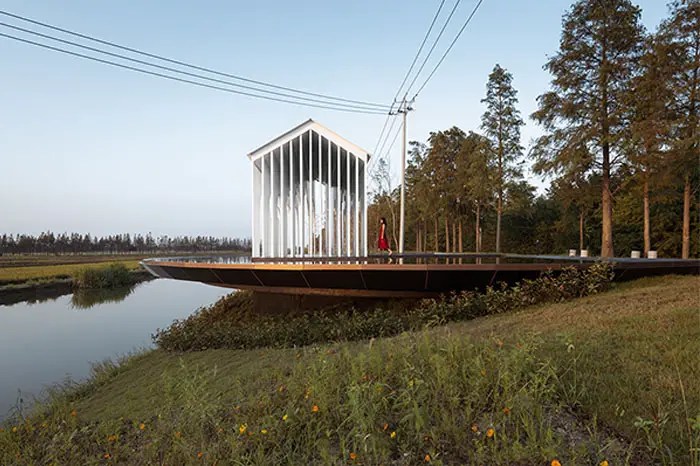 Jagged doorways and overlapping silhouettes bring depth and space to Shrine of Everyman providing a sanctuary of sorts to provoke conversation or introspection. 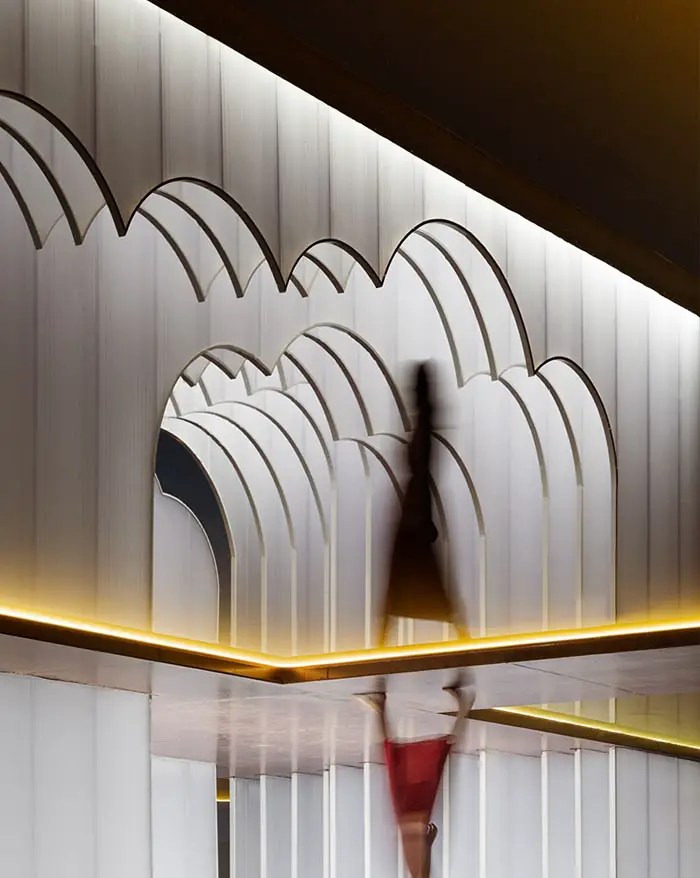 “There is something you need to hear …”— Robert Macfarlane 《Underland》 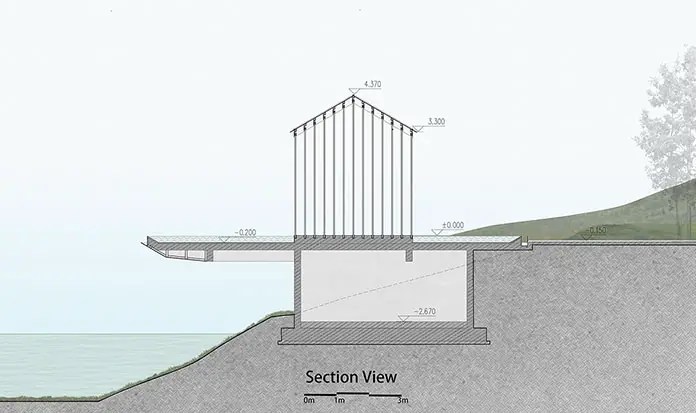 The base of the pump house is cantilevered from the rectangular semi-basement to a maximum distance of 4.6 m. The structural engineers used beam overhangs near the basement and thin slab overhangs up to 2.5 m from the pool. This allows the new pump house to be visually prominent in the surrounding landscape by achieving a floating effect, both from the perspective of the road and from the water surface. The new pump house in the center of the pond is realized by a horizontal 9.6m span with a minimum structural scale of 85mm steel beams and 60mm steel columns. The Shrine of Everyman was created through the connection of thin steel-sheet-roof, framed by light and translucent polycarbonate “cloud-doors”. It is the translucent uncertainty and the pools that isolate the landscape that create the sacredness of the place. And it was reinforced by the experience of walking through the straight path into the pump room. You walk into Shrine of Everyman as if you are walking into a shrine shaped by the shared memories of ordinary people. Inside, you can look into the distance and see a beautiful earthly landscape that was reclaimed by countless ordinary people. You know that everyday miracles are actually done by ordinary people. “You are absolutely completely in void, like being in outer space… You get to the point where there is no God, no past, no future, just now and the next millisecond.” — Robert Macfarlane 《Underland》

images and information courtesy of Architizer and Wutopia Lab

Like a Tree House For Jesus, A Chapel On Stilts.

Forget Man Caves and She Sheds, I Want a Wine Cave!