This incredible home in British Columbia spans over 8,000 square feet (including the guest house) and has a 25 meter pool that juts out over the rocky outcrop, seemingly suspended above Whistler valley.

The Whistler Residence With Cantilevered Pool

Designed by architects Bohlin Cywinski Jackson, the Whistler Residence with cantilevered pool is located atop a 640-foot rocky outcrop high above Alta Lake in Whistler. The modern private home is nested in the shape and contours of the landscape. 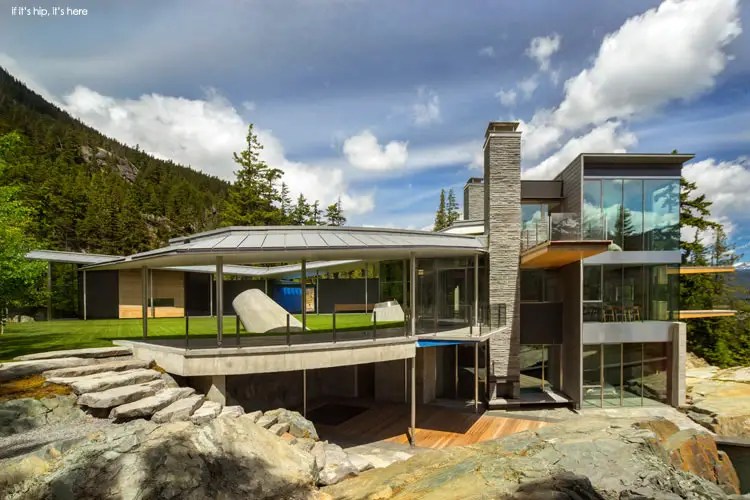 the following text is courtesy of the architect
A small spike of the building perched high on a rock ledge overlooks the steeply ascending mountainous drive to the property. At the road’s peak, a narrow drive is carved through solid rock to arrive at a court flanked by rugged stone and a sleek metal wall. Here a shimmering blue, glass passageway opens to a verdant courtyard that serves as an oasis for outdoor gatherings and children’s play. 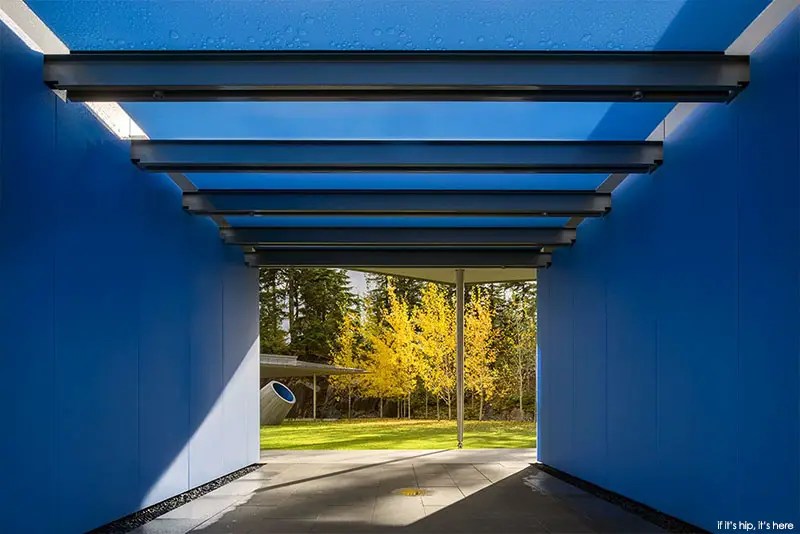 It is rimmed on one side by a grove of aspen. Concrete cones mark key spaces beneath as they reach to the sky for light. 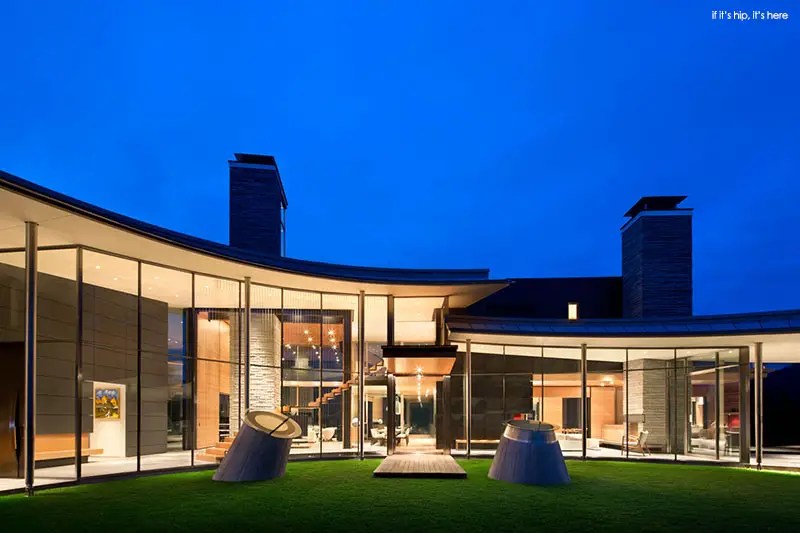 Geothermal wells are buried in the earth as the surrounding building reaches out over the edge of the site. An arced blade of roof supported by slender stainless steel columns encircles the remaining courtyard as the crystalline building occupies the threshold between the manicured court and pristine wilderness. 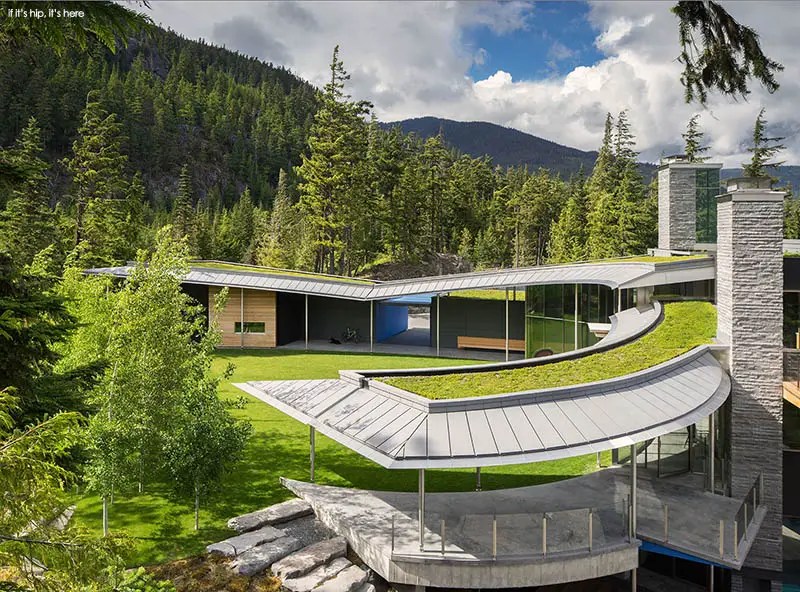 A heavy bronze door marks the entry to the house where the peaks of the Whistler and Blackcomb Mountains are first seen. The building, composed of several volumes radiating from the lawn, is informed by a Fibonacci sequence that manifests itself as a golden spiral in the landscape. The three-story boxes are lined with reclaimed wind fall Douglas fir and have large expanses of glass, each revealing a distinct view: the Whistler Valley and resort as well as the Coast Mountains of British Columbia. Terraces and cantilevered porches visually extend spaces into the landscape. 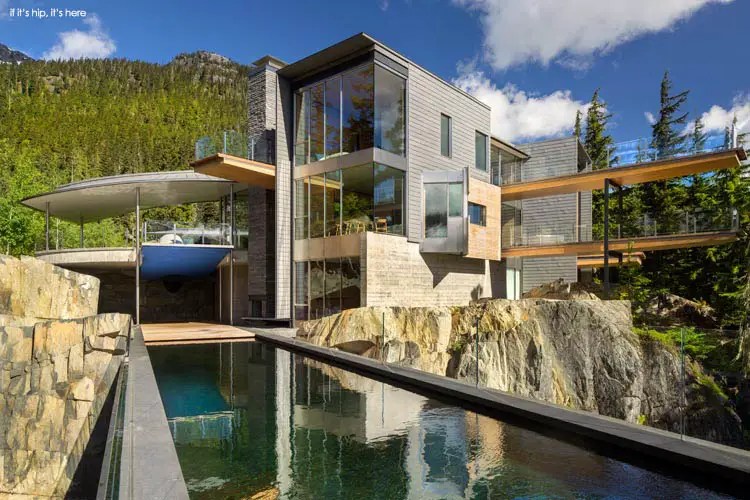 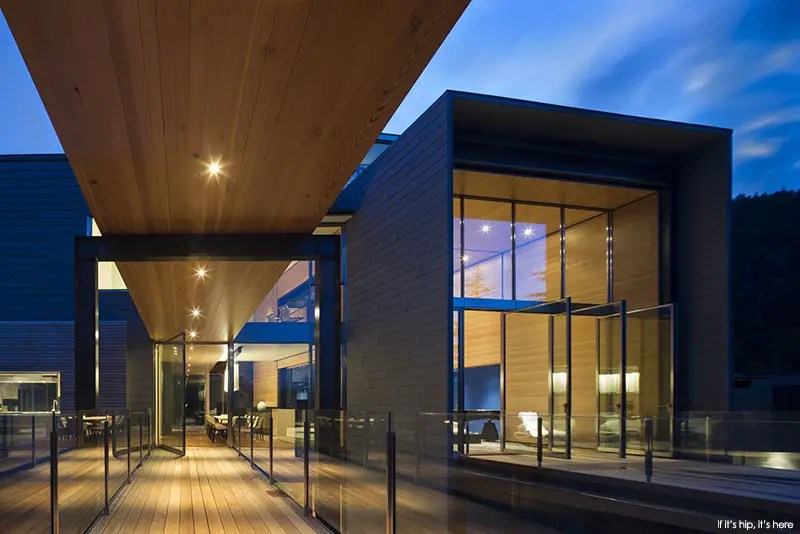 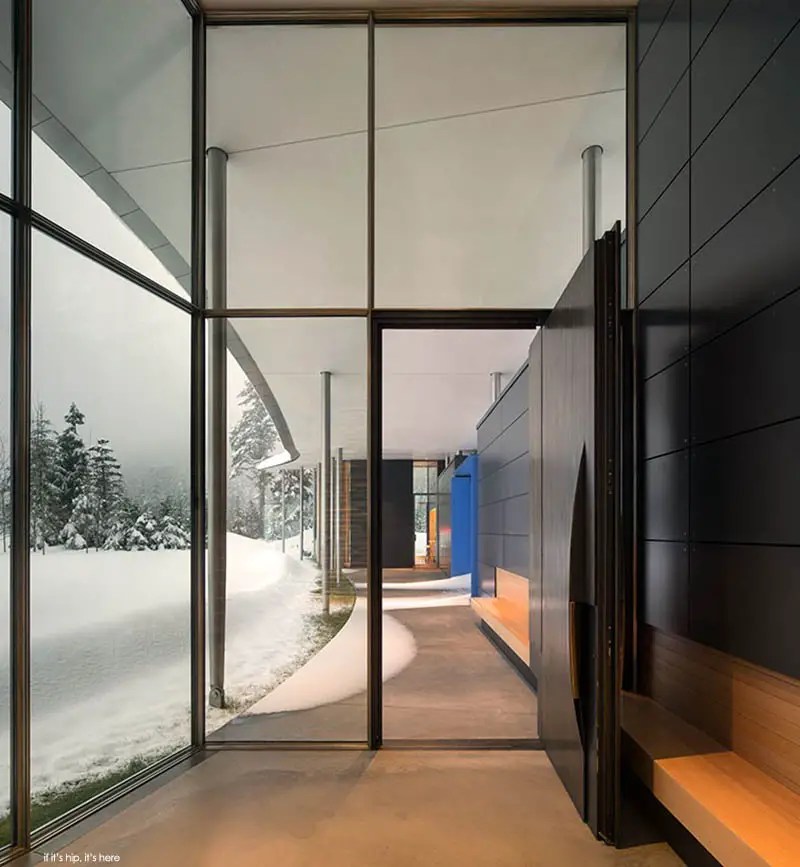 Nestled into a grotto, a spa anchors the 25-meter pool, which slices through and cantilevers over the edge of a rocky precipice intently reaching to the distant horizon. 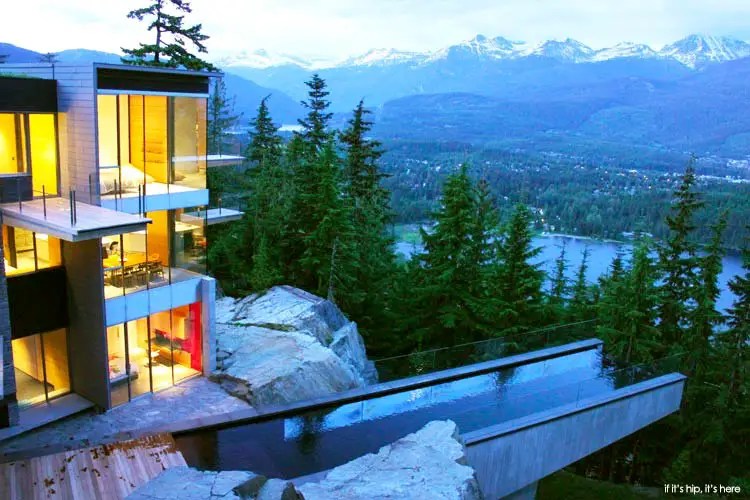 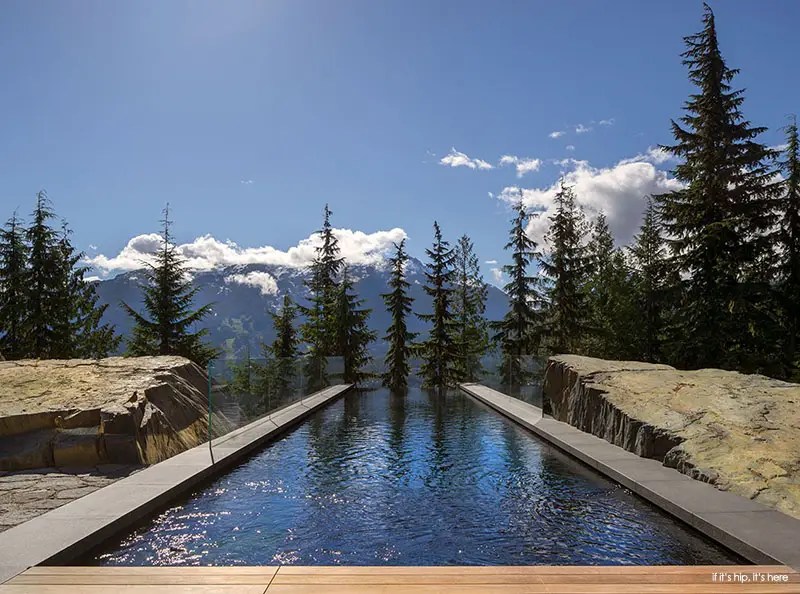 The building evolved into an inevitable form on this site inspired by the owners’ desire for a seamless connection to the natural world. The construction is detailed to assimilate the outcroppings and crevices of the rocky terrain and in turn revere them. 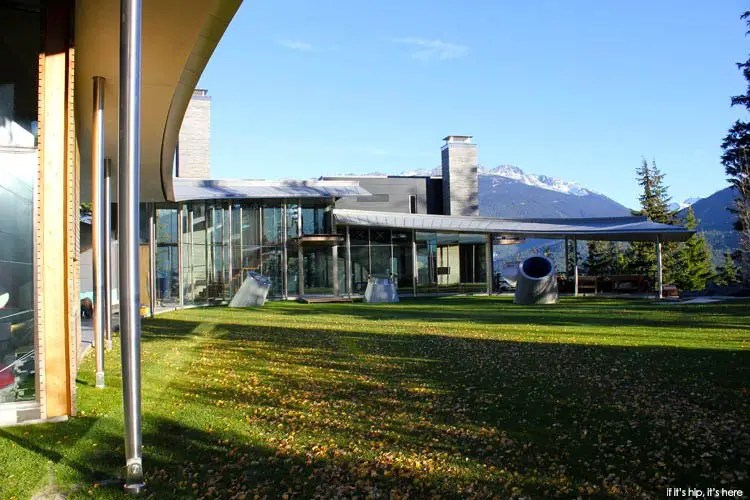 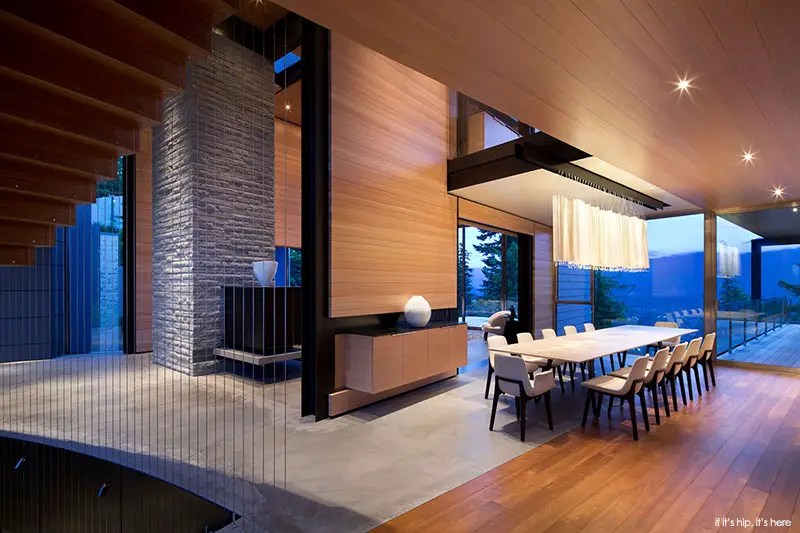 The cylindrical cones that sprout from the ground on the exterior of the home bring light indoors, as you can see from the images of the wine cellar below: 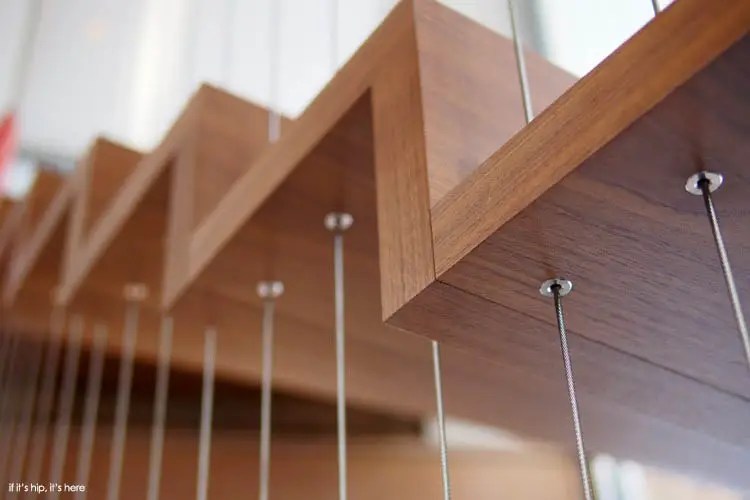 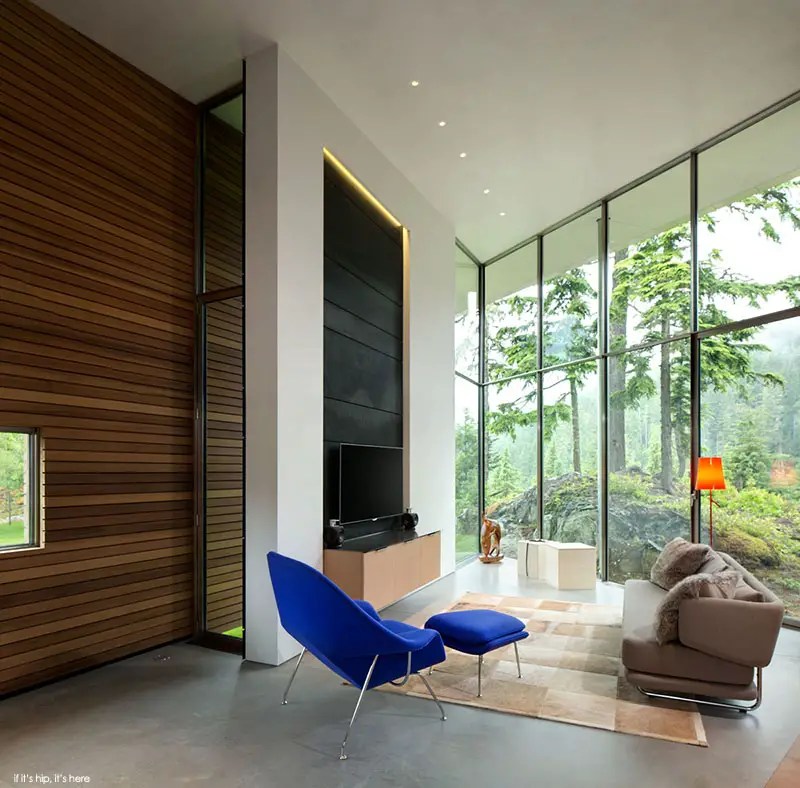 all photos courtesy of Nic Lehoux and BCJ

Tut tut! Someone Got To Stay At Pooh’s House and It Wasn’t Me!

So That’s What Diamonds Smell Like. Your Popup Paris Candle May Have A Real One In It.