` The Statue Of Liberty History In Pictures - If It's Hip, It's Here
Skip to content A gift from France to celebrate our country’s independence, she has has stood over New York Harbor since Oct. 28, 1886. That makes Lady Liberty 130 years old as of yesterday.

Statue Of Liberty History In Pictures

The Concept
The idea for the Statue of Liberty first came from Edouard de Laboulaye, a French political intellectual and authority on the U.S. Constitution. In 1865 he proposed that France give a statue representing liberty to the United States for its centennial. The recent Union victory in the American Civil War reaffirms the United States’ ideals of freedom and democracy, serving as a platform for Laboulaye to argue that honoring the United States would strengthen the cause for democracy in France.

The Artists
The Statue of Liberty – which also served as a lighthouse from 1886-1901 – was designed by Frederic-Auguste Bartholdim, a sculptor interested in colossal works.

French engineer Alexandre Gustave Eiffel, the man behind the Eiffel Tower in Paris, was responsible for the statue’s internal structure, around which was wrapped the sculpted copper cladding.

Assembled in pieces due to financial constraints, the Statue of Liberty was constructed in Bartholdi’s Parisian warehouse workshop.

The torch-bearing arm was first displayed in Philadelphia at the Centennial Exposition in 1876: The head was exhibited at the Paris World’s Fair in 1878: The statue was completed in France in 1884, but money was still needed to complete the pedestal in New York. Eventually, a donations drive spearheaded by publisher Joseph Pulitzer attracted over 100,000 contributions and the pedestal was finished by April 1886.

Architect Richard Morris Hunt designed the Statue of Liberty’s granite pedestal in 1884, donating his fee to help fund the Statue.

The Statue was completed in France in July 1884 and arrived in New York Harbor in June 1885 onboard the French frigate “Isere.” In transit, the Statue was reduced to 350 individual pieces and packed in 214 crates. The Statue was reassembled on her new pedestal in four months’ time. 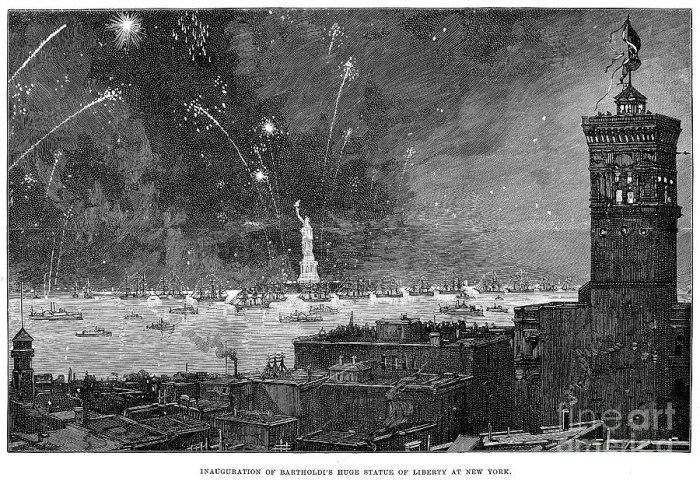 In October 1886, she was officially dedicated during a ceremony presided over by President Grover Cleveland. A fun bit of trivia: the day of the dedication was very foggy, so there are very few photos of the ceremony. It was so foggy and wet that the fireworks display was moved until November 1st due to the weather. At the time, the public could pay fifty cents to climb to the balcony of the torch.

This 1936 photo of President Franklin D. Roosevelt speaking at the 50th anniversary of the statue is often misrepresented as the 1886 dedication ceremony: Emma Lazarus, a native Jewish New Yorker, contributed one of the most well known pieces of art inspired by the Statue of Liberty and its optimistic message to the world’s disenfranchised people.

Her sonnet entitled “The New Colossus,” written in 1883 for an auction to raise funds for the pedestal, was a tribute to the symbolism of Lady Liberty: 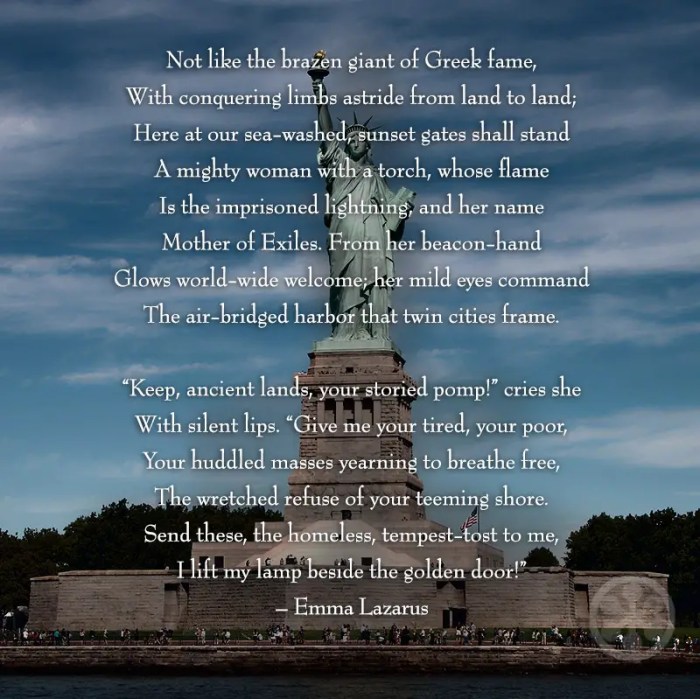 In 1903, the poem was inscribed on a plaque and mounted to the base of the Statue.

In 1984, renovations on the statue began. The work was carried out through a collaboration between the National Park Service and the Statue of Liberty – Ellis Island Foundation.

Workers repaired holes in the copper skin and removed layers of paint from the interior of the copper skin and internal iron structure. They replaced the rusting iron armature bars (which joined the copper skin to the Statue’s internal skeleton) with stainless steel bars. The flame and upper portion of the torch had been severely damaged by water and was replaced with an exact replica of Bartholdi’s original torch, which was gilded with thin layers of 24k gold according to Bartholdi’s original plans. On July 5, 1986, the newly restored Statue reopened to the public during Liberty Weekend, which celebrated her centennial.

On August 3rd, 2004, the inside of the pedestal reopens to the public after having been closed since September 11, 2001, following work undertaken by The Statue of Liberty-Ellis Island Foundation and the National Park Service.

On her 125th anniversary in 2011, the statue was given a new name, “Liberty Enlightening the World Wide Web” thanks to a series of web cams placed around her torch.

Cameras now provide unobstructed panoramas and live views of the famed New York City skyline, along with a front row seat to watch views of the majestic Hudson River and ships in New York Harbor. Two other cameras point back at the Statue. One provides a ultra wide-angle interactive view of the famed golden torch and the other camera looks downward at the crown, tablet and feet.

In 2013, Architects Mills & Schnoering renovated the Lady once again. Enhancements included new interior and exterior stairs and new elevators, which made it easier for visitors to ascend to the pedestal’s observation level, which was made wheelchair accessible for the first time. From the top level of the pedestal, visitors were able to view the double helix stairs leading to the Statue’s crown as well as the support system originally designed by Gustave Eiffel.

In the 20th century, the statue acted as a beacon of hope and emblem of welcome to the many immigrants who passed through nearby Ellis Island, while serving as a patriotic icon while the United States’ fought World Wars I and II. But, even as its meaning evolved, the Statue of Liberty would continue to represent freedom in the United States—and, as TIME summed it up in 2009, become “a fixture of New York City and a symbol for the nation.”

As she stands today: UPDATE: In 2019, The Statue of Liberty Museum opened on Ellis Island. It’s absolutely beautiful. Learn more about it here