` Thumbtack Portraits of Black Icons - If It's Hip, It's Here
Skip to content 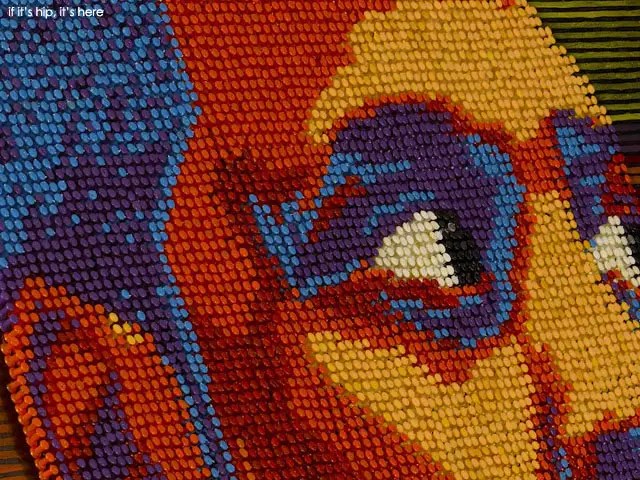 Andre Woolery’s work depicts his journey as an artist and reflects his personal cultural experience as a young black man. His current work, comprised of thousands of colored thumbtacks (not unlike Eric Daigh’s pushpin portraits) combined with paint, is primarily portraits of black icons by design.

Initially inspired by Fruit Loops, because of their bright colors, Andre considered using the children’s cereal as a medium. He then found a package of multicolored thumbtacks and began searching for them in all the colors he would need (apparently trying to find “orange” was like searching for the holy grail according to Andre).

Thanks to Mike Jacobs of Jam Paper, he ended up a wide array of colors (including orange) that made the following portraits of Jay-Z, Kanye West, Jimi Hendrix, President Obama and All About The Benjamins possible. Challenged to find a way of keeping the tacks in place on the canvas, he bought ALL of the hardware store’s expanding foam to spray the back of the canvas. The rest of the piece was tack-by-tack trial and error. Every ‘pixel’ was a lesson in spacing, light, and color to create the vision of Mr. Sean Carter (aka Jay-Z). “It’s All About the Benjamins” (featuring Benjamin Banneker)
23,850 thumbtacks in total
Price for the original: $ 25,000.00, 20% of proceeds from original piece go to Harlem Children’s Zone. All the artwork in this post (and more) is available for sale as originals or digital prints, some pieces whose partial proceeds go to the Harlem School of the Arts and the Harlem Children’s Zone, making them that much more attractive.

Andre’s thumbtack portraits only represent some of his artistic work. Check out his website to see more.