It’s hard to know whether or not to call Andrew Myers’ work paintings or sculpture. A bit of both, Artist Andrew Myers uses anywhere from 8,000 – 10,000 screws (which he then hand paints) drilled into boards to create thoughtful portraits of men and women. END_OF_DOCUMENT_TOKEN_TO_BE_REPLACED

Artist and huge F1 fan Nikki Douthwaite makes mosaic portraits out of photographs, paper scraps, articles and ephemera, but her Hole Punch Dot portraits really caught my eye. Most of us just toss out those little round pieces of paper punched out from larger pieces without giving them a second thought. What we think of us trash, Nikki has turned into an art medium. END_OF_DOCUMENT_TOKEN_TO_BE_REPLACED

Artist Joe Black’s Made In China was created using using more than 5,500 toy soldiers.The portrait is of a Chinese soldier boy taken by well-known photojournalist Robert Capa and appeared on the May, 1938 cover of LIFE magazine. The colored, molded plastic toy soldiers used in the project were manufactured in China, hence the title “Made in China”. END_OF_DOCUMENT_TOKEN_TO_BE_REPLACED

When Artist/Architect Hong Yi, who goes by the nickname “Red”, first moved to Shanghai she was fascinated by how many people still dried their clothes in the traditional manner of hanging them on bamboo poles in alleys, despite being in a sophisticated urban city. END_OF_DOCUMENT_TOKEN_TO_BE_REPLACED 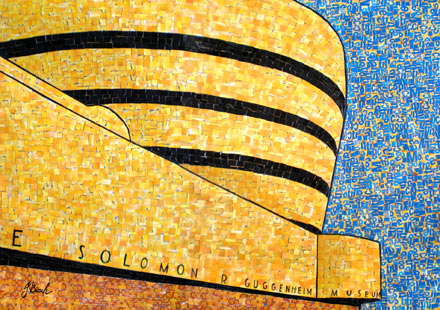 As the name suggests, these “Metro Card Collages” are made from cut up pieces of used and expired MetroCards® (MTA cards or New York City subway tickets). END_OF_DOCUMENT_TOKEN_TO_BE_REPLACED

Andre Woolery’s work depicts his journey as an artist and reflects his personal cultural experience as a young black man. His current work, comprised of thousands of colored thumbtacks (not unlike Eric Daigh’s pushpin portraits) combined with paint, is primarily portraits of black icons by design. END_OF_DOCUMENT_TOKEN_TO_BE_REPLACED

What began as a university fine arts project on Pointillism and Georges Seurat by student Joel Brochu, evolved into a remarkable artistic idea. END_OF_DOCUMENT_TOKEN_TO_BE_REPLACED

Get a load of Jason Mecier’s portraits of celebrities Amy Winehouse, Michael Jackson, Heath Ledger, Witney Houston, Courtney Love and Kelly Osbourne made with actual pills. While it’s true that some of these subject’s undoing was the medium itself, others, like Kelly Osbourne have successfully kicked the habit. Either way, these are interesting homages to them. END_OF_DOCUMENT_TOKEN_TO_BE_REPLACED