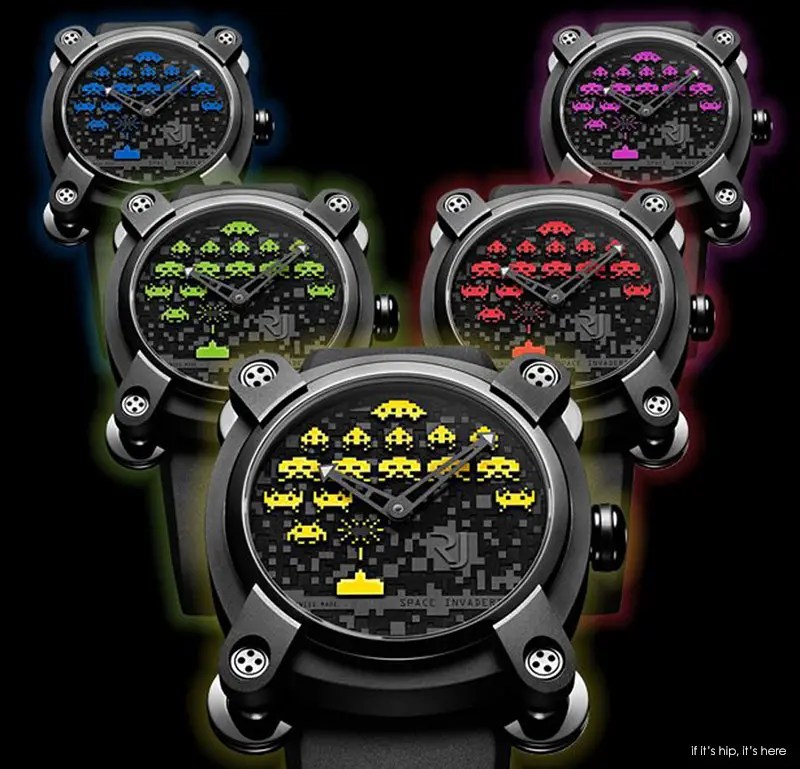 The watchmaker Romain Jerome is best known for his luxury watches that incorporate the DNA of legendary things and landmarks.

Inspired and paying tribute to historical events of the last century, each watch integrates the DNA of a legend such as the Titanic (made with rusted steel from the wreckage), The Moon (made with actual moondust), The Statue of Liberty (a bronze bezel which recalls the Statue of Liberty’s crown) and EYJAFJALLAJÖKULL (made with Volcanic ash and black lava rock). Each timepiece comes with a certificate of authenticity issued by a third party. As one would expect, these are very highly priced.

Now, he has collaborated with legendary video game maker, TAITO, to release his second round of limited edition SPACE INVADERS watches. Last year he introduced a white and multi-colored version (shown below). above: Romain Jerome’s first Space Invaders watches were available in multi-colored and an all white version coated with Superluminova so it glows in the dark

Now, the new SPACE INVADERS WATCHES come in four colors with a special blue one for Paris store Colette. The price is over $15,000 for the watch. Why? Read on.

Having inherited the highly distinctive case of the Moon Invader collection (a round shape inside a cambered 46 mm square), the SPACE INVADERS watches have kept the same steel coalesced with fragments of Apollo 11. The four functional ball-and-socket joints on the corners of the case are shaped like the legs of the lunar landing modules of the American lunar missions. These extremely sophisticated components mounted on axles anchored in the case hold the lugs of the rubber straps and enable the watch to adjust to all kinds of wrist sizes. Embodying another tangible token of the space age symbolised by the SPACE INVADERS collection, a dedicated plate made of Moon Silver RJ – a silver alloy with an extremely low oxidation rate incorporating moon rocks – appears on the stellar-patterned back of the watch and reproduces the lunar surface. The dial is very complex and consists of three layers: the first two are beadblasted and the “straight graining” gives a pixelated aspect to the third layer. Measuring around 3.5 mm each, the SPACE INVADERS are meticulously machined one by one, applied by hand and lacquered in various colours. These pixel invaders are a playful nod that transforms watches into inspired “talking pieces” capable of creating a distinct sense of affinity with those who wear them, and who revel in the chance to thumb their noses at classic watchmaking conventions.

The first release of the new collection is especially made for Colette, the über hip store and gallery in Paris. The pixelated figures (aliens) are the emblematic blue color of the store for a limited edition of eight pieces, only available in the trendy boutique. Buy it here

The SPACE INVADERS are available in four other colours (red, green, purple and yellow) and have started their incursion in all RJ-Romain Jerome points of sale worldwide. Limited editions of eight pieces per color, five new colorful legends have made their entrance at RJ-Romain Jerome.