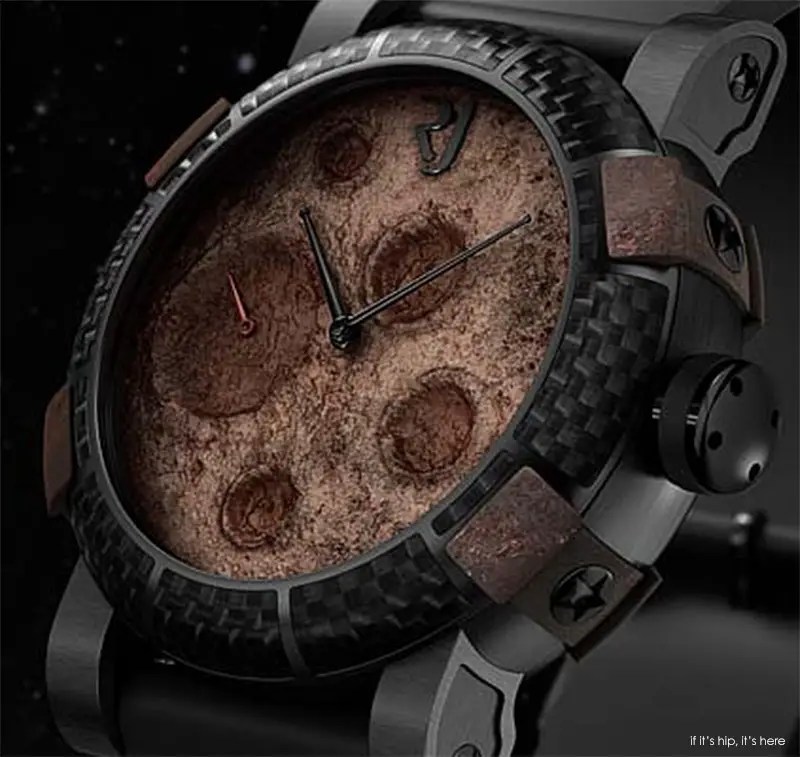 Authentic Moon dust, fragments of the Apollo XI and Soyuz spacecraft, as well as elements from the International Space Station (the strap is made from an astronaut’s suit that has actually been on a space mission) have been integrated into the newest collection of exceptional timepieces from Romain Jerome.

As part of its DNA of Famous Legends concept, featuring timepieces inspired by and created in tribute to the great legends of our times, the Maison Romain Jerome presents its second exclusive collection, entitled Moon Dust-DNA. Legitimately proud of its Titanic-DNA collection dedicated to the world’s greatest maritime legend, Romain Jerome launches out into space in homage to the most fascinating human adventure of all: the conquest of space.

The models vary in color and materials. Brown or black faces that have mineral and moon dust deposits are available as well as options in rose gold or white gold along with several various bezel accents: The design of the Moon Dust-DNA collection is inspired by and incorporates the DNA heritage of the great players and major figures in the conquest of space. The materials composing the models in this collection incorporate authentic fragments from the aerospace universe such as moon dust as well as fragments of the Apollo XI and Soyuz spacecraft and the International Space Station (ISS). Moon Dust-DNA features
• A lunar dial based on a mineral deposit including Moon dust;
• A 46 mm steel and titanium case incorporating steel from the Apollo XI spacecraft;
• Rusted steel paws including fragments of the Soyuz spacecraft; and
• A strap composed of fibers from a spacesuit worn during the ISS mission.*

*Romain Jerome guarantees that the origin of each of these materials is duly certified by a legal document authenticated in Switzerland. Each piece in the Moon Dust-DNA collection will also be accompanied by a certificate from the Association of Space Explorers (ASE) saluting the approach of Romain Jerome and the tribute it is thereby rendering to the conquest of space.

Never saw his watches made from actual pieces of the Titanic?

2020 BAFTA Beauties: The Greatest Gowns from Across The Pond