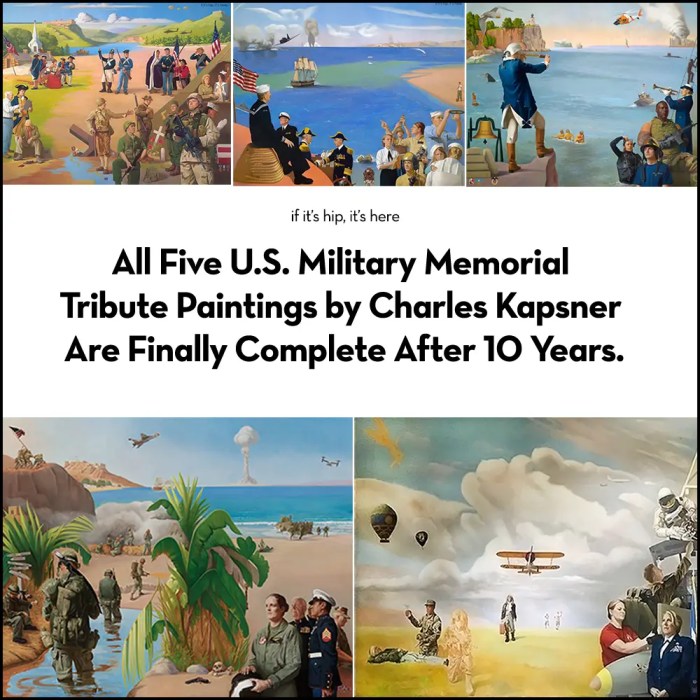 Back in 2015 I shared with you Looking To The Past: The Veterans Educational Historic Project for which The Minnesota State Veterans Cemetery Memorial Association commissioned artist Charles Kapsner to embellish the cemetery’s Committal Hall with 5 large oil paintings, one for each branch of the US Military. At that time the first three paintings of the five had just been completed.

The large oil paintings by artist Charles Kapsner were created to honor of the Army, Navy, Coast Guard, Marine Corps and Air Force and took over ten years to complete. At the time I first introduced you to these, only The Army, The Navy and The Coast Guard paintings had been completed. Now, all five are finally finished.

The series “Looking To The Past: The Veterans Educational Historic Project” is comprised of five color oil paintings each of which measures 8′ x 10′ and are on permanent display in the Minnesota Cemetery’s Committal Hall. The paintings, each of which uniquely captures the spirit of each branch of service, took artist Kapsner over 10 years to complete.

Each represents all who served, commemorating their sacrifices in all wars, rather than eulogizing a particular war. Beyond being a memorial to our nation’s fighting men and women, the paintings will serve as an educational tool to help future generations understand our history and the vital role our military plays in maintaining our freedom and democracy.

The paintings capture the spirit of each branch of service, vividly portraying the stories, faces, and sacrifices of our Nation’s servicemen and women. Many of the paintings’ subjects were actual Veterans and active duty personnel who sat for Kapsner.

Now the two newest which were not featured in our previous post.

The Air Force Painting (2019) was the fourth of the five 8 X 10 ft paintings comprising the Veterans Historic Art Monument, installed at the Committal Hall at the Minnesota State Veterans Cemetery north of Little Falls, MN. This painting joins three previously completed ones shown above and depicts the history of, and contributions by our nation’s military men and women.

If you’d like to see sketches and other details of the first three U.S. Military Tribute Paintings, be sure to visit our previous post here.