` Mask New York Ad Contest - If It's Hip, It's Here
Skip to content Who needs an ad agency? Over the past two weeks Governor Andrew Cuomo and the state of New York solicited more than 600 submissions from across the state as part of their “Wear a Mask New York Ad Contest.” They’ve now narrowed it down to five finalists and it’s your last chance to weigh-in with an online vote before the winner is announced on May 26th. 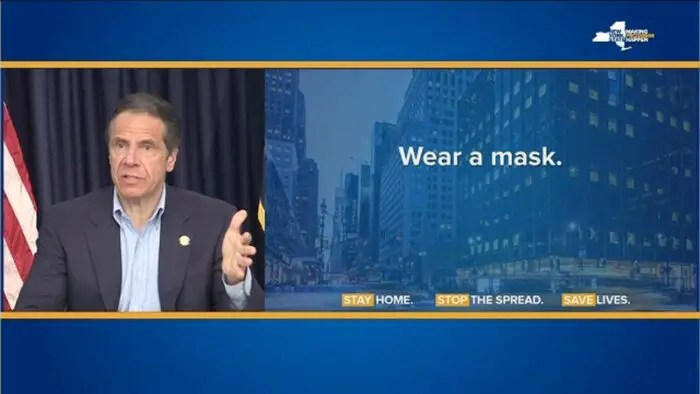 Governor Cuomo asked New Yorkers (although it appears anyone can vote) to choose their favorite from the five finalists below. Voting closes May 25, and results will be announced May 26.

UPDATE May 26th: First place winner was awarded to Bunny Lake Products for We ❤ NY. Second place went to “You Can Still Smile” by Natalia Bougadellis and Emory Parker.

“You Can Still Smile” Natalia Bougadellis and Emory Parker

“We asked New Yorkers why they put on a mask everyday. Through the struggle, there is hope—in their eyes and in their words. Produced by Blue Slate Films, a female-run production company.” – Natalia Bougadellis and Emory Parker

“We Are Compassion. We Are New York” by Skyline99 Studios

“We created this short PSA for New York out of Love and Compassion for others. Watch as an unlikely stranger helps another less fortunate in need”. – Skyline 99 Studios

“That Guy” by Plastic Tree Productions

“We all know “That Guy.” The blissful unmasked foe who no one wants to be near and who the people of New York will avoid at all costs. The moral? Don’t be That Guy. Cover your nose and mouth.” – Plastic Tree Productions

“Do The Right Thing” by Ian Bell

“New Yorkers Do What’s Right. They know that the best thing they can do to stop the spread of Covid-19 is to wear a mask when they’re around others. That’s why New Yorkers of every color, creed, sexual orientation and gender identity are practicing social distancing and wearing masks in public. They know that our individual strength is our collective inheritance. They Know What’s Right.” – Ian Bell

The contest has since ended

Equinox Kicks Off 2016 With Another Provocative Ad Campaign.