There seem to be an endless number of talented artists creating portraits using assemblages of unexpected items; licorice, junk, toys, pills, pencils, diamonds, pushpins and more. We have already featured nine different artists who create portraits from such items unusual work on this blog and now I’m introducing you to a tenth, Mary Ellen Croteau.

Mary Ellen Croteau had been working with plastic bottle caps to create colorful columnar sculptures, but while crafting these, she became compelled to create a large self-portrait with them. “Plastic bottle caps – like bags, a plastic product that can’t be/ isn’t recycled. I conceived of an “endless column” of these caps, after Constantin Brancussi’s (sic) iconic modernist sculpture. One became two, and two became many…: – Mary Ellen Croteau …While making these columns, I noticed the smaller caps tended to nest inside one another, and the color combinations reminded me of Chuck Close’s painted portraits. So I got sidetracked and started on a large self-portrait made entirely of bottle caps. The piece measures 8 feet by 7 feet. No paint is used, except to delineate a few shadows where white board was showing through. In a few cases, the caps are trimmed in order to fit a tight space.” – Mary Ellen Croteau 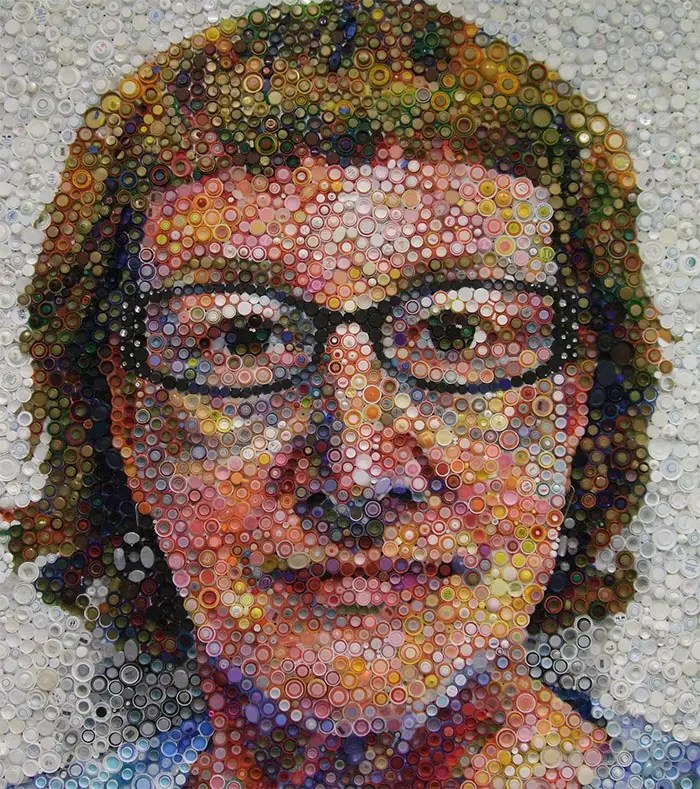 close-up of the nose: close up of eye in progress: 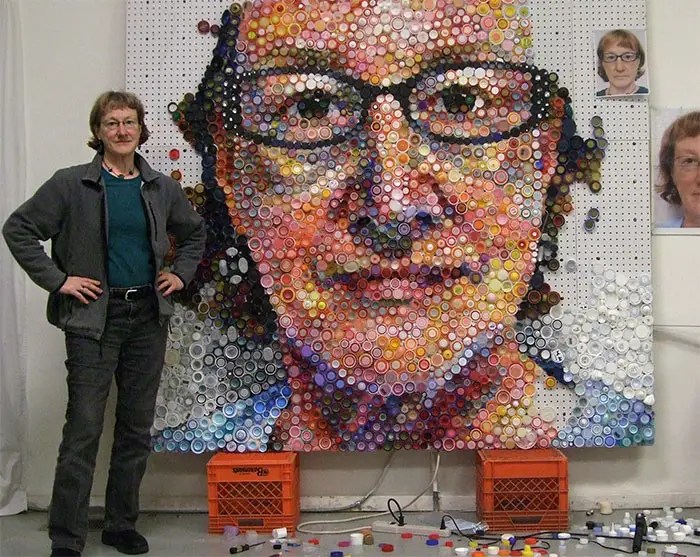 The final assembled piece displayed for Art on Armitage in Chicago: Mary Ellen Croteau is an artist whose work directly addresses the absurdities of social norms, and lays bare the underlying bias and sexist assumptions on which our culture is constructed. She lives and works in Chicago, IL.

Nine other artists who create portraits and images with objects: Lipstick Sculptures by Artist May Sum Will Leave Your Mouth Agape.

Wood Sculptures That look Like Anything But. The Work Of Ricky Swallow.