` Lexus Debuts Sport Yacht Concept in Miami, Florida - If It's Hip, It's Here
Skip to content Lexus has unveiled a new sport yacht concept, a one-off project that expresses how the Lexus design philosophies and brand lifestyle might be introduced to a sea-faring product. The yacht was unveiled to the public by Akio Toyoda, President of Toyota Vehicles, at Di Lido Island in Biscayne Bay, Florida last week. 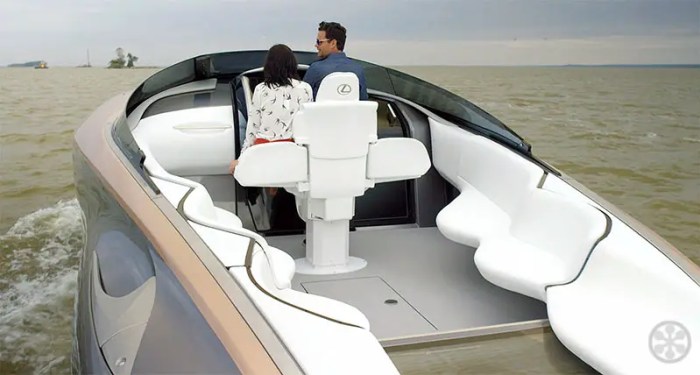 The inspiration for the Lexus sport yacht concept can be traced back a few years to the Toyota Marine Department’s preparations for a new range of premium Ponam yachts that are soon to be launched in Japan. Toyota President Akio Toyoda was invited to spend several days driving the new craft and he was impressed by the power of the turbodiesel engines and the handling and stability of the advanced hull designs. As Lexus International’s Chief Branding Officer, he also recognized how a stylish performance yacht could complement the Lexus lifestyle profile. Consequently the marine department explored how such a yacht could extend the Lexus brand into new areas. The result is a running proof-of-concept Lexus Sport Yacht. 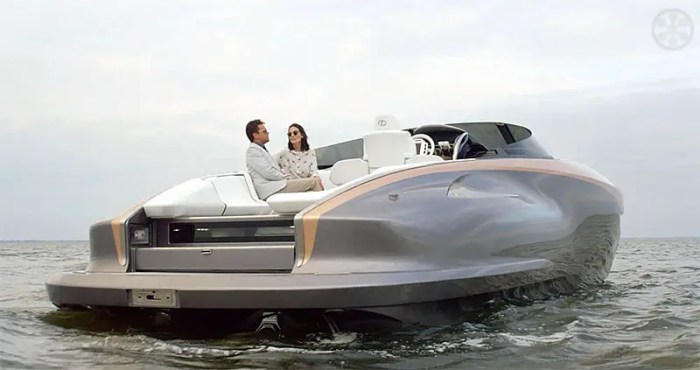 “This concept for a Lexus Sport Yacht allowed us to explore how Lexus design language could be applied to a maritime lifestyle,” said Yoshihiro Sawa, executive vice president of Lexus International. “For the Lexus Design Center this project has been very exciting. The effort is valuable to us as it stirs our creative energies and pushes our imagination to design and lifestyle possibilities outside of the automotive realm we know well.”

Design
A brief was given to two separate teams at the Lexus Design Centre in Japan to create an open sport yacht for recreational day sailing, accommodating six to eight people, powered by twin high-performance Lexus V8 engines, with advanced handling and styling. Their concepts were submitted for evaluation in summer 2015.

“This allowed us to explore how Lexus design language could be applied to a maritime idea,” said Yoshihiro Sawa, Lexus International Vice President. “For the Lexus Design Centre this project has been very exciting. The effort is valuable to us as it stirs our creative energies and pushes our imagination to design and lifestyle possibilities outside of the automotive realm we know so well.”

The selected proposal was refined throughout 2015, with the Marine Department engineering the construction and on-board marine systems. 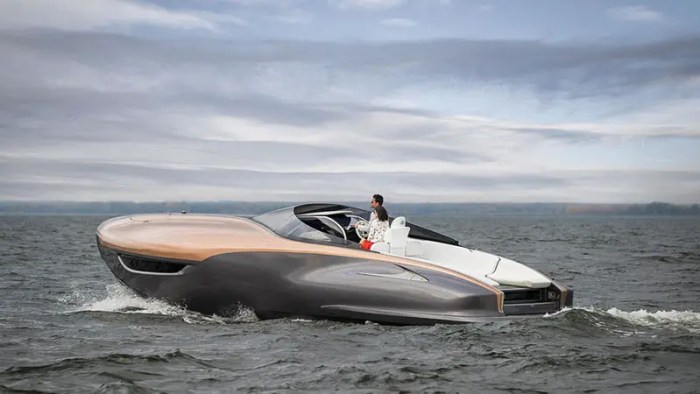 The Marine Department selected the Marquis-Carver Yacht Group, based in Wisconsin, to build the concept, based on its engineering and manufacturing capabilities and its skills in working with large, hand-laid, composite structures. 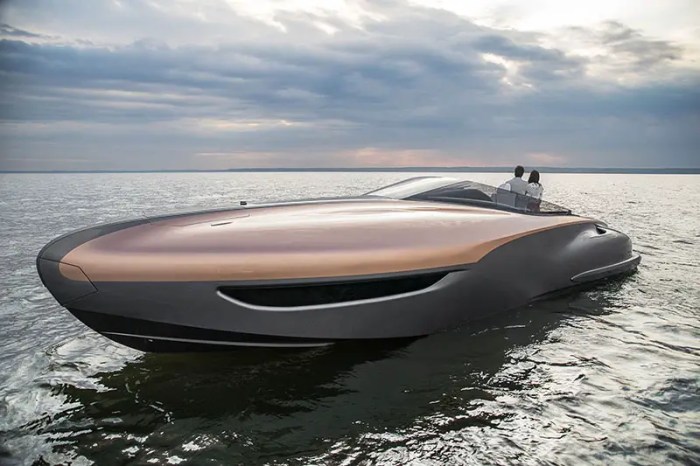 The upper deck and outer hull are seamlessly bonded around an inner structure. Each piece is a single, massive structure made from hand-laid Carbon Fibre Reinforced Plastic (CFRP). 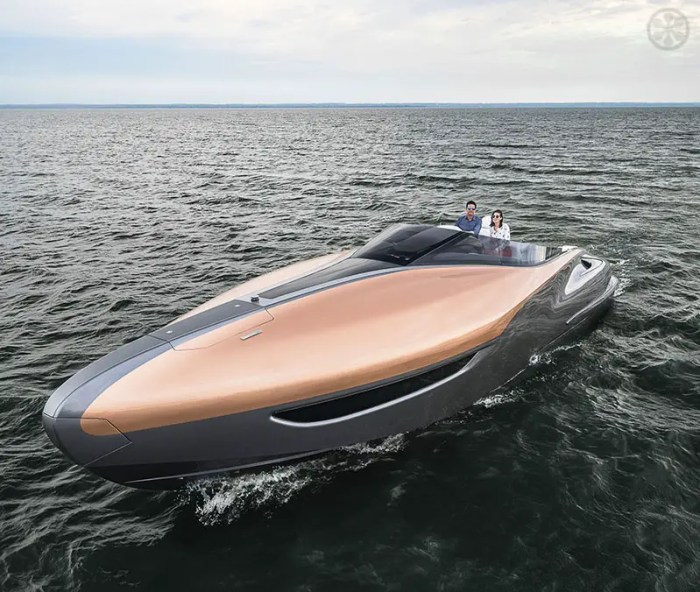 CFRP is a materials technology used in the construction of race cars and road-going supercars such as the Lexus LFA, as well as for high-performance aircraft, competition skis and bicycles and world-class racing yachts. 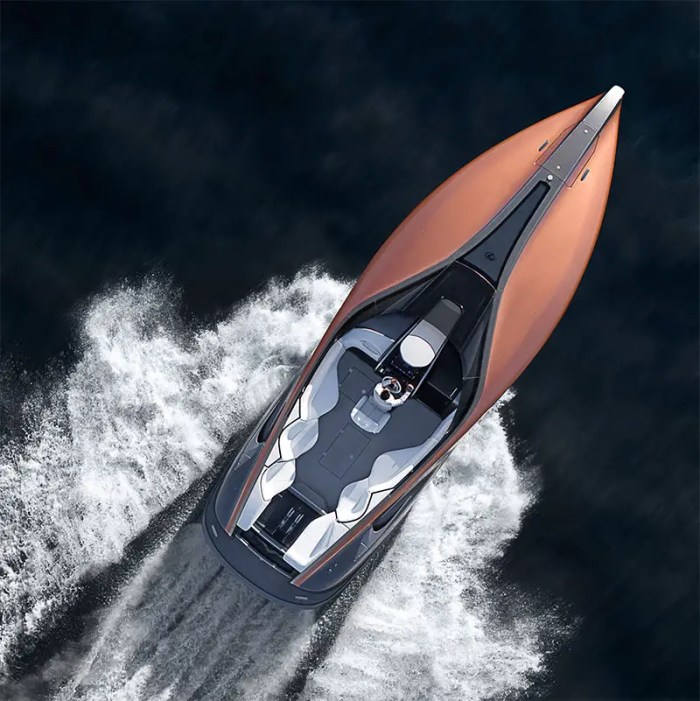 The Lexus Sport Yacht’s CFRP construction saves almost a tonne compared to the weight of a similar yacht made from Fibreglass Reinforced Plastic (FRP). The underwater hull has a stepped design to reduce drag and improve handling balance at high speeds. The concept is powered by twin 5.0-litre V8 petrol engines, based on the high-performance unit featured in the Lexus RC F coupe, GS F sport saloon and the new LC 500 luxury coupe. 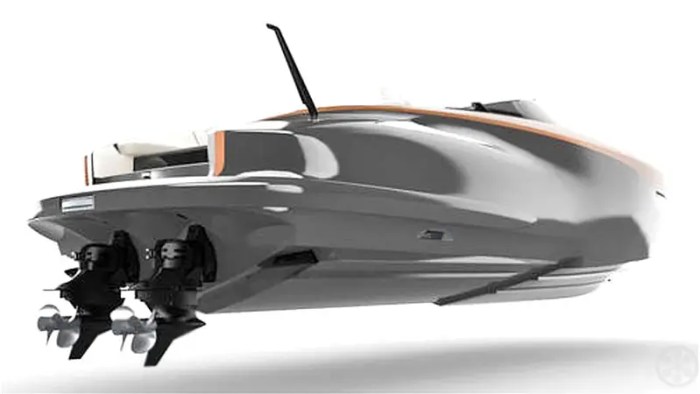 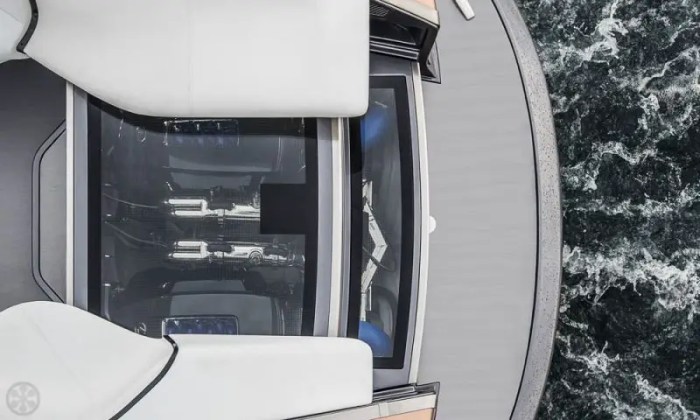 Each engine produces more than 440bhp/328kW, driving the yacht at speeds up to 43 knots (49mph) through a pair of hydraulically controlled inboard/outboard stern drives. 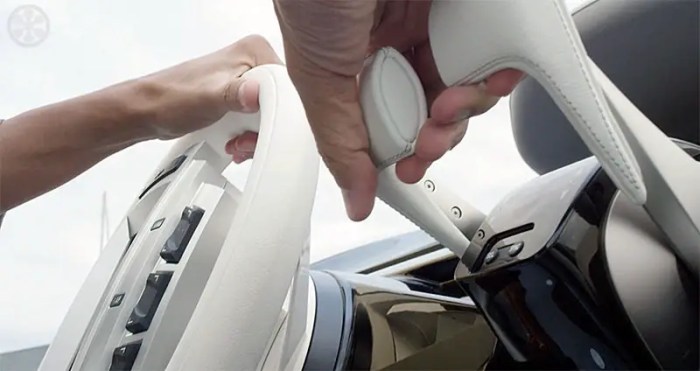 A bow-thruster with joystick control aids with docking. The captain’s seat is power-adjustable with armrests that fold out to become jump seats on either side. 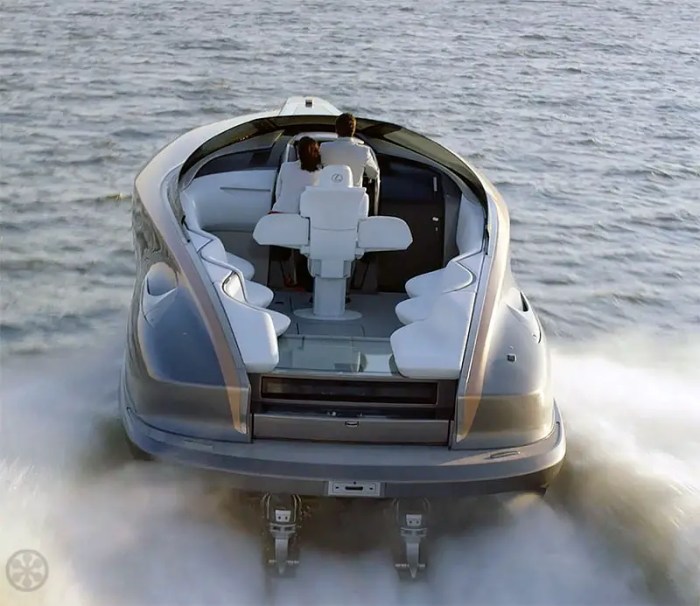 The standing-height forward passenger cabin is finished in luxurious Lexus leather with wood and glass details. Sofa seating for six, a table and air conditioning create a comfortable environment for entertaining.

In the galley there is a two-burner stove, sink and under-counter refrigerator. The facilities in the head include a shower. Videoworks of Italy have created the fully networked, integrated audio and video entertainment system, with 4G, WiFi and WAN. Sound reproduction is by Revolution Acoustics surface-mounted drivers using the ceiling panel as a transducer, powered by a Mark Levinson Reference digital amplifier.

There is no intention to put the yacht into production.

images and information courtesy of The Lexus UK Blog and The Lexus Enthusiast , Lexus Press Room and The Awesomer

The Expandable Yacht. The Wider 42’ and Their New Cote D’Azur Edition.