` Elizabeth Patterson's Paris Drawings on If It's Hip, It's Here
Skip to content Artist Elizabeth Patterson is known for her hyper realistic drawings of urban scenes seen through rain-streaked glass. For the past few years (2014-2016) she has been using Paris as the venue for her works and they are as compelling as ever.

The Pennsylvania-born artist has mastered the technique of employing colored pencil, graphite and a touch of solvent to give the illusion of peering at the outside world, cloaked in pouring rain.

Patterson places the viewer behind a window or inside a car, effectively separating them from the scenes, shielding them from the rain; while simultaneously placing them there – a first hand witness to Mother Nature.

Her scenes of Paris landmarks and places combine an ambient gloom punctuated with the bright colors and lights of the city. They evoke a sense of familiarity – all of us having peered at a rain soaked city through a window at some point in our lives – and yet, they introduce us to places we may not have been.

A refreshing way to depict the urban landscape, they somehow instill a sense of comfort as opposed to a sense of cold, as one might expect.

Some of this recent work can be seen in her present exhibition, Elizabeth Patterson: Paris & Other Places, at Louis Stern Fine Arts through February 2017. 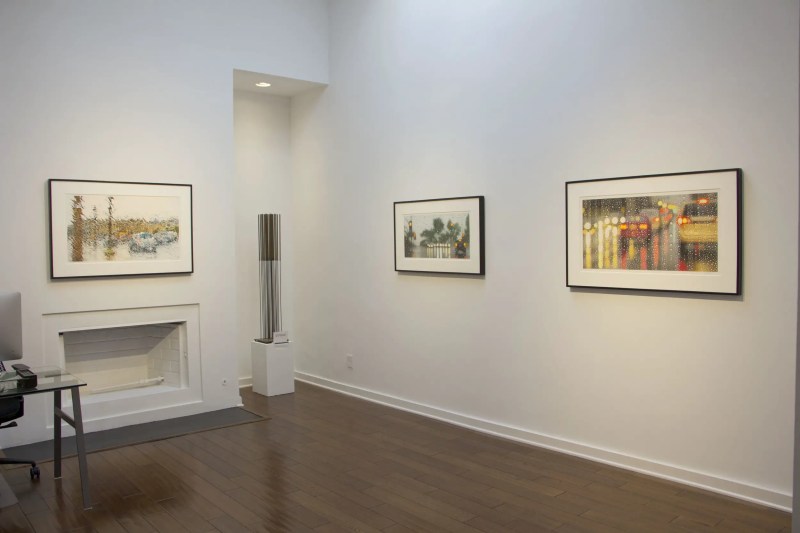 Ms. Patterson is a member of the Colored Pencil Society of America where her work has won numerous awards including the prestigious honor of signature status. Earlier in 2016, the artist was featured in her second solo exhibition at Galerie Louis Carré in Paris, France.

See more of her work at Elizabeth Patterson