` Hollywood Costume Design Exhibit - If It's Hip, It's Here
Skip to content 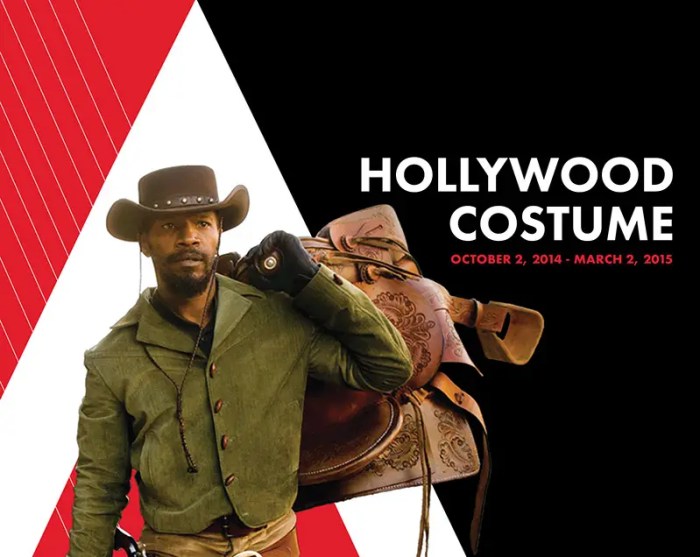 Just in time for Halloween, The Academy Brings the Hollywood Costume to the iconic Wilshire May Company Building featuring costumes from The Hunger Games, Django Unchained, The Wizard of Oz and more.  Here’s a peek at what you will see as well as how the exhibit has been promoted.

The Victoria and Albert Museum, London and the Academy of Motion Picture Arts and Sciences present the final showing of the groundbreaking multimedia exhibition Hollywood Costume in Los Angeles. Bringing together over 100 of the most iconic movie costumes from across a century of film-making, it is a once-in-a-lifetime opportunity to see the clothes worn by unforgettable and beloved characters such as Dorothy Gale, Indiana Jones, Scarlett O’Hara, Jack Sparrow, Holly Golightly and Darth Vader.

Hollywood costume explores the central role of costume design – from the glamorous to the very subtle – as an essential tool of cinematic storytelling and brings together the world’s most iconic costumes from the Golden Age of cinema to the present.

The Academy is enhancing the V&A’s exhibition and will include more than 150 costumes. The Academy’s presentation will add more than 40 costumes to this landmark show, including Jared Leto’s costume from Dallas Buyers Club (Kurt and Bart, 2013) – a recent acquisition from the Academy’s Collection – as well as costumes from such recent releases including The Hunger Games (Judianna Makovsky, 2012), Django Unchained (Sharen Davis, 2012), Lee Daniels’ The Butler (Ruth E. Carter, 2013), The Wolf of Wall Street (Sandy Powell, 2013), American Hustle (Michael Wilkinson, 2013), and The Great Gatsby (Catherine Martin, 2013).

In addition, Hollywood Costume will showcase the Academy’s pair of the most famous shoes in the world – the original ruby slippers from The Wizard of Oz (Adrian, 1939) shown with Dorothy’s blue and white gingham pinafore dress.

By the way, fans of The Wizard of Oz may want to see the re-imagined versions of Dorothy’s Ruby Slippers by famous fashion designers here

Some interesting factoids about movie costumes: Much has been done to promote the exhibit, including a dress made of paper and minimalist graphic design interpretations of famous movie costumes. 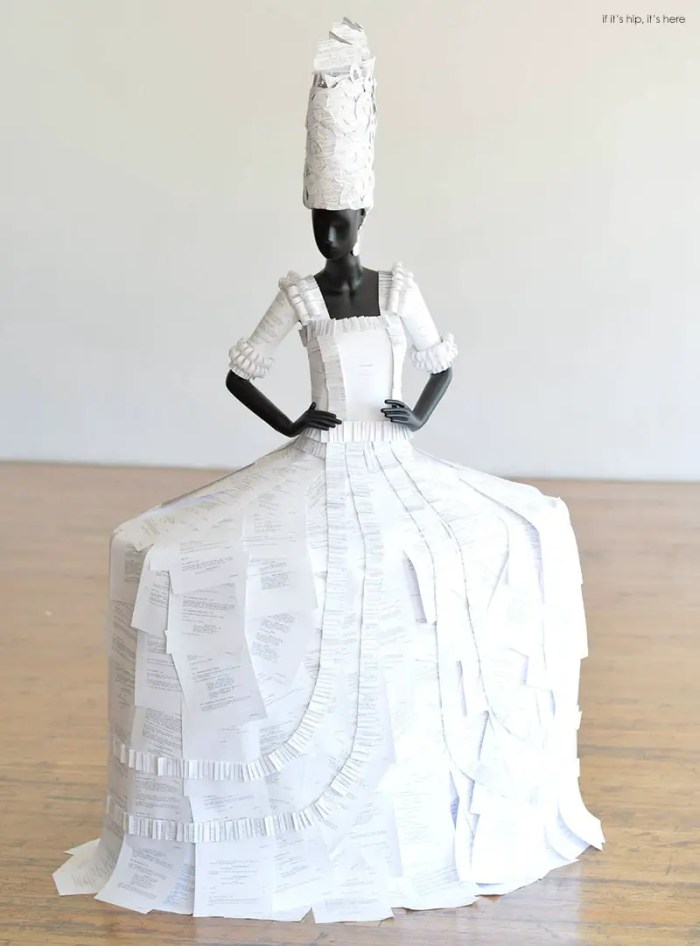 The dress was inspired by Dunst’s elaborate costumes in Coppola’s marie Antoinette (2006): 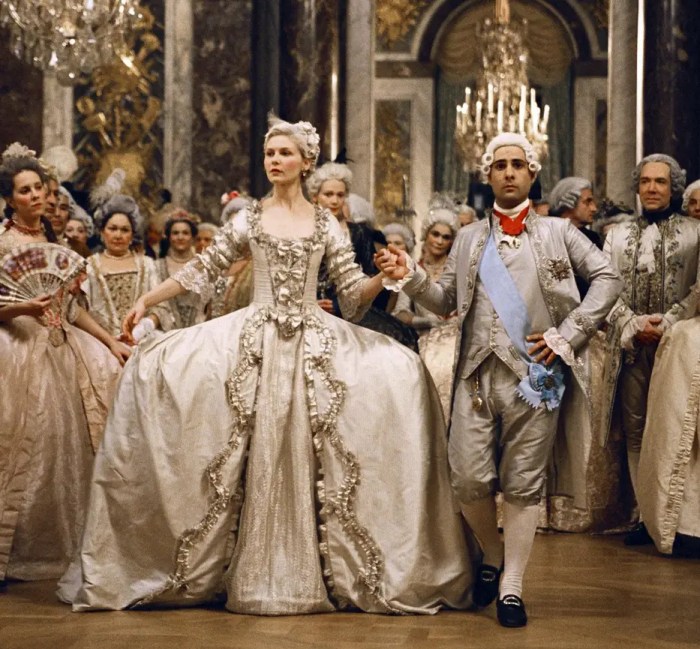 Watch as artist Jum Nakao, known for his dresses made of paper, turns Sofia Coppola’s movie script into a dress:

And the Academy has been posting these Hollywood Costume Cards on social media to promote the exhibit: 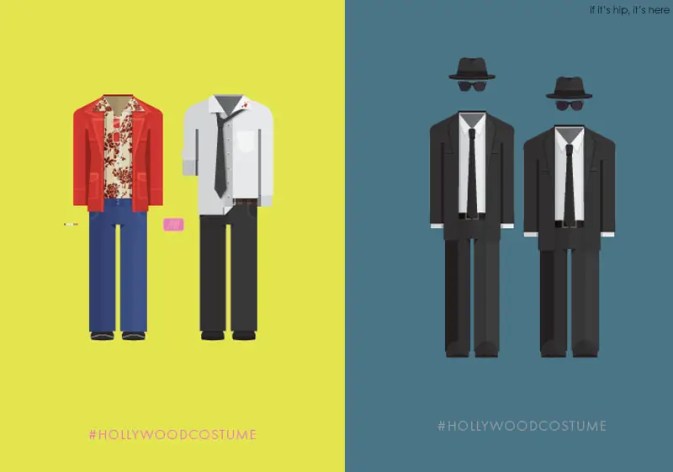 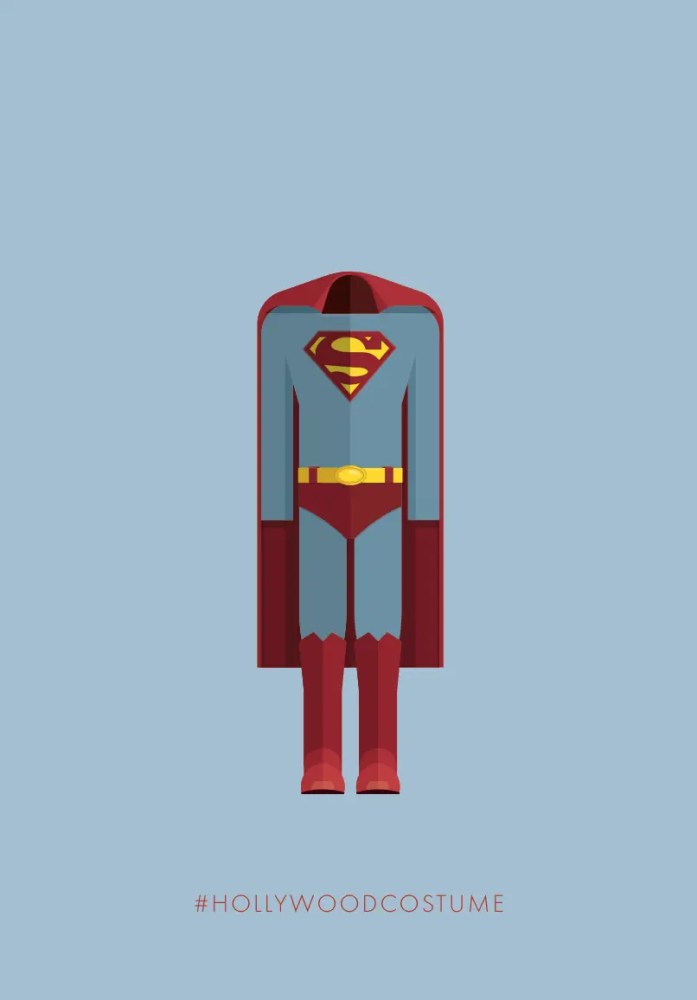 Featuring the most beloved costume designs from the past 100 years of Hollywood films, Hollywood Costume celebrates, for the very first time, the costume designer’s contribution to the telling of the cinematic story. Published in conjunction with an exhibition launched at the Victoria and Albert Museum in London that the New York Times called “extraordinary,” the book showcases the talents of renowned designers such as Adrian, Edith Head, and Sandy Powell, among many others, whose work spans the silent era to the Golden Age of Hollywood to the present day. Essays by a wide variety of leading scholars, archivists, and private collectors, as well as contributions by contemporary costume designers, actors, and directors, take a close look at the conventions of what is considered “costume” and the role of the designer in creating a film’s characters and helping to shape its narrative. With memorable wardrobe classics from The Tramp, Ben-Hur, Cleopatra, The Wizard of Oz, Gone with the Wind, Pirates of the Caribbean, Ocean’s Eleven, Sherlock Holmes, Avatar, and many more, Hollywood Costume is the ultimate volume for fashionistas and film lovers alike.

“More than a book, it’s a display and worthy of every coffee table.” —DailyCandy Hollywood Costume will be accompanied by a full slate of exhibition-related programs including screenings, discussions with costume designers, and educational programs.

• Swarovski is the presenting sponsor of Hollywood Costume. Additional support is provided by Pirelli.

• Friends of LACMA: Use discount code MAYCO to receive $5 off admission

The exhibition is located at 6067 Wilshire Boulevard in the Wilshire May Company Building, on the corner of Wilshire and Fairfax, Los Angeles 90036, next to LACMA. (The future location for the Academy Museum) Entrance to the exhibition is on the north side of the building.

The Magnificent and Maniacal Smile Art of Yue Minjun.