Okay, so maybe that’s a crass way of referring to the unusual art installation, but it’s accurate. “Hase” (also referred to as Rabbit or Colletto Fava) is a 200 foot long by 20 foot tall knit pink rabbit that was placed in the Italian Alps by the Australian Art Collective Gelitin. The giant pink art piece was laid to rest upon a hilltop in 2005 and left there so its decay could be documented.

Situated above the village Artesina in the Italian Alps, the giant Rabbit was knit of pale pink wool by actual grandmothers over the course of five years.

Upon its completion, the 60 meter long x 6 meter tall woolen sculpture was placed, supine, like a giant inviting pillow on a Piedmont, Italy hilltop in 2005. 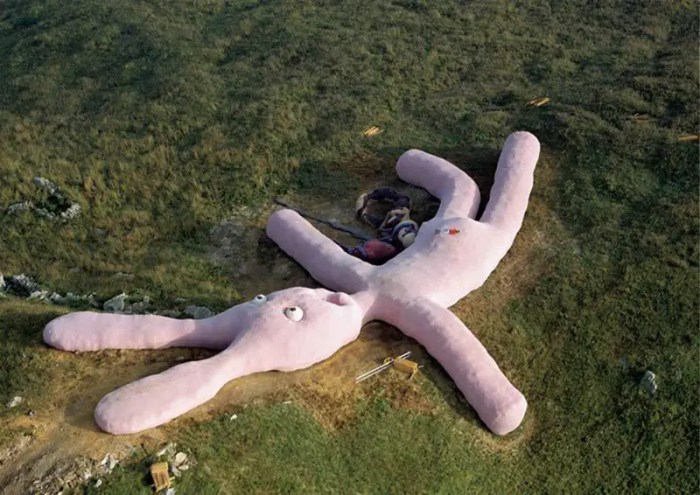 Little ladders were placed around the piece, turning visitors into Lilliputians as they climbed atop it. 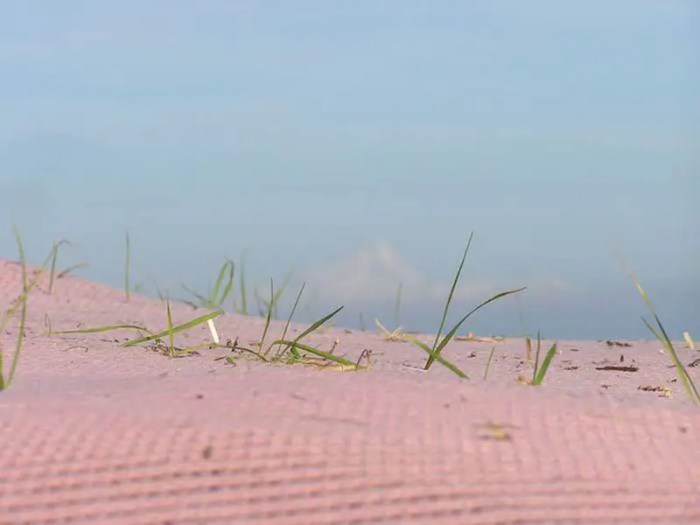 The things one finds wandering in a landscape: familiar things and utterly unknown, like a flower one has never seen before, or, as Columbus discovered, an inexplicable continent;
and then, behind a hill, as if knitted by giant grandmothers, lies this vast rabbit, to make you feel as small as a daisy.
The toilet-paper-pink creature lies on its back: a rabbit-mountain like Gulliver in Lilliput. Happy you feel as you climb up along its ears, almost falling into its cavernous mouth, to the belly-summit and look out over the pink woolen landscape of the rabbit’s body, a country dropped from the sky;
ears and limbs sneaking into the distance; from its side flowing heart, liver and intestines.
Happily in love you step down the decaying corpse, through the wound, now small like a maggot, over woolen kidney and bowel.
Happy you leave like the larva that gets its wings from an innocent carcass at the roadside.
Such is the happiness which made this rabbit.
I love the rabbit the rabbit loves me.
– Gelitin

Intended to be left there indefinitely, Gelitin has continued to visit the piece every few years to photograph its demise.

Gelitin is an artist collective made up of members Tobias Urban, Wolfgang Gantner, Florian Reither, and Ali Janka. Founded in 1993 and based in Vienna, the group is best known for their unconventional exhibitions and sensationalist artistic happenings where they push the patience of art dealers, the boundaries of art, public expectation, and spectacle.

Images courtesy of Gelitin, Perrotin Gallery and This Is Tomorrow Magazine

Freeways and Overpasses: An Artists’ Muse. Part I.

Portraits Drawn On World and Celestial Maps by Ed Fairburn