` The Super Bowl Spot That Pissed Off Puppy Lovers. - If It's Hip, It's Here
Skip to content 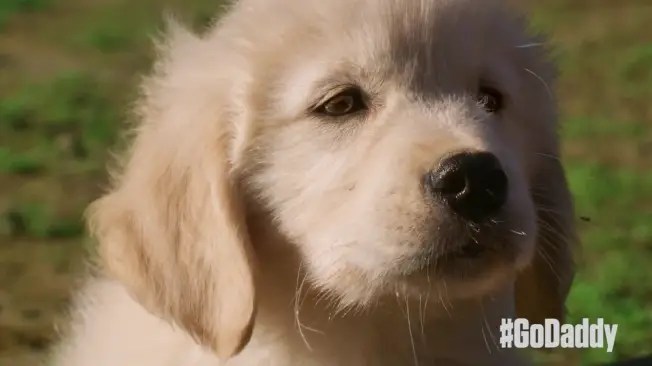 The 2015 GoDaddy Super Bowl puppy ad by creative agency Barton F. Graf 9000 grabbed your attention with an adorable Golden Retriever puppy only to surprise you with a very unexpected ending that made the fur on many a dog-lover stand up. Petitions, articles and You Tube comments were so negative that Go Daddy caved and made the decision yesterday afternoon to pull the spot from the game. This dog-lover was truly surprised at the number of people outraged about this, because it was funny advertising for the internet registrar and web-hosting company.

So, what was the commercial that caused all the controversy?
The minute long ‘Journey Home’ that poked fun at the beloved Budweiser puppy spots has since been pulled from the internet, but here’s the gist along with some stills from it.

The ad opened with a puppy at night who appeared lost and alone. 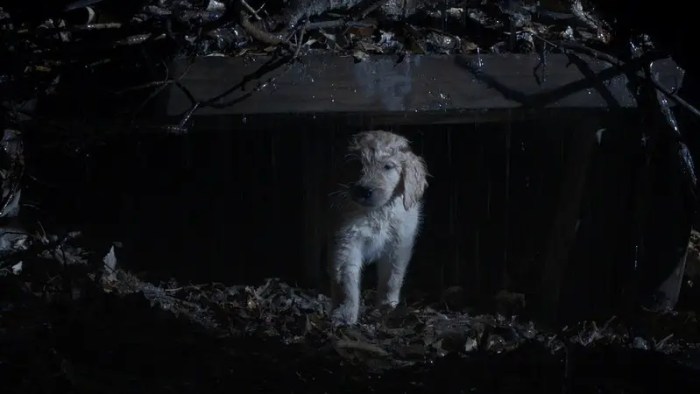 Much to the viewer’s delight, the puppy made its way home to a large farm at daybreak.

There he was scooped up happily by a female proclaiming something to the effect of “Buddy! I’m so glad  you found your way back – because we just sold you!” At which point we cut to an ipad featuring a photo of the pup with a big sold sign slapped across it.

Then we see the pup placed in a van whose logo reads Gabby’s Goldens and is driven off by previous GoDaddy spokesman Danica Patrick, making a cameo. 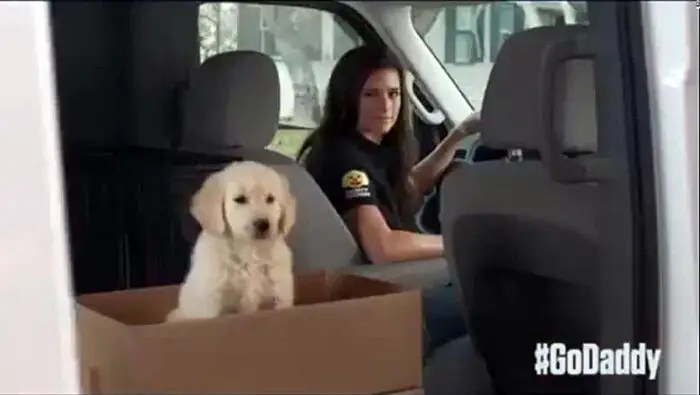 I laughed aloud. But apparently, I was the only one.

First off, before you shoot me a scathing e-mail, let me say that I’m an advocate of animal rights and the owner of a rescue dog/ fur baby who sleeps in my bed and is better fed than I. I’m against buying dogs at pet stores or from puppy mills and against the unethical treatment of any living thing. But this ad, which chose a dog breeder as an example of an e-commerce site because of the overuse of adorable puppies in Super Bowl media, angered dog and animal lovers everywhere. There was even a petition to have the spot removed from the game. 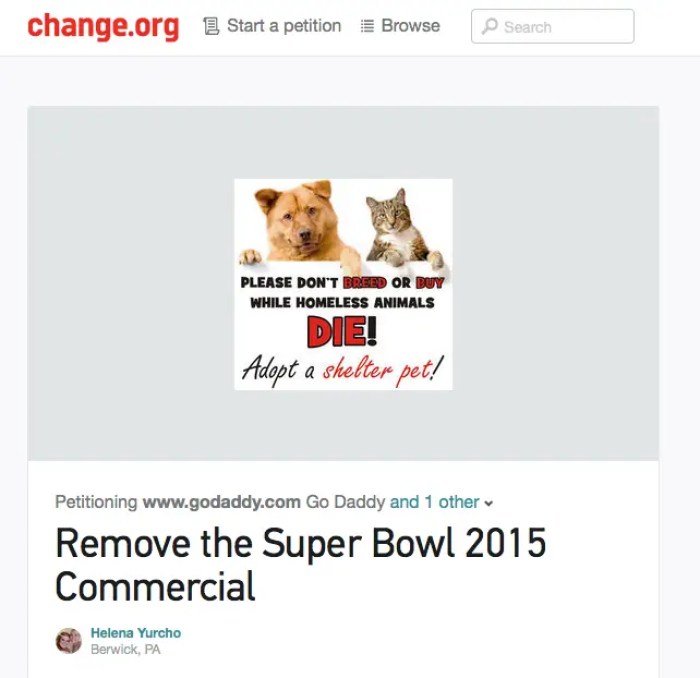 Most claimed it was advocating puppy mills, but there are responsible breeders out there and I’m quoting The Humane Society here when I say “Responsible dog breeders can play a vital role in the effort to help stop puppy mills by offering perspective and guidance on the proper ways to care for breeding dogs and puppies and educating prospective buyers about the importance of humane care.”

Given that the majority of people still get their Goldens from breeders, who’s to say that “Gabby’s Goldens” (the faux breeder in the ad) isn’t a responsible breeder? There weren’t any tiny cages or inhuman treatment in the ad, but a large open grassy farm with animals roaming about freely. Where did everyone’s sense of humor go?

As you can see from the You Tube channel screen grab below, the dislikes heavily outweighed the likes and the top comments expressed disgust and anger at the spot on midday Tuesday afternoon: 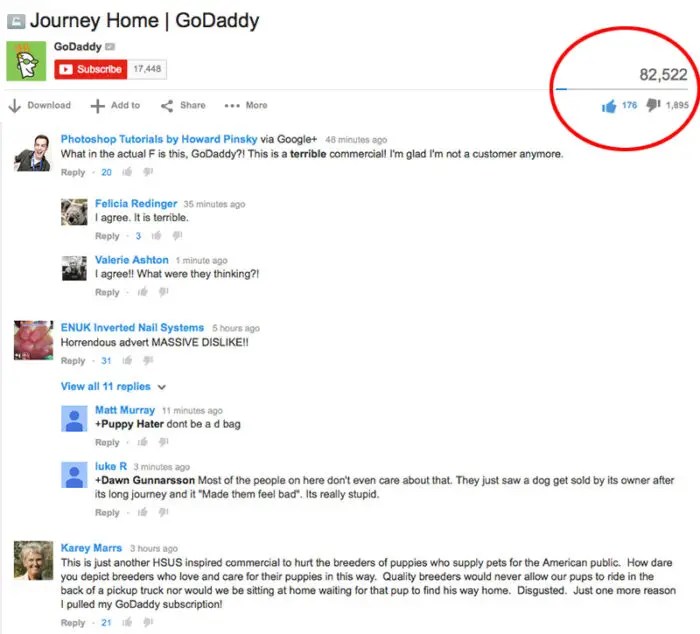 The ad was not meant to promote puppy mills or to mock animal welfare, it was about hosting an e-commerce site and it poked fun (obviously) at the age old ‘puppy-tugging-at-your-heartstrings” cliché seen in Budweiser’s’ Super Bowl spots and the Puppy Bowl to do so. To say it was an improvement over most of their past spots for the brand is an understatement. “Journey Home” was a tongue-in-cheek approach that was a far cry from GoDaddy’s previous Super Bowl spots which used cheesy sex jokes, the Go Daddy Girls, and NASCAR darling Danica Patrick. In defense of the company’s advertising, their work with Deutsch NY (and Barton F Graf 9000) from 2012-2014 was an improvement over the previous work.

After this year’s spot aired on a talk show and on YouTube a flood of negative comments and publicity ensued. GoDaddy listened and responded with the following:

This morning we previewed GoDaddy’s Super Bowl spot on a popular talk show, and shortly after a controversy started to swirl about Buddy, our puppy, being sold online. The responses were emotional and direct. Many people urged us not to run the ad.

We’ve made a tremendous amount of progress over the past two years, advancing the GoDaddy brand as a company that cares a great deal about small business and is in their corner to help them succeed. People increasingly know who we are, what we do and who we do it for. At the end of the day, our purpose at GoDaddy is to help small businesses around the world build a successful online presence. We hoped our ad would increase awareness of that cause. However, we underestimated the emotional response. And we heard that loud and clear.

The net result? We are pulling the ad from the Super Bowl. You’ll still see us in the Big Game this year, and we hope it makes you laugh.

Finally, rest assured, Buddy came to us from a reputable and loving breeder in California. He’s now part of the GoDaddy family as our Chief Companion Officer and he lives permanently with one of our longtime employees.

Responding to the uproar, GoDaddy CEO Blake Irving said on Twitter that the commercial “clearly missed the mark” and vowed that it wouldn’t be aired.

Now, don’t get me wrong, I think GoDaddy did the right thing, given the reaction. But it’s the reaction that I think “missed the mark” as opposed to the ad.

Adweek has a Q&A with Barton F. Graf about his approach to making Super Bowl spots here

Meet 10 Dogs Who Deserve More Followers Than You

The Lavazza 2008 Calendar: A Most Majestic Experience