you are here: if it's hip, it's here » celebrities » celebrity deaths » From His Glove to His Limo: The King Of Pop’s Neverland Ranch Auction

I don’t know if I find this sad, creepy, interesting or exciting (frankly, all of the aforementioned), but The Gloved One’s items from his now Notorious Neverland Ranch are being auctioned off in a little over a month and I’ve got the lowdown for you, from the auction catalog covers to some of the actual auction items and their estimated prices.

The immense collection represents the personal property and contents of Michael Jackson’s private amusement park and family residence to be sold during a live auction, televised and real-time online auction broadcast by Auction Network to be held at 9900 Wilshire Blvd adjacent to the Beverly Hilton Hotel from April 22nd through April 25th, 2009.

Iconic memorabilia from Jackson’s career is featured alongside his luxurious home furnishings and profuse amusements in this once-in-a-lifetime auction of Neverland Ranch.

King of Pop: A once in a lifetime Auction Featuring The Personal Property of Michael Jackson with a Portion of the Proceeds Benefiting MusiCares®

above: The boxed set of the five auction catalogs (shown individually below) is available for purchase here, either signed or unsigned. 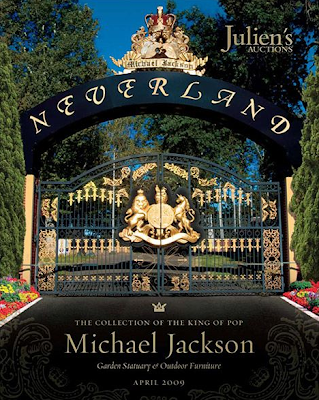 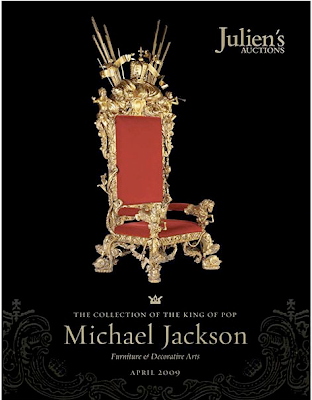 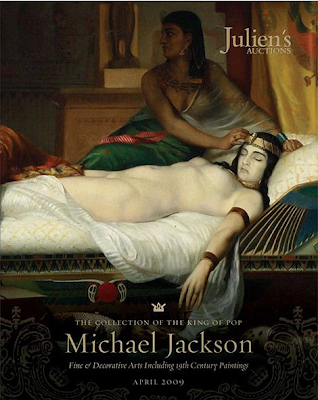 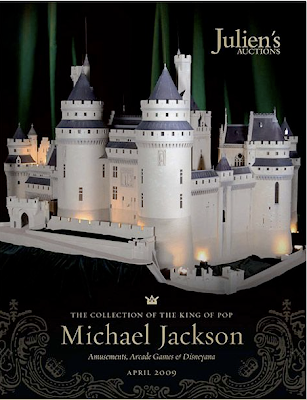 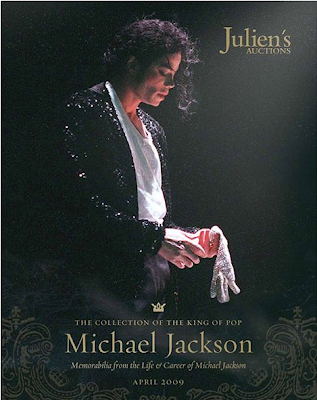 Observer Music Monthly has obtained this world exclusive preview of some of the items going under the hammer, and here are some of the more interesting ones:

above: A pair of Michael Jackson’s Triumph-era socks with uppers covered in rhinestone banding. They date back to his 1981 Triumph tour with the Jacksons. Guide price $600-$800

above: An electric cart featuring an image of Jackson as Peter Pan on the bonnet and Peter Pan cushions. Guide price $4,000-$6,000

above: A robotic Michael Jackson head featured at the climax of his 1988 film Moonwalker, when he transforms into a robot and defeats Joe Pesci’s evil character, Mr Big. Guide price $2,000-$3,000

The robotic head lights up as each piece of the face pushes out and expands before retracting back into the shape of Jackson’s face. It still animates at the push of a button

above: A Brevetti Gaggia espresso and cappuccino machine. Two tone metal featuring polished chrome with bands of repouss&ecute; and reticulated brass. Tank bears a Neverland plaque, is flanked by decorative Turkish tea vessels and is crested by an eagle finial. Guide price $1,000-$2,000

above: Accessory pieces from Jackson’s Moonwalker costume including: a black leather and gold metal belt, a gold metal necklace with matching purple and blue stones and matching bracelet and rectangular epaulets. The belt can be seen in the opening sequence of the film Moonwalker. Guide price $1,000-$1,500

above: The prop ‘scissorhand’ gloves that Johnny Depp wore in Tim Burton’s Edward Scissorhands. Stan Winston, the visual effects artist for the film, worked with Jackson on the 1997 short film Ghosts. Guide price $4,000-$6,000

above: A Victory tour jacket worn by Jackson at the Kansas City opening of the 1984 tour with the Jackson. It is currently on exhibit at the Los Angeles Grammy Museum. Guide price $2,000-$4,000

The sale also includes vintage video game machines, as well as Jackson’s collection of 18th- and 19th-century art. There are books about Disney, the Three Stooges, Peter Pan and Alfred Hitchcock, as well as a collection of black history books, including the autobiography of Malcolm X.

Then there is a selection of his own stage costumes, dating back from the days of the Jackson 5 through to the present. There is one of the fedoras he wore in the video for Billie Jean; a pair of trousers so studded with diamanté that they feel as heavy as chain mail; there are customized military jackets, featuring insignia surely acquired on his global travels – including badges from the Royal Air Force and the Thai Narcotics Bureau.
All Photographs Courtesy of Shaan Kokin/Julien’s Auctions

About the ranch:
The ranch opened as a private amusement park in 1988, with its own zoo and Ferris wheel, roller coaster and bumper cars. It was named after Peter Pan’s fantasy island where children never grow up, and for years children would arrive by the busload, invited to play freely in its grounds. But following the 2005 child molestation trial – which saw Jackson acquitted of all charges – the singer never returned to the 2,800-acre property in the Santa Ynez Valley, 130 miles west of Los Angeles. The ranch has recently been renamed Sycamore Valley Ranch.


Bidding is now closed for this auction.

Check out the best, weirdest and worst art inspired by Michael Jackson here.