During fashion week in Milan, edgy Dutch collage artist Tim Roeloffs (based in Berlin) and Versace debuted their collaboration of fashionable, wearable art which consisted of four beautiful dresses utilizing artist Roeloff’s style with Donatella’s designs and utilizing some of the famous Versace icons along with Berlin imagery.

Please note, the following text is from Wallpaper magazine:
Working with his own photographs and a pair of good ol’ fashioned scissors, Roeloffs’ three dimensional visual montages each depict an aspect of Berlin’s history and social landscape. For Versace, the artist created a total of twelve original works that were completed as recently as January this year.

Supplied with reference books by Versace, Roeloffs fused images from old ad campaigns with his trademark scenes of Berlin. The results range from people waiting for the tram dressed in Versace outfits from the 1980s, and figures lounging in a palatial interior filled with the label’s neo-classical furnishings and a fragmented skyline of Berlin in the background. ‘Donatella wanted to do something about Berlin because Gianni loved Berlin,’ Roeloffs said. Armed with a list of artists to vet, a design team from Versace was dispatched to the city, where they discovered the Berlin-based Roeloffs and his work.

‘I’ve been wearing the same clothes for the last 20 years, and I know nothing about fashion. I think they expected to meet someone in a suit. But I was very impressed with the result as I didn’t know how they planned to put photo-montages onto clothing. They did it very well and still maintained the dimensionality that’s in my work.’

Apart from specify that he work on both pink and yellow backgrounds, Versace gave Roeloffs the freedom to create what he liked. In addition to the Versace imagery, he was also given books relating to Gianni Versace’s personal interests, such as 1960s wallpaper, which inspired the floral motif that appears prominently in all four dresses. 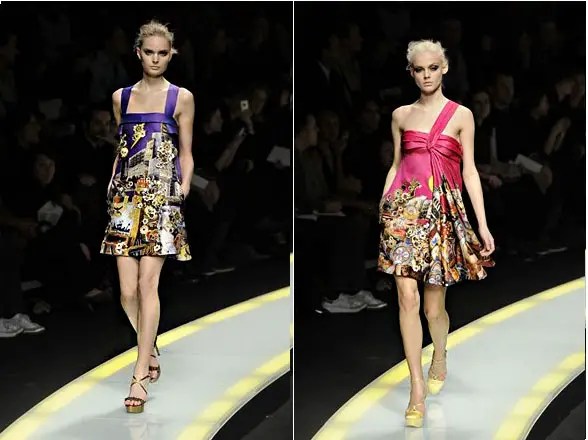 Fresh off the back of our ‘Artists Relations’ story in this month’s issue, the sheer unexpectedness of this collaboration is what we found the most intriguing. While Versace epitomizes Italian glamour, Roeloffs is a true modern bohemian living in Prenzlauer Berg and exhibiting his work in the Tacheles, a bomb-damaged Jewish department store that is now a gallery run by an art collective in Berlin’s Mitte district. The two could not belong to further ends of the spectrum.

When he attended last week’s Versace show in Milan, Roeloffs readily admitted, “I arrived in such a chaos by train because I brought my two dogs, three kids and my wife with me. Of course, there was a limousine to pick us up and it was really like coming from the gutter to being at their level.”

Here are some of Tim’s three dimensional collages that he created for the collection: Below are a few more examples of Tim’s work: