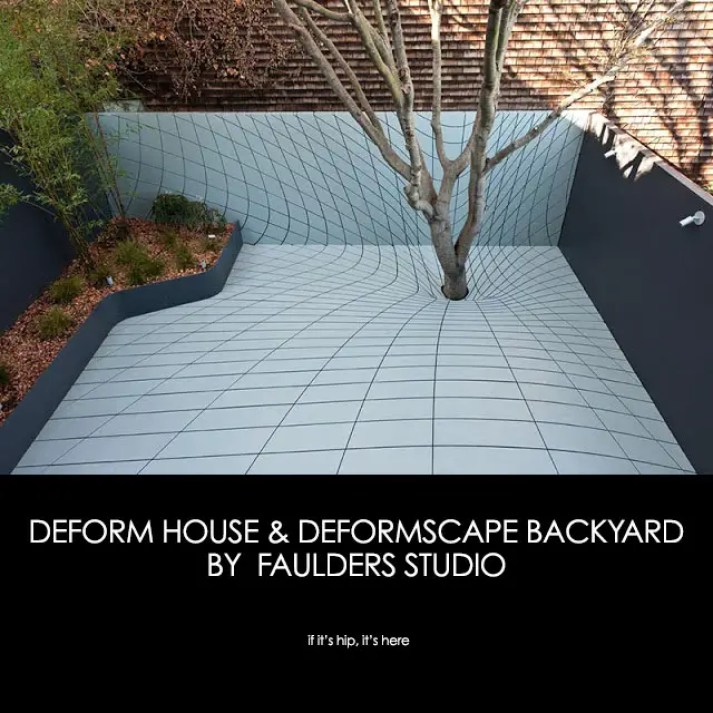 Five years ago, architect Thomas Faulder was hired by Jeff Dauber to transform his Potrero Hills home into a living residence/art gallery space. The result was Faulder Studio’s “Deform House”. The third-level addition, which was approximately 1,200 sq. ft., was constrained by existing structural walls and neighboring structures. With the need to maximize vertical wall surfaces for art, the design emphasized the ceiling plane with a pattern of optically shifting grooves. Sheathing the entire top floor ceiling and rear wall, this lining unifies the spaces and is in contrast with the architectural neutrality of the smooth walls. The entry gate, perfect for an Apple geek like Dauber, is perforated with a security warning written in binary code text: The door as it appears at night: But last year, the backyard got a new look as well. A dizzying plywood floor that transformed the 550 square foot backyard into a Tron-like illusory vortex. Though the surface of the San Francisco backyard that Faulders created for Jeff, a senior Apple exec, appears to bend and dip toward the Japanese maple tree, it is actually a flat horizontal plane made up of individual plywood tiles. The outdoor extension, called “deformscape” to the private dwelling is situated in the tightly packed urban neighborhood. The limited space outdoor sculpture garden inherits a large tree, and uses this sole arboreal presence to establish a gravitational pattern of grooves that are focused towards the tree’s centroid. What seem to be painted black lines are, in reality, gaps: the tiles sit atop industrial-fiberglass grating that allows rainwater to drain through to the tree’s roots. all images courtesy of Faulders Studio and a special thanks to Metropolis Magazine for some additional info.

About Thom Faulders:
Architect Thom Faulders, founder of Faulders Studio, creates client-based projects at a wide array of building scales, as well as hypothetical architectural proposals and speculative exhibitions that explore interfaces between space, perception, and context. The office situates the practice of architecture within a broader context of performative research and material investigations that negotiate dynamic relationships between users and environments.

In combination with practice, Thom Faulders is an Associate Professor in Architecture at CCA/California College of the Arts in San Francisco. He has previously taught at UC Berkeley College of Environmental Design, as Visiting Studio Critic at the Royal Institute of Technology in Stockholm, Sweden, and in numerous workshops addressing issues in contemporary architecture, including the CCA 333 Program and the SCI-Arc 2+2+2 Summer Graduate Program. He has been a design jury critic at many institutions, including UCLA, Penn Design, University of Toronto, Columbia, Cranbrook, Harvard, and SCI-Arc.

Many of the wonderful photos in this post are courtesy of Theodor Rzad, see more of his beautiful architectural photography here: Images © DIGITED IMAGE COMPANY

Get a look at Casa Pi, the first All Aluminum Prefab Home