` Urban Concrete Cuckoo Blocks by Guido Zimmermann - If It's Hip, It's Here
Skip to content If It’s Hip, It’s Here has long been a fan of modern cuckoo clocks as is evident by previous posts beginning with our first way back in 2007, then one on Italy’s Diamantini and Domeniconi Cuckoo Clocks and finally the beautiful handmade Pedro Mealha Cuckoo Clocks. Now we bring you sculptural concrete These beautiful Cuckoo Blocks by artist and muralist Guido Zimmermann are wall-mounted sculptures that just happen to tell time. A modern architectural take on Germany’s traditional Black Forest cuckoo clock, Guido Zimmerman’s are sculptural concrete clocks made in the likeness of existing Brutalist buildings in Europe, such as the 1972 Mainfeld Estate in Frankfurt,  Marcel Breuer’s Hotel la Flaine in Switzerland and London’s Glenkerry House by Ernö Goldfinger.

“I tend to be interested in the architecture that others find ugly. And as cuckoo clocks, the buildings must of course also offer a certain contrast to the Black Forest.” Zimmerman told Florian Heilmeyer for Stylepark.

Berlin Cuckoo Block
Zimmerman’s “Berlin Edition” of the Cuckoo are five structurally identical apartment blocks with small balconies and the cuckoo bird coming out of the front door. “The Berlin blocks were an experiment.” says Zimmermann. “I wanted to finally get away from the highly complex individual works. Glenkerry House, for example, even has lighting, and it takes a few days to build something like that.” For his “Berlin Edition” he uses Chinese cuckoo clocks with a plastic casing and electronic movement. “They are more flexible to fit, require less maintenance and are also cheaper.”

Guido explains on his site:
“Two aspects have a special significance here: buildings with a striking history and architectural value, as well as living in social flashpoints. Both are connected to the blocky, massive concrete construction.

The classic cuckoo clock is a symbol for prosperity in the middle class and is considered a kind of luxury for the home. The updated version, a prefabricated panel construction (“plattenbau”), reveals today’s urban and social life in residential blocks.

The second aspect of “Cuckoo Blocks” is no less interesting. For example, the “Glenkerry House” by Ernő Goldfinger, built in the striking style of brutalism, was once accommodation for average citizens. Today it offers “hip” and hardly affordable living in London.

The hotel “La Flaine” by Bauhaus architect Marcel Breuer, is a beautiful architectural example, but is an eyesore as this huge hotel complex is located in the middle of the French Alps.”

The Cuckoo Blocks are available for purchase. Contact the artist at [email protected] for prices The cuckoo clock series has been extended by Zimmermann with birdhouses for native songbirds. The prototype, a model of a social housing building from Catania/Sicily, was quickly inhabited by a pair of titmice. 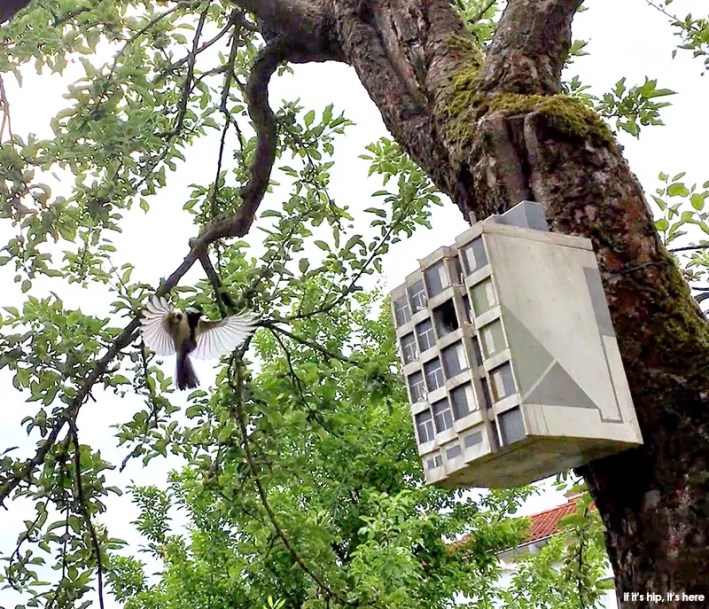 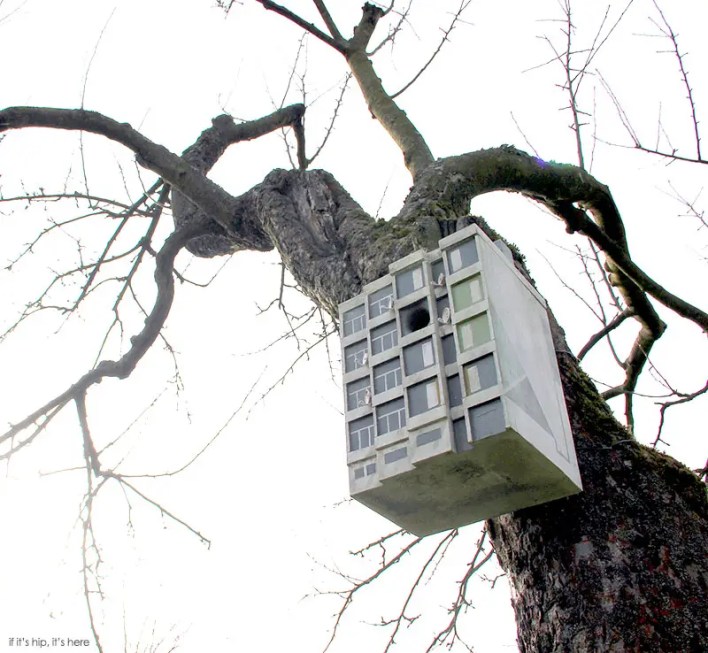 The three nondescript birdhouses next door remained uninhabited. Perhaps it was the small satellite dishes which convinced the birds of the “social bird housing”.

About the artist:
Guido Zimmermann’s works remind us that art does not just belong to the museum but also into public spaces. He is one of the few artists to have recognised that the architectural cityscape can play an important cultural role. The Frankfurt artist’s canvases are big urban walls and anything else that can be painted on. This way, Europe’s metropolises turn into tremendous open-air galleries. He has been involved in the street art project “The Museum on the Street” for a while now that promotes the concept of more art on the home fronts in the Rhein-Main region.

The graffitist and painter has found a fascinating form to create modern masterpieces that are simultaneously entertaining and thought-provoking. He does not limit himself to one particular style or medium. He paints canvasses, carries out gigantic murals and even creates sculptures time and again.

Zimmermann began studying art in 1993, not at university, but on Frankfurt’s streets. He has been interested in the figurative, something quite unusual for the graffiti scene, and experimented with it. A decade later, he completed his degree at the Academy of Visual Arts. This combination enabled the artist to refine his work and participate in major collaborations that have catapulted him to the top of the German street art scene.

His latest works not only demonstrate how two seemingly incompatible stylistic devices such as oil and spray paint complement each other, but also that new generations can rejoice opulent and museum-like art in unconventional settings.