` Christina West Unmet Series Evolves - If It's Hip, It's Here
Skip to content The ongoing Unmet series by sculptor Christina A. West is comprised of portrait busts that contradict the expectations of classical sculpture by removing a section of the form to reveal unexpected layers of color. We take a look at how these artworks of hers have evolved since she began creating the series in 2014, including her newest additions from 2021. 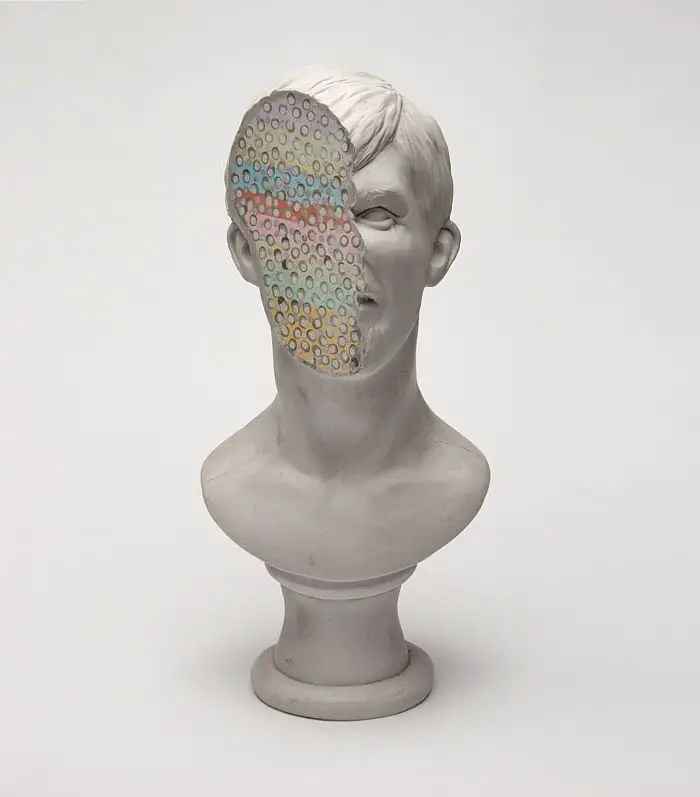 Christina West’s Unmet Series are figurative busts cast in gypsum cement (a plaster-like material), only parts of their heads or faces are sliced off, revealing unexpected colorful organic shapes and patterns. Partially obscuring their expressions, the extracted sections are meant to reveal the intimate and personal side of the subjects. Some of these strata strike a similarity to the cross sections of the brain as seen by Magnetic Resonance Imaging (MRI) machines, suggesting a greater psychologic complexity to the subjects of her pieces than the ones upon which they are based.

Others reveal simple patterns like stripes, perhaps suggesting the artist’s interpretation of their compartmentalized personalities or ordered thinking. 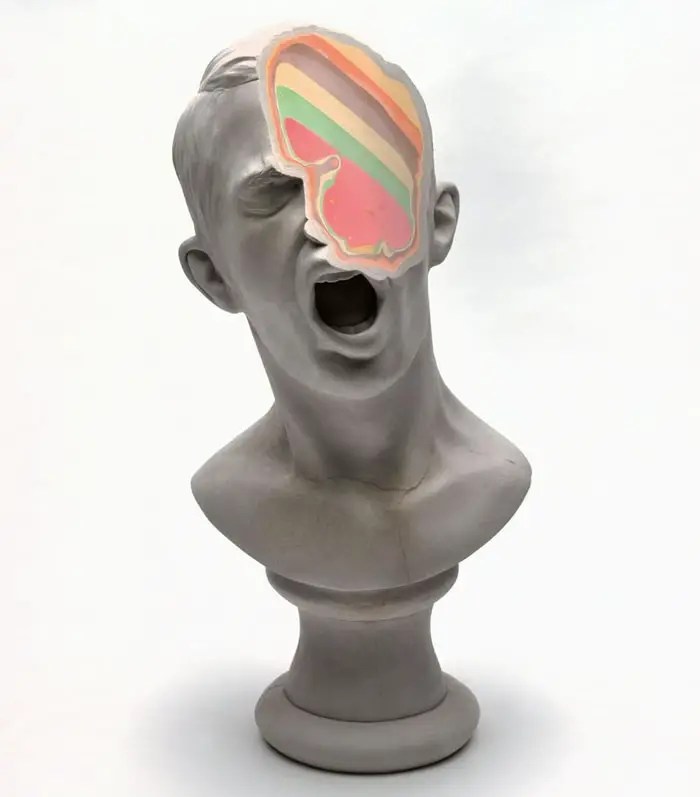 The busts in Christina A. West’s Unmet series have evolved since she first began making them in 2014. The early busts from the series are rendered in a darker plaster/gesso cement, but those dated 2017 to the present appear in white plaster, which conceptually puts them closer to the classical busts that inspired them.

The first of the series appears as the most literal interpretation of peering inside the complexities of, and mysteries within, one’s mind. The busts’s head is chopped off above the nose yet below the eyes, revealing what looks like a stylized brain.

The faces and expressions on the busts vary unlike the stoic expressions captured on ancient classic busts. They give much more away in terms of how the artist sees the subject. These are not only to be gazed upon, but to be gazed into.

In her 2017 work, the expressions took on less importance as a greater portion, and sometimes all, of their faces were removed in favor of revealing the interior. The colorful layers of pigmented plaster on these take up a larger surface area.

“The awkwardness and ambiguity of body language, the enigma of interiority, and the tension between a desire to connect and a discomfort in social situations, make the human figure an endlessly captivating subject for my sculpture, video, and installations. My work is rooted in figuration as a way to try to understand and connect with others, and is informed by contemporary art criticism and social theory about the gaze as a way to call out dynamics and politics that complicate the act of looking. Broadly speaking, addressing the gaze allows me to reflect on my relationships to others and consider what those dynamics can reveal about how we understand ourselves and others.” –  Christina A. West

Her most recent additions to the series are a departure from the previous and feature the artist’s own family members; her parents, her grandparents and her brother. Help with casting these came from the artist’s summer studio assistant and Georgia Statue University Ceramics graduate, Bethany Grabert (@theresebee)

Busts Unmet #4 – #8 (2021) take a new and different approach to its excavated sections. In these busts, there’s more attention paid to the carving ‘process’ than the result. As opposed to a slice revealing the interior, these busts expose textural, chunkier sections of color, a stark juxtaposition to the slick and clean treatment of the colored portions in the earlier works. We are looking forward to see where this talented sculptor is going to take these next.

Christina A. West is a sculptor and installation artist who has extensively exhibited her work across the country in venues such as the Mattress Factory (Pittsburgh), The Everson Museum of Art (Syracuse, NY), Hallwalls Contemporary Arts Center (Buffalo, NY), Plug Projects (Kansas City, MO), and Atlanta Contemporary (Atlanta, GA). Additionally, West’s work has been supported by a grants and fellowships from the New York Foundation for the Arts, The Archie Bray Foundation for Ceramic Arts, the National Council on Education in the Ceramic Arts, and the Virginia Groot Foundation. West earned her MFA from Alfred University (Alfred, NY) in 2006 and currently lives in Atlanta where she is an Associate Professor of Ceramics and Three-Dimensional Studies in the Ernest G. Welch School of Art & Design at Georgia State University.

images courtesy and © of the artist and her instagram feed