` In Honor of Thanksgiving, Art Inspired by the Wishbone
Skip to content 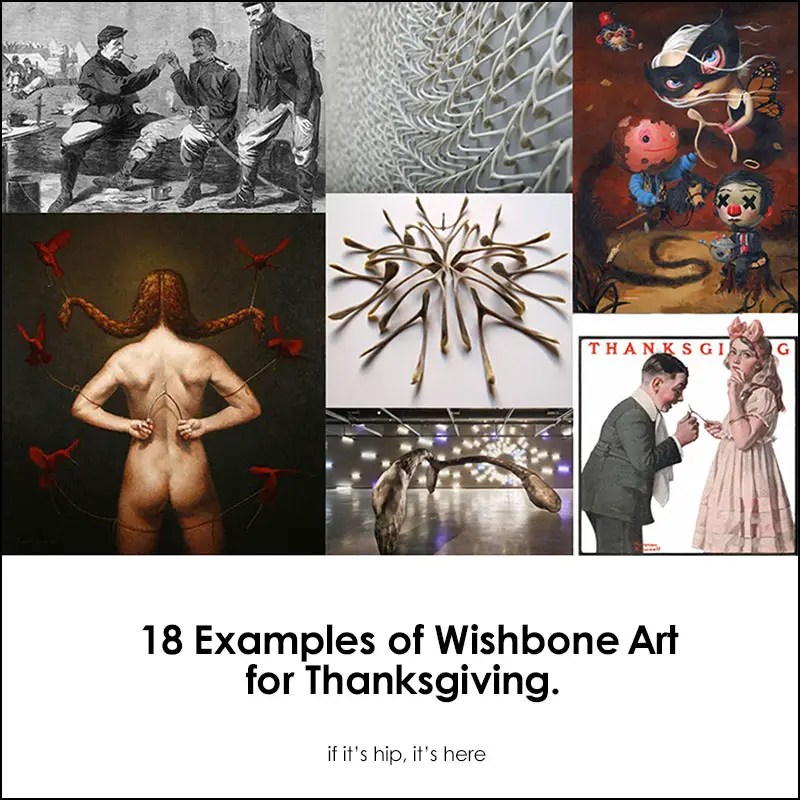 The most common belief is that the tradition of breaking the wishbone at Thanksgiving began with the ancient Etruscans and Romans who dried chicken wishbones and touched them as they made a wish. Lacking enough bones to go around the Romans fought over them – breaking them in the process. The Romans were said to have later introduced the practice into Great Britain.

Art Inspired By The Wishbone For more than two centuries, wishes were made on these unbroken clavicles. It was not until later that the expression “lucky break” was applied to the person winning the larger half in a wishbone tug-of-war. The person with the larger end of the bone would have his wish granted. In some places of the world, guinea fowl, geese, and turkey have replaced the hen, most likely for practical reasons. above: The furcula, commonly called a wishbone, is the forked, flexible bone in a bird’s breast

In honor of Thanksgiving, I have culled some interesting pieces of art which feature, or were inspired by, the wishbone. The 18 works I’ve chosen include sculptures, installations, paintings, drawings, typefaces and a video I found to be of interest – the oldest piece dating back to 1864.

Works of Art Inspired By The Wishbone

The illustration by Winslow Homer below is from the December 3, 1864 edition of Harper’s Weekly: Norman Rockwell‘s image of children pulling at the wishbone was on the cover of the 1921 issue of The Country Gentleman, the Saturday Evening Post‘s sister publication: BROOD is an installation by artist Kate MccGwire in which she arranged hundreds, if not thousands of wishbones, (photos by Jonty Wilde): Arthur Ganson is a renowned kinetic sculptor. He makes mechanical art demonstrations and moving artworks. His construction in the video below is a set of wire gears tethered to a chicken’s wishbone, equipped with miniature spikes and made to “walk” back and forth along a miniature roadway.

You can watch Arthur Ganson discussing his moving sculptures at TED here. Wishbone by artist Mark Handforth is a 7-½ foot tall aluminum sculpture (shown here on display at MOCA North Miami in 2010). Handforth digitally enlarged an image of a chicken wishbone to produce the massive sculpture: Cass Samms‘ Furcula, 2011 is four stylized bronze wishbone pieces which interconnect with one another creating an interactive space: The sculpture, oxidized in the photo below, is approximately 1.6m wide, 2.7m long and 1m high and sits on the edge of the rocks overlooking the beach and river crossing. Furculae is a collection of artfully composed wishbones by artist/Photographer Jamie Newton of Concrete Wheels: Christina Donato‘s Wishbone sculpture is made of Bloodwood and sterling silver: Artist Charles Price has both sculpted and painted a series of wishbones: Lucky Seven is a wishbone pinwheel by artist  Janelle Iglesias: Wishbones are ‘en vogue’ in terms of decorative objects and jewelry. There are several wishbone prints, paintings, charms, objet d’arts and more available to purchase on etsy and in many online stores. Happy Thanksgiving. I hope you get the larger end of the wishbone.