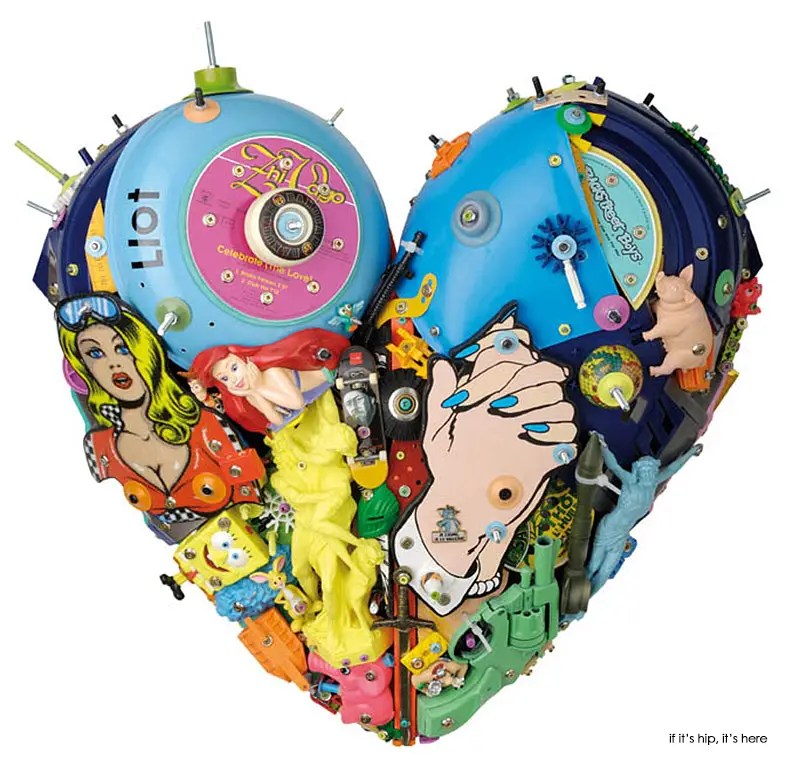 Paris based artist Éric Liot combines items archetypal of our consumer based society with objects and fragments from pop culture. Pieces of film, advertisements, toys, comics and anime are assembled or collaged to ultimately represent a colorful, decadent society, delusional in its mad self-celebration.

These hearts are only a small portion of the artist’s work.

Liot initially mills out the forms he needs, like wooden puzzle pieces, then he pastes poster fragments onto them, creating from them actual objects in ready-made style or just painting them with acrylic colors. The results are Liot’s characteristic collages, which, while somewhat critical of consumerism, first and foremost seduce the observer with their charm and amalgamation of interesting contemporary pictures. (source: Galerie Raphael 12)

A large heart-shaped piece for the December 2010 show at Laurent Strouk in progress: And as shown at Gallerie Laurent Strouk: above photo by Marie Laborde for Galerie Laurent Strouk

Éric Liot was born the 25th of April 1964 in Caen (France). After school, he begins to study architecture, first in the Normandy, then in Paris, at the “Université de la Villette”. But he soon realizes that he feels no call at being an architect or even a student. He is weighed down by the narrowness of the academic education as well as by the cold and total anonymity of the Parisian big city jungle. He feels attracted by the faraway and undertakes important travels to Latin America, East and Central Africa as well as Asia. Each time when he comes back to Paris, the decision to be an artist seems clearer. He gives up university and works as a free lance designing posters and furniture. Little by little he realizes that his objects are more and more aesthetical and original, but less functional. The interiorization of this coincides with the real beginning of Liot?s artistic career. First exhibitions soon follow and so the public success. Many solo exhibitions, fair participations, catalogs and articles relate Liot’s quick upcoming. Now he has won fame on the Parisian art scene and begins to make a name of himself also abroad, out of the French metropolis. (courtesy of Galerie Raphael 12)

Video of Liot in his studio by Director/ Cameraman Victor Lazaro

At present Liot is showing his work at the Fabien Castanier Gallery through March 4th, 2012 in Drill Baby Drill, a show with Michael Kalish.

New One of A Kind Snow Globes From Martin & Muñoz