` Paintings by Actress Jemima Kirke, Jessa on GIRLS - If It's Hip, It's Here
Skip to content 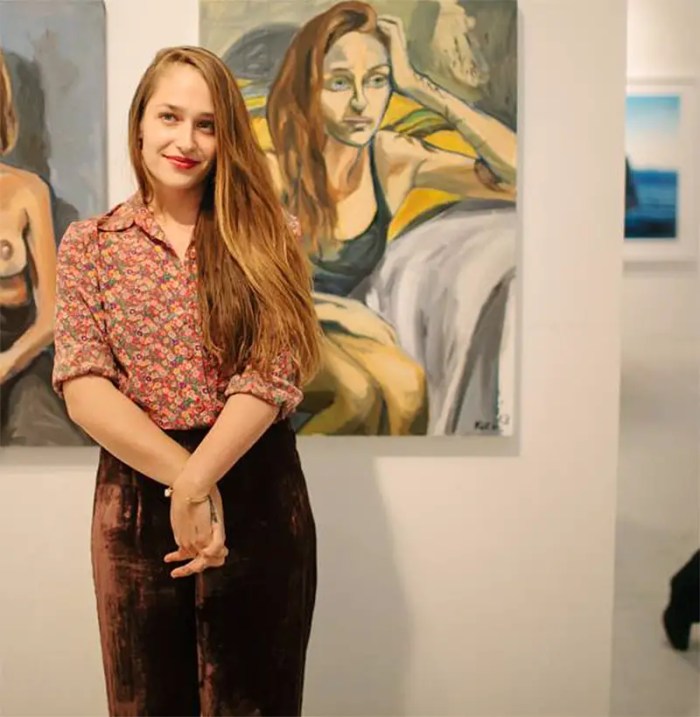 London-born actress Jemima Kirke, who you may know as the selfish, self-destructive but likeable Jessa on the HBO series GIRLS, also happens to be a talented fine artist..

The 27 year old, who was born cool with a drummer as a father and a mother who owns a vintage boutique, received a BFA in painting from the reputable RISD in 2008 and considers being a fine artist as her real work.

Now living and painting in New York, Jemima’s oil paintings and watercolors are a series of portraits (some friends, some of herself and mostly of women) which, not unlike her own character in GIRLS, embody a certain vulnerability combined with a sense of aloofness.

The portraits, which are all unapologetically brave, are not flattering per se, but instead imperfect and provocative. With a style reminiscent of the wonderful portraiture of Alice Neel and David Tomb, Jemima introduces us to both the sitter’s external appearance while simultaneously evoking their inner individuality. 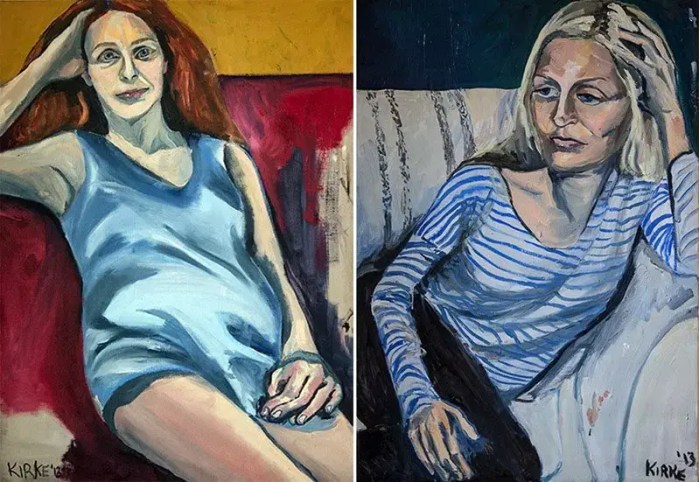 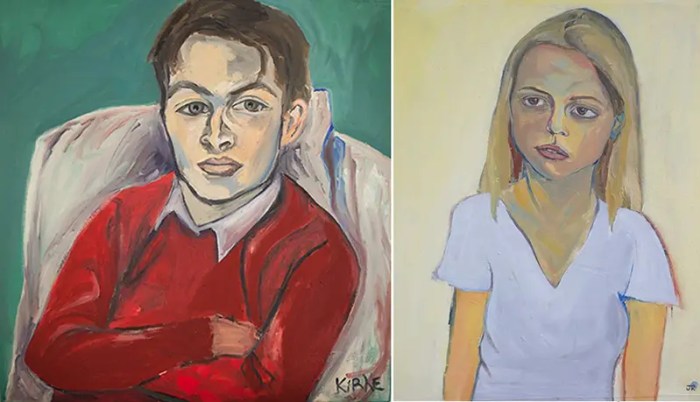 above left: Noah; above right: Katy 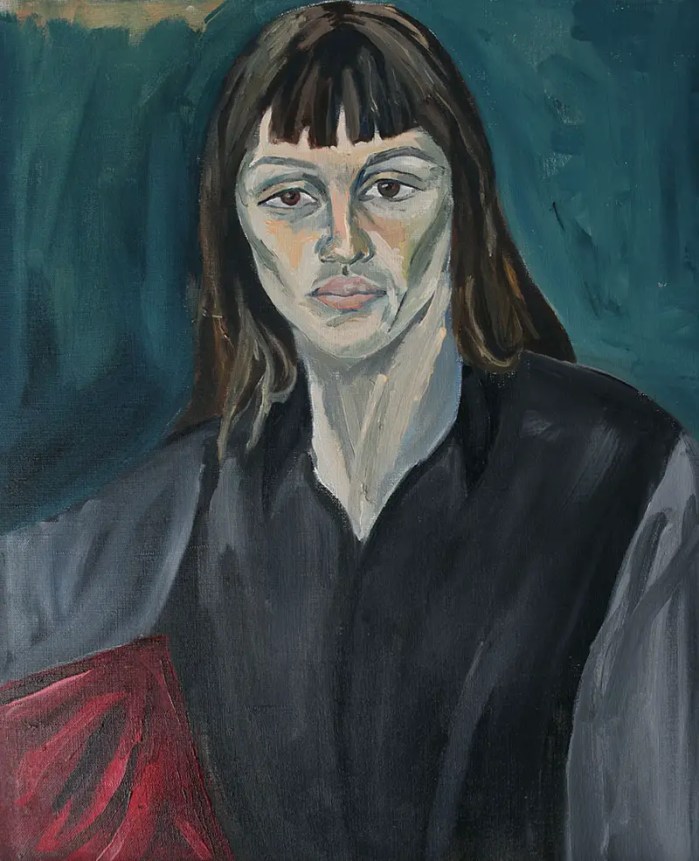 above left: Elaine; above right: Gideon above left: Francesca; above right: Elissa 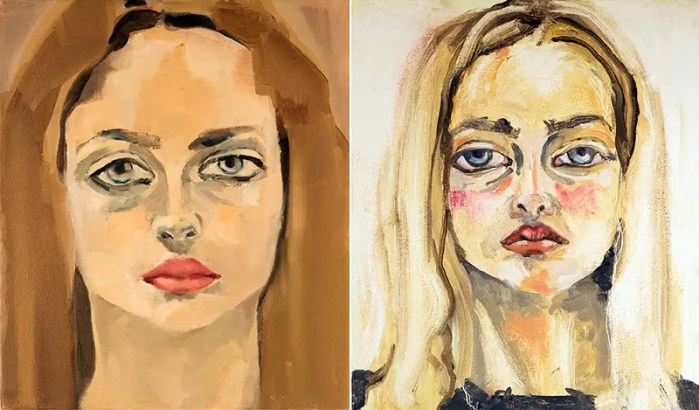 above: two untitled Self-portraits, both done in 2006

Jemima has had her work featured in a solo show at San Francisco’s Fouladi Projects, featuring her portraits of women, in March, 2014

About (from her website):
Jemima Kirke was born in London in 1985. She received her BFA in painting from the Rhode Island School of Design in 2008. She currently resides and works in Brooklyn, NY. 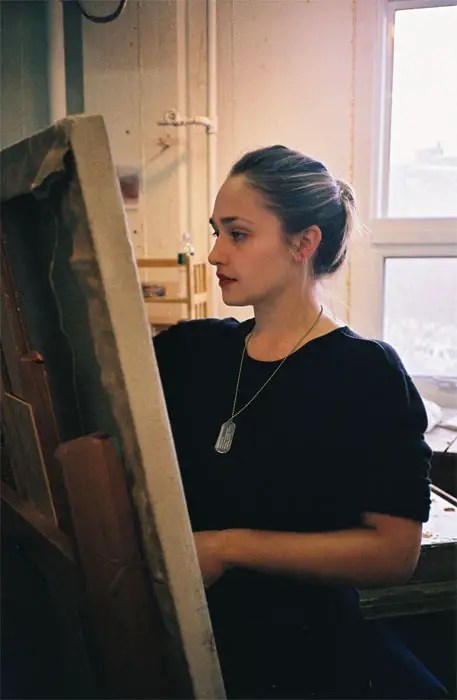 Skylight Projects is pleased to present A Brief History, an exhibition of new oil paintings and multimedia drawing and collage by Jemima Kirke (b. 1985, London, UK). Kirke was raised in New York City and received her BFA in Painting from RISD in 2008. Inverting the tradition of oil portraiture, Kirke explores the multi-faceted layers of character within each of the models and friends who sit for. As viewers we are made distinctly aware of the painter’s hand and controlling gaze—we are left to confront uncomfortable truths about ourselves as voyeurs as well as about the masks and performances we engage in daily.

Drawing on influences as varied as Edouard Manet and Lucian Freud, Kirke stays firmly grounded in a painterly tradition aiming to dissect her own gaze and her models own representations of themselves while underlining the staged relationship that is created with her subject within the studio. Kirke works quickly, and without preliminary sketches, allowing the painting to unfold in real time—her canvas yields an image of this live experience between artist and subject.

These people become both familiar and unclear—women are both beautiful and highly disturbing, strangers and close acquaintances are treated with equal care and intimacy as the artist manipulates and distorts them. By turns both heart-breakingly intimate and ultimately entirely distant, Kirke flees from obvious representations of her subject matter to focus on an underlying darkness and the interplay of pathology that exists between artist and the person studied. Her practice highlights the uncanny moment of fusion between the sitter’s projected identity and the internal character that the artist imposes upon her subject. The strange tension between what we reveal and what we hide flits across the faces of women turning them into ghoulish figures one minute, and provocative sirens the next; young children are in the same instant, frighteningly old, terrifyingly grotesque and tantalizingly naïve.

A Brief History presents us with the short version of a long story that spans various contexts and generations. We are left wondering not so much about who these people are, but rather how and why Kirke has brought them together as a beautiful and twisted family overrun with ghosts and memories. This collection of paintings and collages grasps for insight into a moment of time shared between artist and subject—a ripe moment, a rich palimpsest of imagery and stories that speaks to the depth and length of our personal histories and the stranger than fiction characters we each embody.

See more of her work here

images are all courtesy of Jemima Kirke’s old – and no longer existing- website at jkirke.com

One of A Kind Summerland Art Bongs