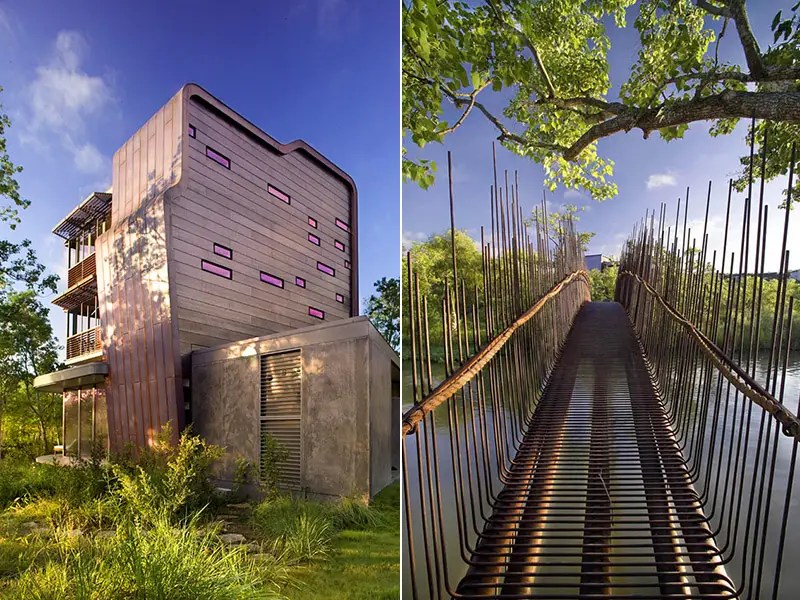 Miró Rivera Architects, whose latest project is the Circuit of The Americas, the first purpose-built Formula 1 Grand Prix™ facility in the United States, is no stranger to fabulous residential design as well. Miró Rivera Architects’ Guest House is a wild-looking waterfront home is situated on a two-acre peninsula and is surrounded by a natural landscape that includes reed-covered wetlands, which serve as a migratory stop for egrets, cranes and swans. A stunning pedestrian bridge was added to connect this Guest House to the main property (images of the bridge follow those of the house). The development of the project utilized a meticulous analysis of the existing vegetation and wild life to implement a ten year plan that will eliminate invasive plants, reintroduce native plants, and restore and increase the existing wetlands. To limit its ecological impact, the Guest House was conceived with a minimal footprint as a light vertical structure consisting of three floors. The ground floor with its kitchen, living and dining areas is completely open to a surrounding terrace separated only by floor to ceiling glass. This sweeping covered deck appears to float above natural grade with native grasses coming to its edge. A glass box covered with shutters hovers above the first floor roof. It contains the master bedroom in the second level and two bedrooms in the third. The box is attached to a three-story volume that contains the stair, bathrooms and closets. This volume is defined by a ribbon-like edge that adjusts itself to the needs of the spaces inside. The shutters have adjustable slats and can be fully folded up to accommodate varying light conditions. In addition, the shutters provide protection for the house when it is not occupied. The steel windows of the cube are fully operable to encourage a greater interaction with the natural environment. The Spanish operable shutter system sits in front of a steel door and window system that dovetails into the structural steel frame, with 1/8″ tolerance over the three floors. Copper and paint-grip metal exterior cladding panels contrast with integrally-colored exterior plaster; the cantilevered poured-in-place deck completes the ensemble, and places the user in the natural environment. The graceful steel bridge allows access to the rest of the site across a lagoon. Located in a densely vegetated site in Lake Austin, this pedestrian bridge connects the main house in the property with a newly-constructed guest house. With a design inspired by the reeds and other native vegetation that cover the shores of the lake, this bridge is a light and maintenance-free structure integrated in its beautiful wetland setting. The bars/reeds intertwine at the abutments and “grow” over the bridge, camouflaging it and turning into a symbiotic, almost invisible link. The arch structure spans 100 feet with a main span of 80 feet. It is composed of five nested five inch diameter pipes that diverge gracefully between the spring-point of the main span and the abutment at the beginning of the bridge.

The pipes support 1/2” diameter bars which become both decking and guardrail with a simple field bend from horizontal to vertical. The irregular length and close spacing of the bars recall the native reeds of the site, and the thin profile of the superstructure is made thinner when viewed through the visual veil of the reeds.

The hand rail consists of a rope secured with steel wire rings to a 1×1 horizontal tube welded to the vertical bars. To further integrate the bridge in its natural setting the steel is left unfinished to weather, just like the rope handrail and the stone ramps.

Architectural plans for the Guest House: Most photos by Paul Finkel/Piston Design

The Haven Home and Boathouse are Sustainable and Spectacular.

Tiny Houses In Which To Hideaway North of Norway [30 Photos]