you are here: if it's hip, it's here » furniture » unusual furniture » When Computers And Classics Collide: Sebastian Brajkovic’s Lathe Furniture

Last Spring, Carpenters Workshop Gallery had a showing of Sebastian Brajkovic’s collection of work, entitled Lathe. The exhibit consisted of a series of several chairs and one aluminum table, all of which combine classic furniture design with computer inspired ‘stretching’ to create a modern interpretation of antique style furniture.

The work is so innovative and unusual that one of the pieces from the exhibition, Lathe VIII, has even been entered into the prestigious permanent collection of the Victoria and Albert Museum.

“They are called Lathe because of the apparent rotating effect of the design. In fact the word Lathe comes from the Latin word used to convey the idea of milk being stirred. My very first thought with making this design was actually a practical one. I wanted to create more space on a singular chair by “extruding” the seat’s surface area.” says Sebastian. 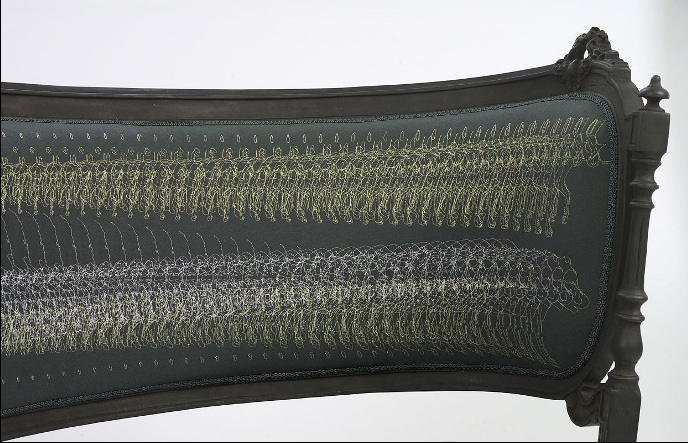 The artist continues “This extruding idea came from a Photoshop function where you can pick a row of pixels and extend them as long as you want. This modern computer method aided me to devise new ways of sketching as a contradictory partner in my design process. In this paradoxical sense, using antique forms was the next logical step.” 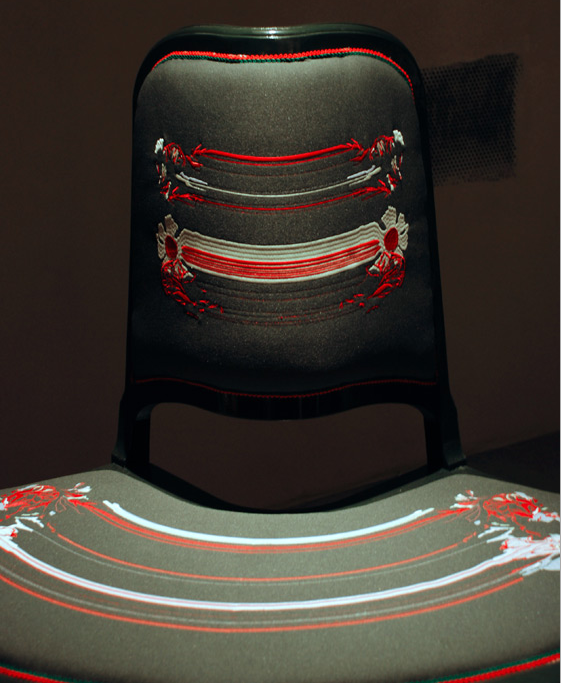 His artistic process starts by deconstructing historical pieces of furniture, in particular seventeenth-century chairs, then through a combination of wood carving, bronze casting and hand embroidering, he reconstructs an entirely new vision, as you can see from the pieces below. 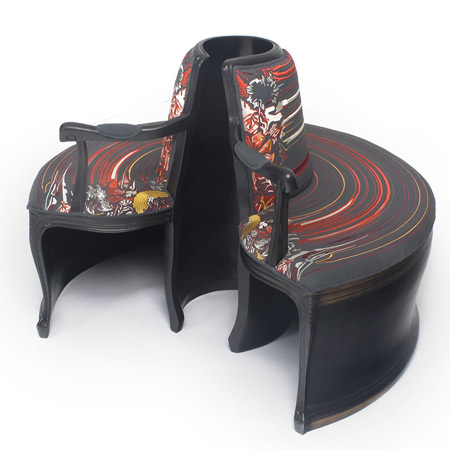 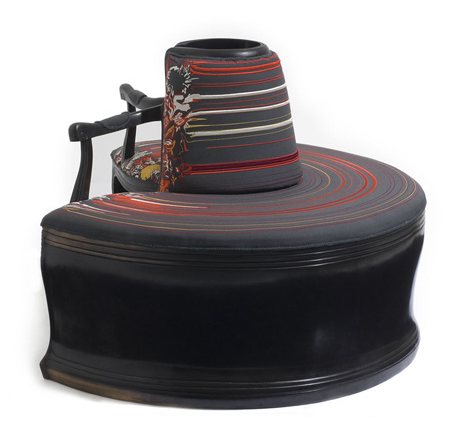 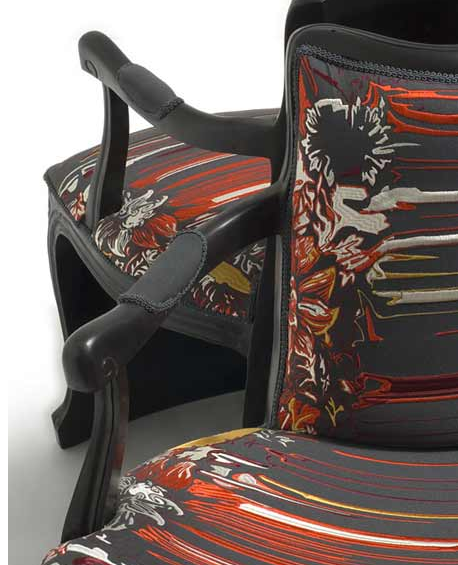 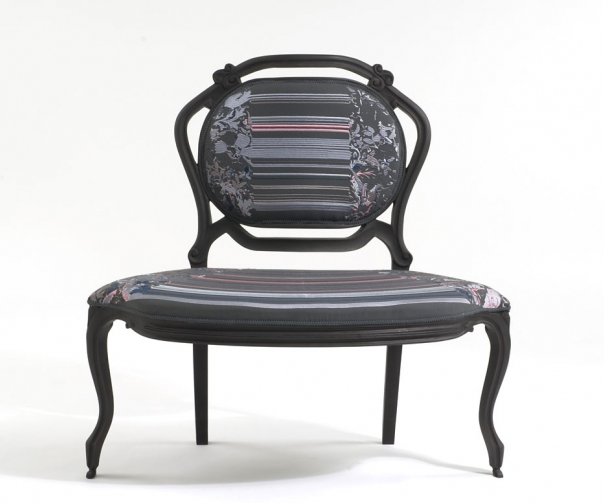 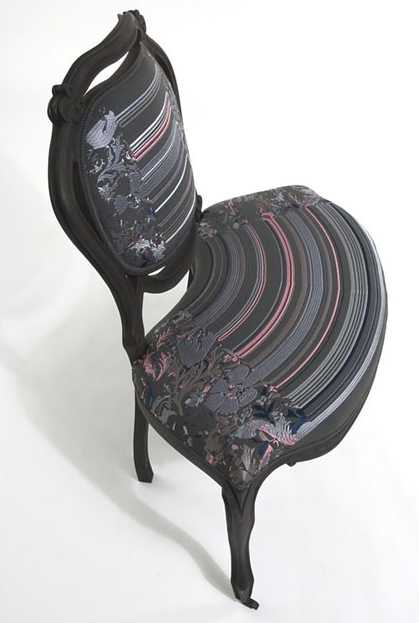 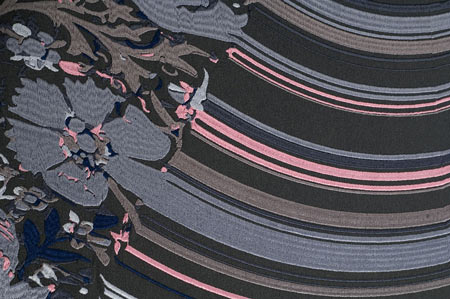 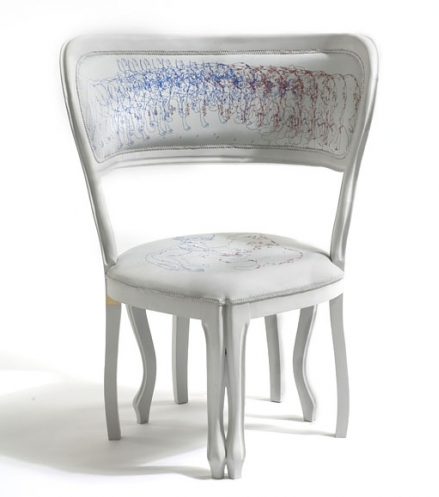 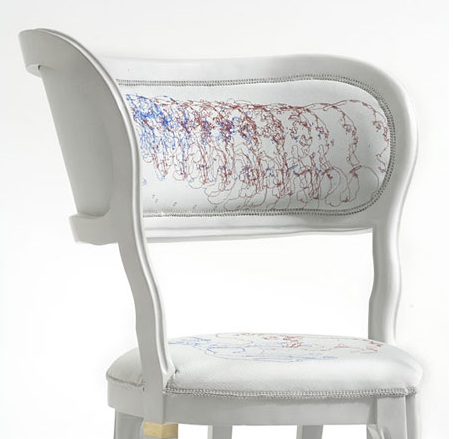 Usually the materials or forms I use are from products that already proved themselves as worthy. Like the lathe chair series for instance, the forms are used from old chairs, these old chairs lay easy on the eye because they are recognizable, in a way they are accepted. If I want to explain a chair that looks like its moving, it will explain itself better when you recognize the old and familiar chair in it. —- Sebastian Brajkovic 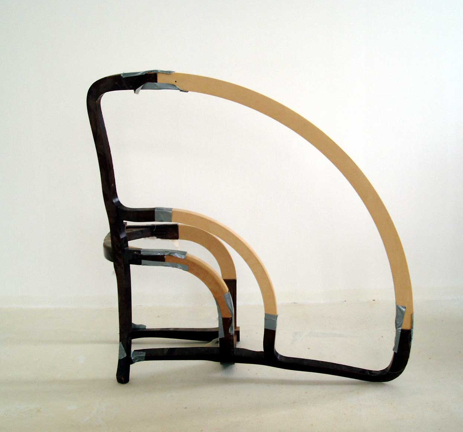 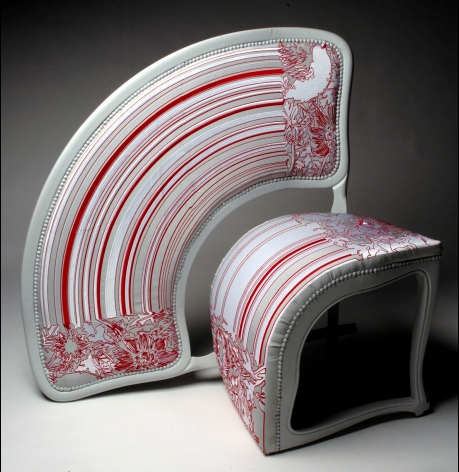 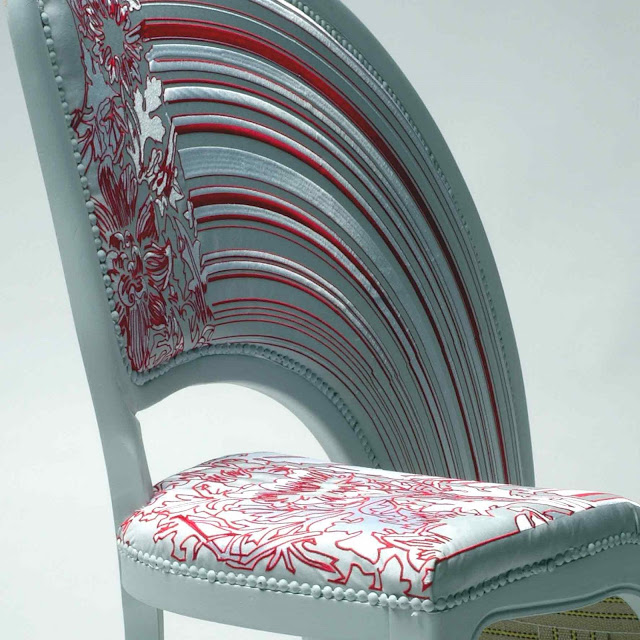 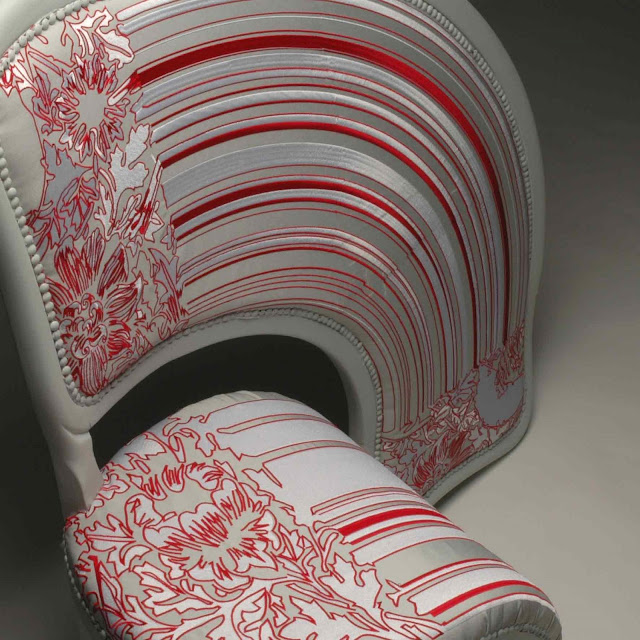 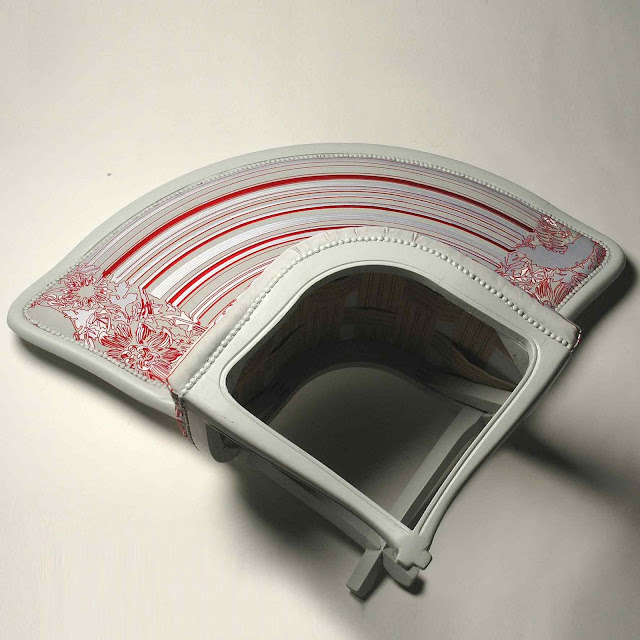 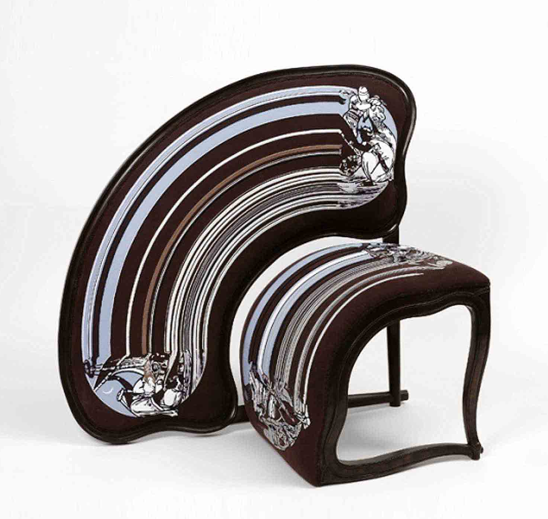 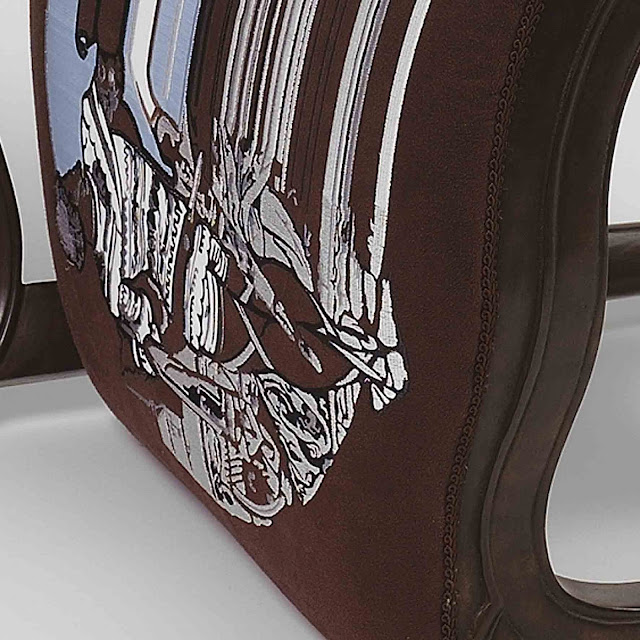 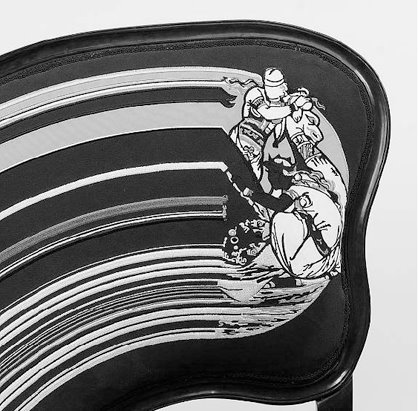 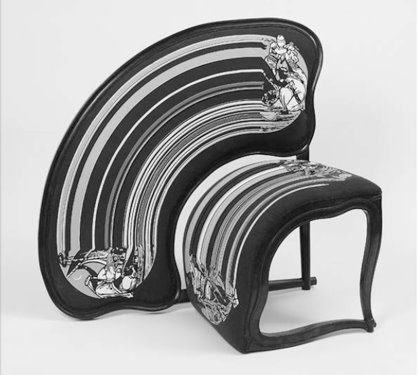 Lathe VIII (shown below) adopts the idea of the traditional love seat, which is created by connecting two baroque-style chairs by an extruded backrest. The elaborate embroidery on the upholstery of the backrest is a significant element of this work. The regular overlapping of the outline across the entire width of the backrest creates the impression of movement which is reminiscent of super slow-motion shots á la Matrix. Brajkovic accordingly seems to integrate the moment of morphing, the element of time as a fourth dimension, into the object. 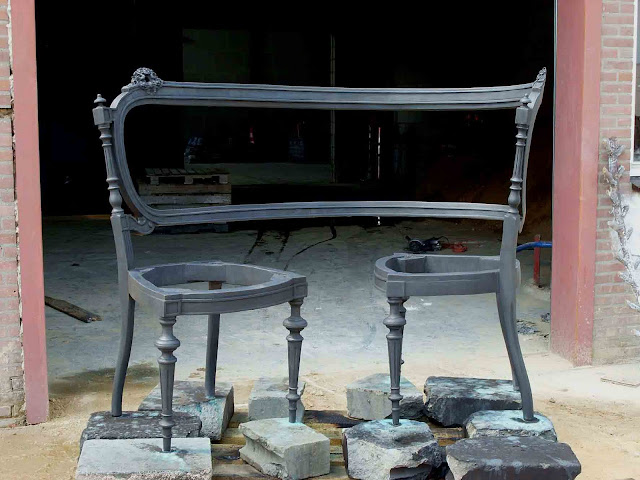 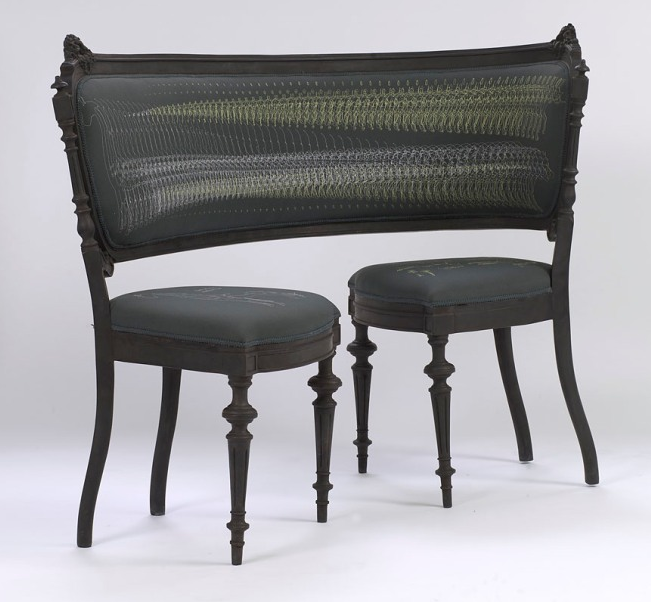 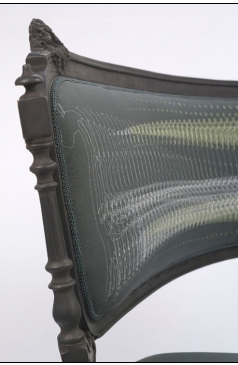 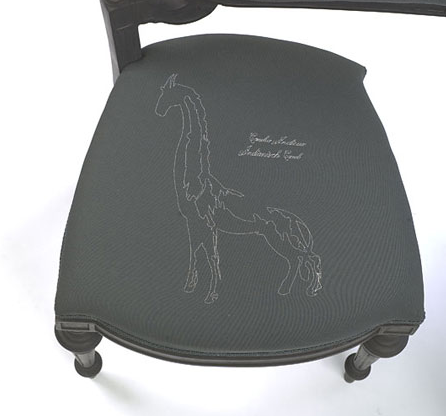 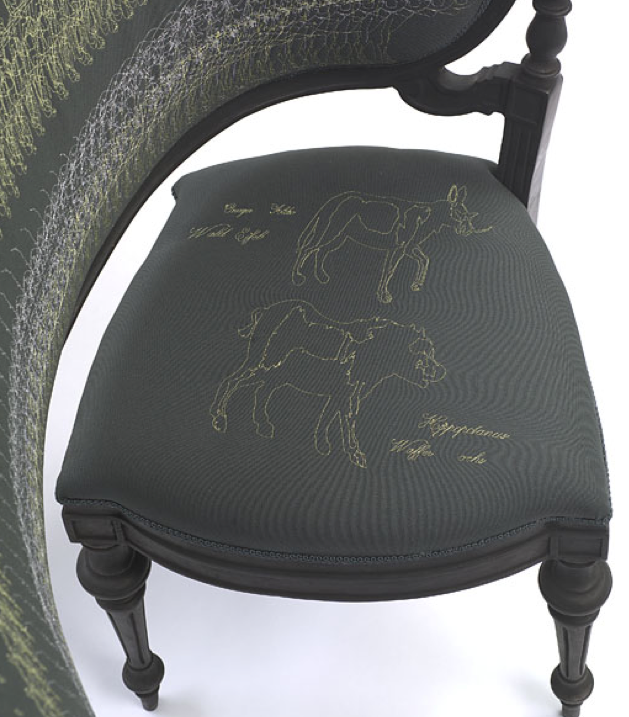 Made of aluminium, the Lathe Table is quite literally created by being turned on a real lathe. In this incarnation however, the chisel carves aluminum directly instead of the traditional wood. The evocative sense of movement is conveyed in the spinning lines of the quasi vortex, offering the past impression of a moment of great movement and now stillness. Inspired originally by a child’s spinning top, whizzing around at high speed, it has the same illusion that once at its optimal speed it is no longer moving but standing up straight. The highly polished surface is a product of the lathe turning technique which polishes as it carves the metal. He explains that whereas the Lathe Chairs are more like painting, in that modifications can be made during the production process, the Lathe Table is a one step process which is an honest and direct application of the Lathe concept. 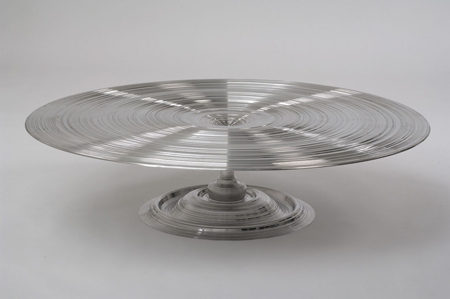 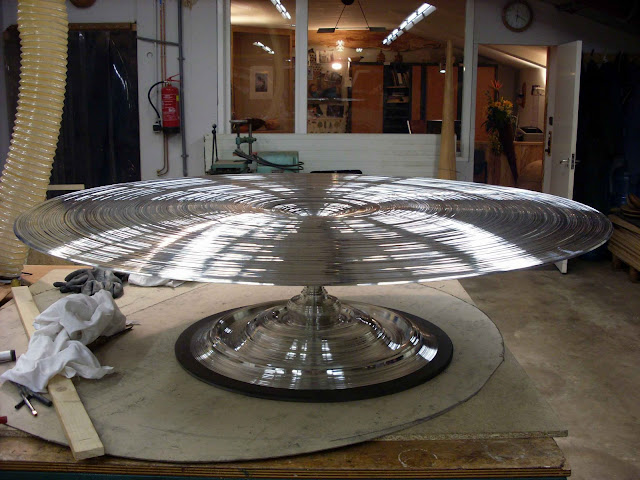 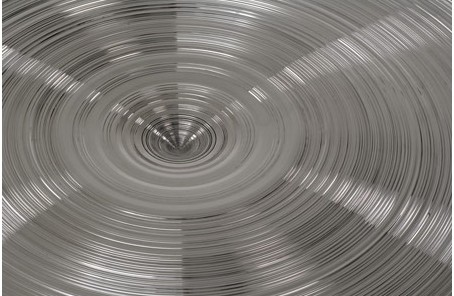 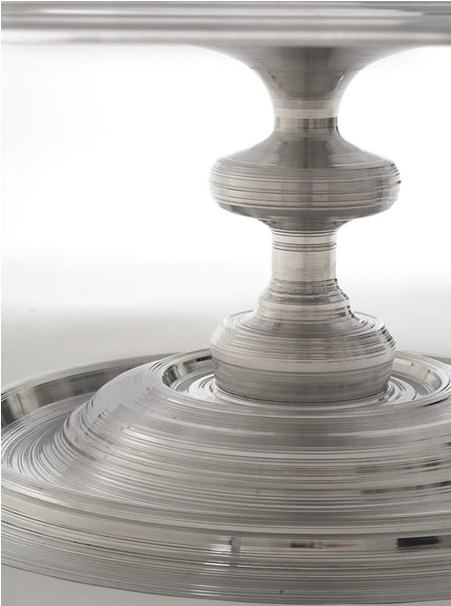 About the designer:
Sebastian Brajkovic was born 18th September 1975 in Amsterdam from a Dutch-Indonesian mother and a Croatian-Italian father.

After completing a course in cabinetmaking at school he applied for both the Rietveldt and Designacademy being torn between an art and design education. He chose the Designacademy with a view to make art that wanted to be design or visa versa. He studied under Gijs Bakker, Hella Jongerius and Jurgen Bey. He continues his studies in philosophy at the University of Utrecht. He carried out an invaluable internship at Jurgen Bey’s studio. In June 2006 Brajkovic graduated with the “Lathe Chairs” and “Home Grown” projects.

The above pieces, if not yet sold, are available for purchase from:
The Carpenters Workshop Gallery,
3 albemerale street, london w1s 4he

special thanks to Spazio Rossana Orlandi and Dezeen for some additional images.