The cult of VW Camper Van lovers, Hippie Microbus fanatics and all others who covet the iconic Volkswagen Bus from days gone by are going to be thrilled to hear that the bus is back. But this time it’s electric and it’s called the Volkswagen ID Buzz.

EXCITING 2021 Update: It’s been confirmed by Carsten Intra, head of Volkswagen’s commercial vehicle division, that the ID.Buzz will come to the U.S. in 2023 as a 2024 model, following the 2022 launch of the ID.Buzz in Europe. Here, the lineup will be somewhat reduced and more upscale. On August 19th, 2017 Volkswagen announced that they’re planning on selling a production version of this award-winning I.D. Buzz concept electric vehicle in 2022 for the United States, Europe and China assuming it will be ready by then. “For me, the I.D. Buzz concept is the most beautiful and most exciting electric car in the world,” said Dr. Herbert Diess, Chairman of the Board of Management for the Volkswagen brand, in Pebble Beach, Calif. “Our goal is clear: we want to make the fully electric, fully connected car a bestseller around the world. The iconic car of the electric age must be a Volkswagen.” Designed to recall the original Type 1 Microbus without mimicking it, the I.D. Buzz concept has won several awards in the months since it was revealed at the Detroit Auto Show. The front V in the bodywork calls back to the two-tone predecessor on the original Bus, but in the I.D. Buzz carries a light strip that surrounds the vehicle and gives it a unique visual signature. 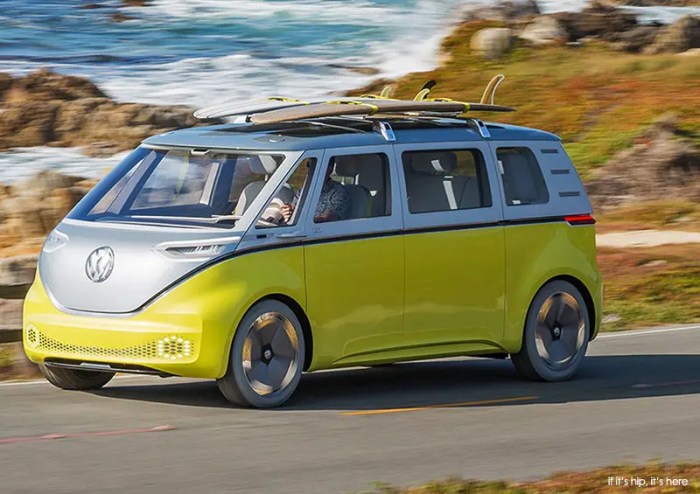 The LED headlights have hexagonal segments that act as “eyes” to communicate the vehicle’s status. With near-zero body overhangs and 22-inch wheels, the I.D. Buzz manages to look modern and timeless, one of the hallmarks of Volkswagen brand design. 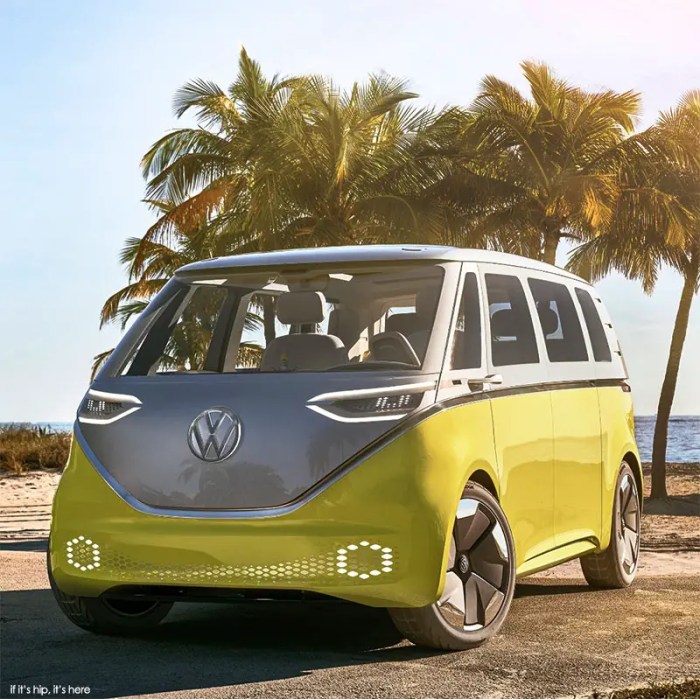 The first VW Bus sold in the United States in 1950 had all of 30 hp. The I.D. Buzz concept sports 369 hp from electric motors on each axle that also provide all wheel drive and the 111 kWh battery pack in the floor of the MEB chassis provide nearly 300 miles of estimated range. 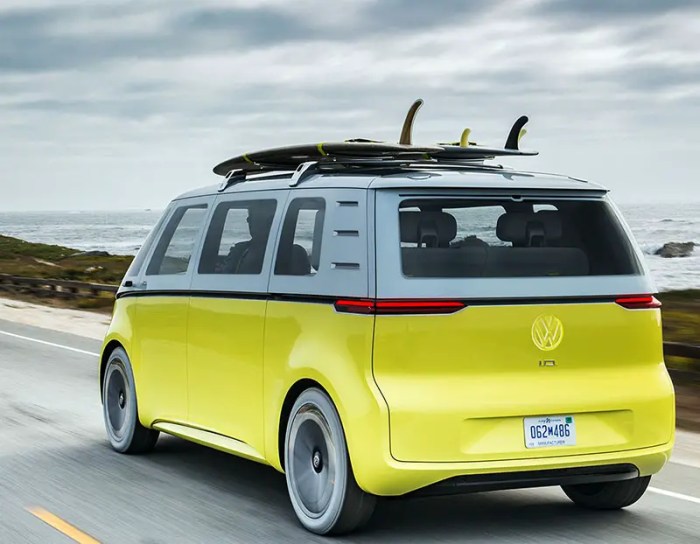 Using a VW fast-charge system, the it can recharge about 80 percent of its energy capacity in 30 minutes at 150 kW. 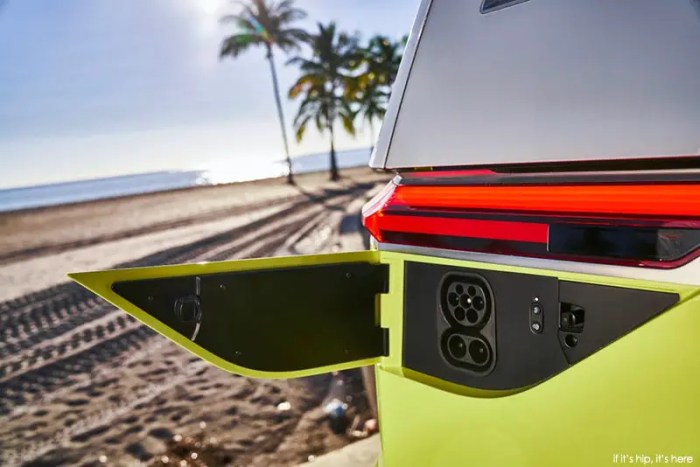 But just like the original Microbus, the design and engineering of the I.D. Buzz concept and MEB platform provides ample space for passengers or cargo, with an expansive view of the surroundings. It can seat eight people with ease, and hold up to 162.5 cubic feet of cargo when the seats are folded or removed – the space of a full-size SUV on the footprint of a typical mid-size SUV. There’s even a front trunk, just like the original VW Beetle. The I.D. Buzz concept also offers a preview of the type of autonomous technology that VW will develop for future models – namely its fully automated “I.D. Pilot” mode that could go into production by 2025. From the fold-away steering wheel and pop-up laser scanners in the roof to a heads-up display that integrates augmented reality, the I.D. Buzz does not lack for innovation. 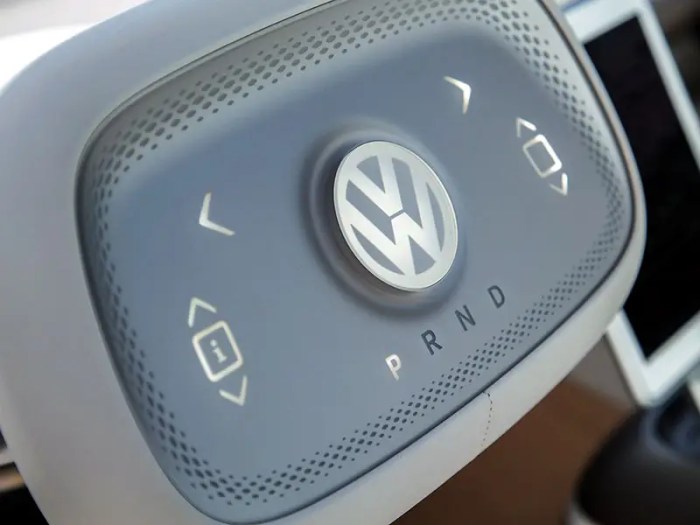 “The I.D. Buzz stands for the new Volkswagen,” says Diess. “We are fully committed to the future of mobility, and we want to reignite America’s love for VW.” Just like the concept car that was shown in Detroit, the production model will also have its batteries mounted in the vehicle floor. Because the electric drive components — electric motor, power electronics, and such —don’t take up much space, the vehicle has a long wheelbase with short overhangs, allowing for a massively spacious interior and great proportions. “The vehicle looks like a compact commercial van on the outside, even though it offers the generous interior space of a large SUV,” Diess explained. CEO of the North American Region, Volkswagen, Hinrich J. Woebcken added: “We are delighted that our parent company has taken the decision to produce the I.D. BUZZ. This vehicle is the perfect balance between emotion, usability and sustainability, while also showcasing our technological leadership. The high seating position, cargo capacity, overall versatility and all-wheel drive option packaged into such an appealing design is just what our customers want from us. And it’s the perfect fit for the zero-emissions American lifestyle.”

images and information courtesy of VW.com and Unnamed Project

The VanDutch 32 Is “Entry Level” To A Lifestyle Most Of Us Just Dream Of.

The Bugatti Veyron 16.4 Has A Luxury Safe To Match – And Other Bugatti Goodies.

Their Most Expensive &über Exclusive, The Lamborghini Reventón Roadster Unveiled