` Game of Thrones Rep The Realm - If It's Hip, It's Here
Skip to content Game of Thrones Rep The Realm is HBO’s seven-part collection inspired by the iconic series to pay homage to the urban streetwear community. The cable channel enlisted seven different top designers to create collections inspired by the cult favorite, with each new one being announced weekly. Here’s a look at the first four.

Game of Thrones Rep The Realm

With Game of Thrones’ season seven finally here, HBO® has announced ‘Rep the Realm,’ a seven-part collection inspired by the iconic series to pay homage to the urban streetwear community. ‘Rep the Realm’ brings together top designers to create limited-edition, micro-collections made up of apparel and accessories celebrating the series’ themes of power, reign, rise and fall.

“Game of Thrones has captivated audiences globally for the past six seasons, immersing us in a world we couldn’t wait to return to week in and week out,” said Lucinda Martinez, SVP, HBO Marketing. “In celebration of the seventh season, we are proud to partner with seven unique designers who are creating collectible pieces of clothing and accessories that build upon the creativity and ingenuity of this iconic series to take the themes off-screen and into streetwear.”

HBO enlisted the following seven streetwear designers, all of whom are diehard Game of Thrones fans, to bring Game of Thrones Rep The Realm to life: Carrots, Billionaire Boy’s Club, ALIFE, Dee & Ricky, 40s & Shorties, Koio, and V/SUAL who each created limited-edition pieces that embody Game of Thrones and its many motifs.

Anwar Carrots, of the menswear label Carrots, reveals his wife and collaborator, Stella Blu, first introduced him to the show. “We work from home,” he explains, “and while we work, we watch Game of Thrones.”

Blu, is the artist behind the Dany sketch featured on the back of the t-shirt the couple designed. Carrots says, “My wife feels a connection to Khaleesi, and how hard it is for her as a female artist in a male dominated business.” His own role in the “Rep the Realm” collaboration was to figure out design and placement. He went with his first instinct to keep it clean and simple: Dany on the back of a white t-shirt, and a the Game of Thrones logo discreetly placed on a pair of black shorts. It’s an outfit designed for those ready to channel their inner Khaleesi. Carrots personal favorite Dany moment? “I’m going to come clean: My favorite moment was when she met her man, Khal Drogo.” He adds, “When I saw that big dude kiss his girl like that, because he loved her… That was my favorite part. It felt the same for me and my wife.” 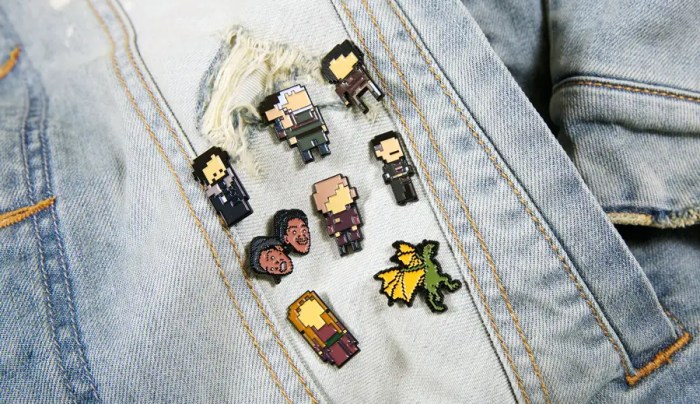 Ricky Jackson and his twin brother Dee are the creative minds behind the brand Dee & Ricky. The Game of Thrones fans put their skills to work reimagining some of their favorite players in the “great game” as pixelated pins: Arya, Tyrion, Cersei, Jon, Sansa, Littlefinger, The Hound, Drogon, and Hodor with Bran on his back. The pins are designed for versatility – add them to a baseball cap, purse, or suit lapel. The brothers want to use their pieces to get people talking. Ricky explains, “We’re into functional fashion and conversation pieces.” Each Game of Thrones pin depicts a distinct character. Like the show itself, the pins are designed to appeal to a mass audience and also serve as a way way to bring fans together and get them talking about their favorite parts of the show. For Ricky, it’s “the twists in characters, shock factor, and a mix of violence and politics” that keep him watching. 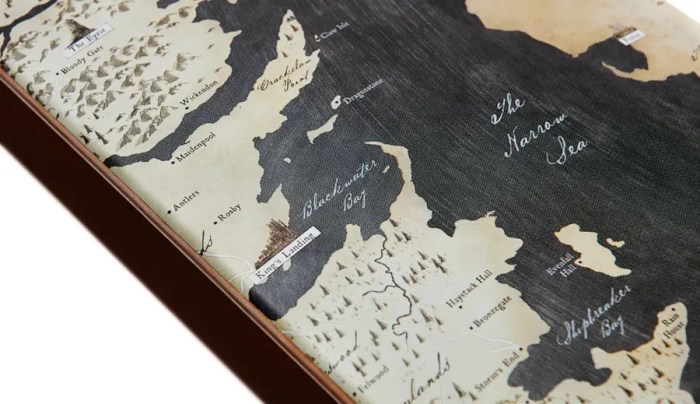 “I wanted to make a piece that speaks to hardcore Game of Thrones fans but also can reach someone who may not know a lot about the show,” Stephen Vanasco (aka Van Styles) of V/SUAL explained. He went back to his skateboard roots, creating a set of decks, which when placed side by side, form the iconic map of Westeros and Essos. 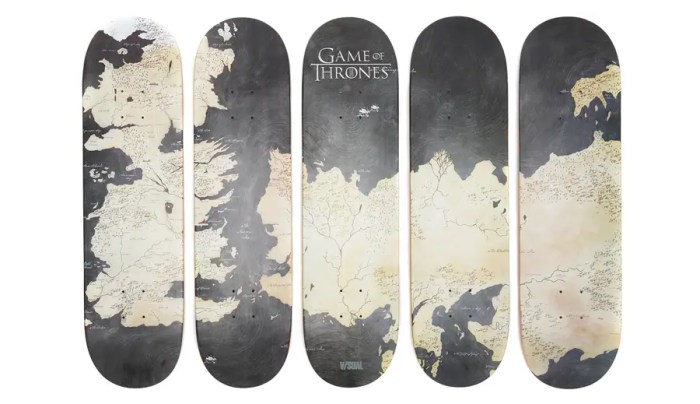 Styles implemented a process known as laser etching to create a unique piece for the Rep the Realm collaboration. As he described the effect, “If there are lines that resemble hills on the map, those get cut out so you can feel grooves across the board.” 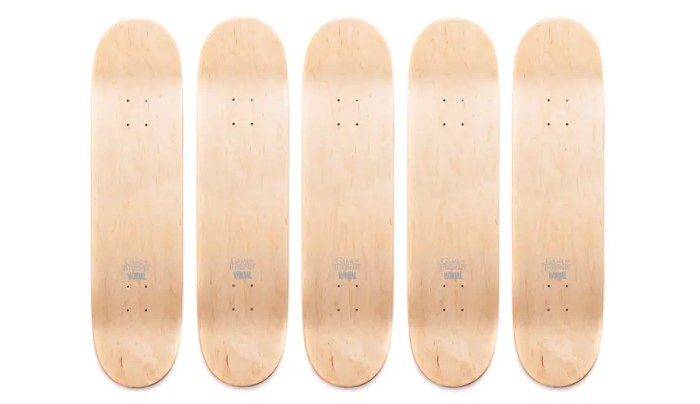 The decks are intended to serve a dual-purpose: “a heritage art piece that will last 20 years from now for diehard Game of Thrones fans” and a functional piece for “skate fans who can ride.” Whether they’re used for kick flips or hung on the wall, the decks are designed as mementos of the epic experience that is Game of Thrones. After getting hooked on “the realistic life, power and politics” of Game of Thrones, Alife partner and general manager Treis Hill jumped at the opportunity to integrate his contemporary streetwear brand with the bold symbols of the Thrones universe. It was important for Hill to lean into Game of Thrones fandom in a way that felt both authentic to the brand and crossed over into a fashionable “right now” vibe and feel. 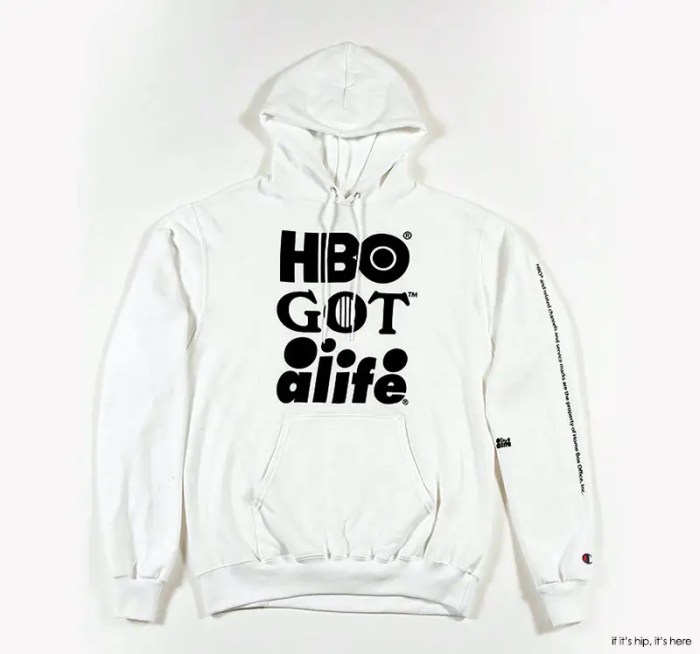 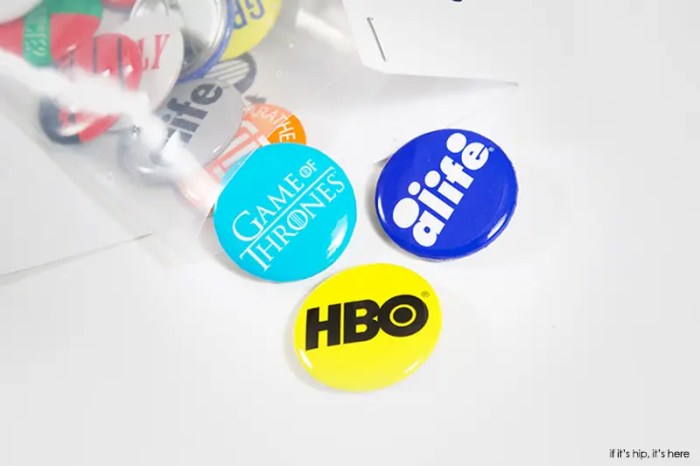 For Alife’s GoT-inspired piece, Hill and his team matched the graphic logos of GoT, HBO and Alife on a white sweatshirt and designed brightly-colored pins which can be added and removed. Emblazoned with fan-favorite sigils and logos, the pins allow wearers to “customize [the sweatshirt] in their own special way.” Hill described the resulting sweatshirt as a combination of the company’s bold contemporary colors with iconic GoT elements. Hill summed it up: “strong logos from all three brands and the buttons represent the stories of all the families in the game.”

Each subsequent ‘Rep the Realm’ micro-collection will be revealed throughout the season via press and social media with limited quantities made available for giveaways. Every release will be accompanied by a behind-the-scenes look at the creative process from each respective designer.

images and information courtesy of https://www.makinggameofthrones.com/

Jesus, Is It That Late Already? Time Savior Watch by Kirstin Ulve for Mr. Jones.