` Vogue Italia illustrated Covers by 7 Artists - If It's Hip, It's Here
Skip to content 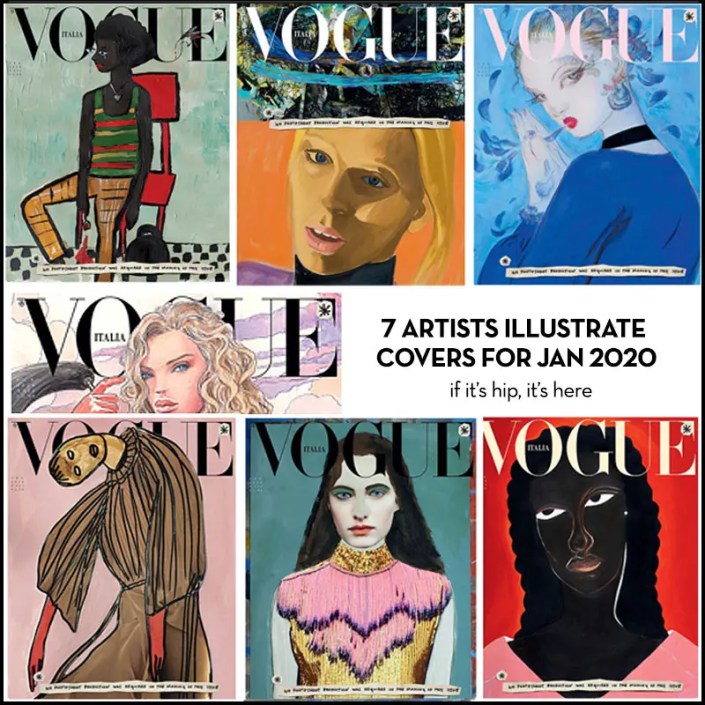 Vogue Italia, for the first time in its history, renounced the use of photos for the magazine’s January 2020 issue to make room for 7 drawings and illustrations to be used as the cover instead, putting creativity -and the incurred costs of photoshoot production – at the service of sustainability.

The challenge was to demonstrate that it’s possible to communicate the fashions without photographing them. This is a first for Vogue Italia, who had never had an illustrated cover before. The editor explains more about the project here.

All the covers for the January issue were created by artists, ranging from well-known art icons and emerging talents to comic book legends – without the cost of travel, shipping entire wardrobes of clothes or polluting in any way.

Thanks to the generosity of these artists, the amount of money saved in January’s Vogue Italia production will be donated to the restoration of the Querini Stampalia Onlus Foundation in Venice, heavily damaged by the horrible storms last November, according to Emanuele Farneti, editor of Vogue Italy.

Below are the seven illustrated covers for the January Issue.

“I owe everything to women,” says Milo Manara, the father of erotic comics. The artist who collaborated with Hugo Pratt, Federico Fellini, and Alejandro Jodorowsky, this year, is celebrating fifty years of career. “For my cover I referenced the greatest of models, Michelangelo’s David, but in female form. I wanted to recreate the same pose, the quiet pride of the victor, which is the attitude that represents femininity in our times despite male resistance. David took on Goliath’s brute force with a slingshot. He won by using intelligence. Today, women have a great Goliath to defeat: male chauvinism, the patriarchy, and violence.” #MiloManara