` Underbelly by Kathy Hepinstall and Rohitash Rao - If It's Hip, It's Here
Skip to content What do you get when you put two talented long-time friends with a slightly perverse sense of humor together? You get Underbelly – a collection of witty, insightful and aesthetically compelling single panel comics that reveal the darker side of culture and society. Now turned into paintings, they will be exhibited at Fathom Gallery in Los Angeles.

Both published authors, novelist Kathy Hepinstall and artist/director/animator/writer Rohitash Rao met when they started out working in the advertising business in the early 90s. It was at that time that Underbelly was born. The comics were quickly picked up and published in now defunct artsy magazines such as Ray Gun, Caffeine and Bikini. But alas, time passed and the talented two went on to pursue other things.

As Kathy Hepinstall explains it:
“…Then the dream relocated to the back of a drawer.

Ro went on to become an artist, director, animator and writer and Kathy went on to publish novels. Recently they reunited to revisit the dream child they never forgot.

These darkly optimistic, single paneled comics explore the underbelly of our lives, that spectrum from which we can admit that daily existence can be both surreal and non-sensical. Though the subjects seem randomly organized (God, Racism, gnats, and imaginary friends) all of them seek to enter and understand this planet we call home through the tiniest and most ordinary moments.

Decades later, the themes are still current. Culture and society changes rapidly but that twisted, almost heroic way humans doggedly try to understand their world remains the same. Thus the Underbellies written in the beginning and recently belong together.” So, Underbelly is back and better than ever. Ro has taken 37 of their favorites and using spray paint and acrylics, turned them into 22″ x 30″ color paintings. The process was quite complex as you can see from the images below. The new pieces will be showing at Los Angeles’ Fathom Gallery beginning January 21st. Here’s a few more to whet your appetite. 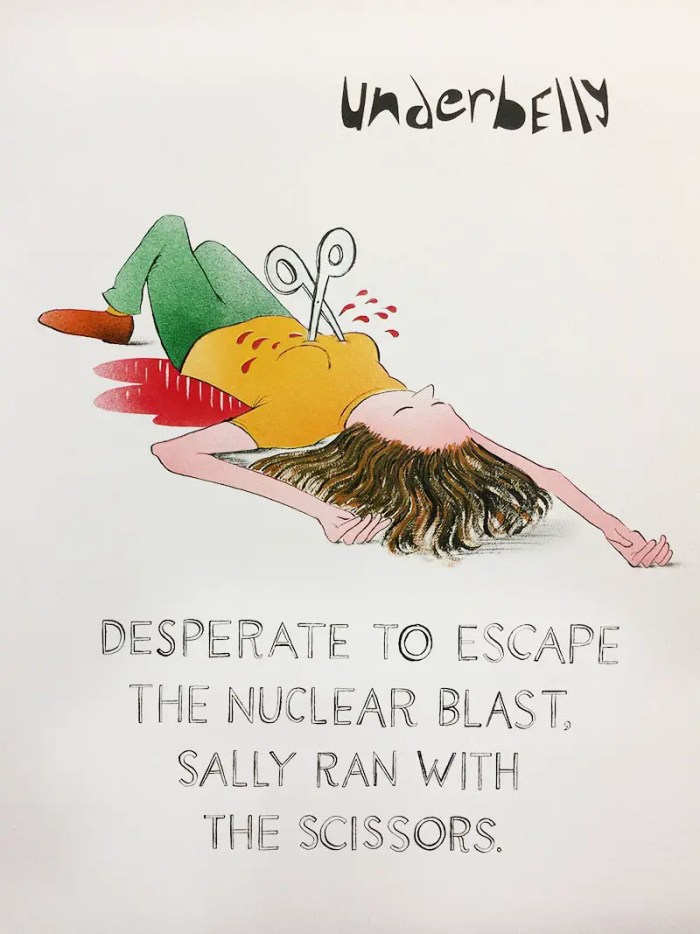 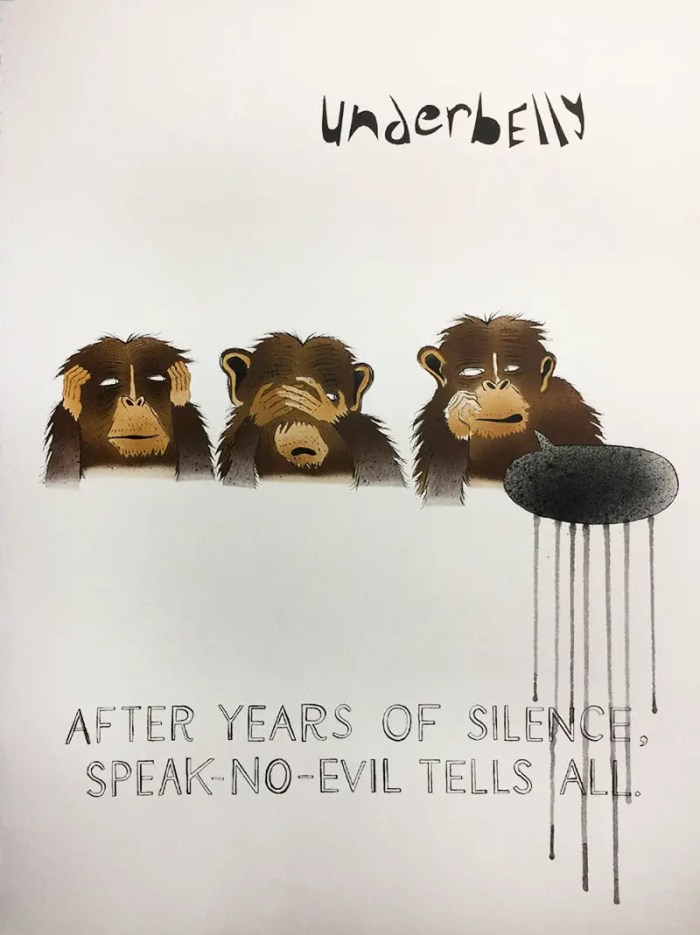 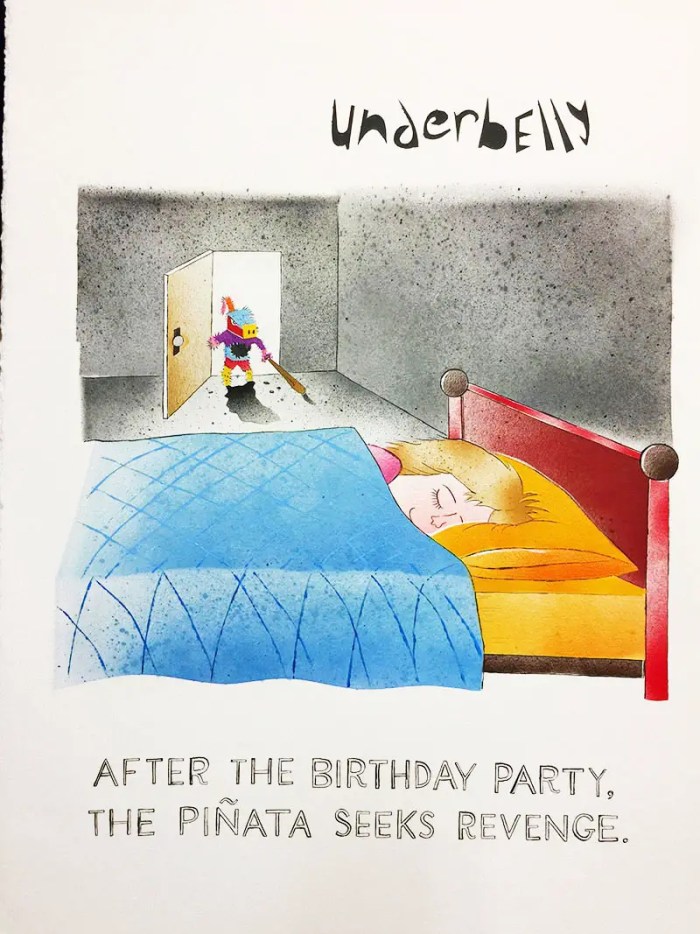 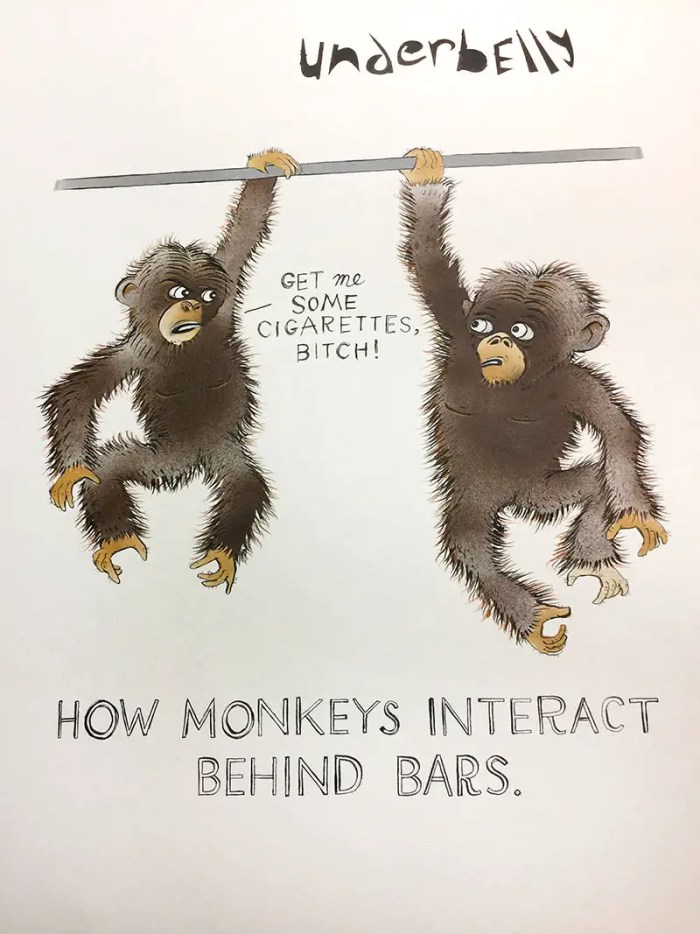 If you’re in the Los Angeles area, don’t miss it. It’s going to be a great show.

All About The Indy 500’s Creepy Evolving Borg-Warner Trophy

Beautiful Creative Encourages You To Beautify Our Beaches For California’s Coastal Cleanup Day.