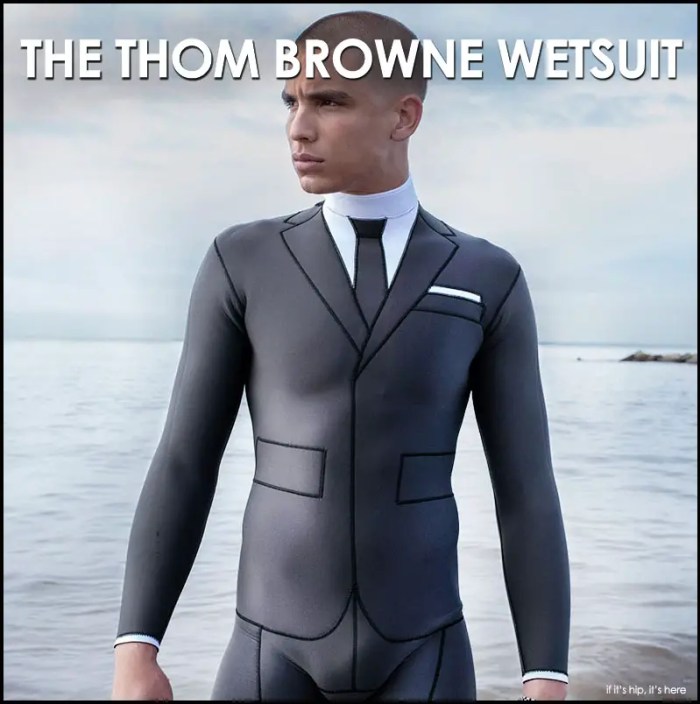 In addition to his cool surfboards and other beachwear, award-winning fashion designer Thom Browne has introduced a fully functioning wetsuit for just under $4,000. Yes, you read that correctly. 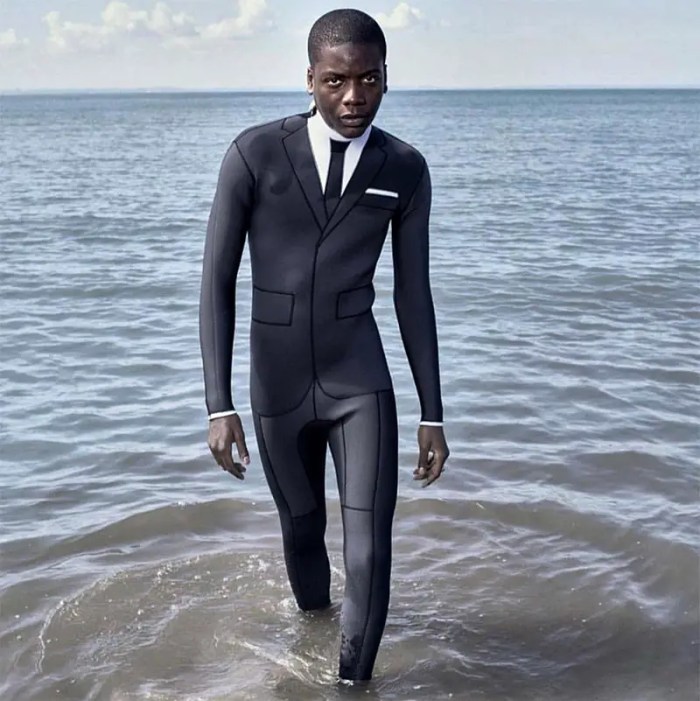 The scuba suit is printed with a jacket, trousers, lapels, top collar and tie with a centered back zipper with the designer’s signature Red, White and Blue Grosgrain Tab. These fabulous photos were taken by Wayne Lawrence, styled by Ronald Burton III (aka Ron Breezy) for an editorial in Document Journal with casting by Midland Agency and production by Replica. 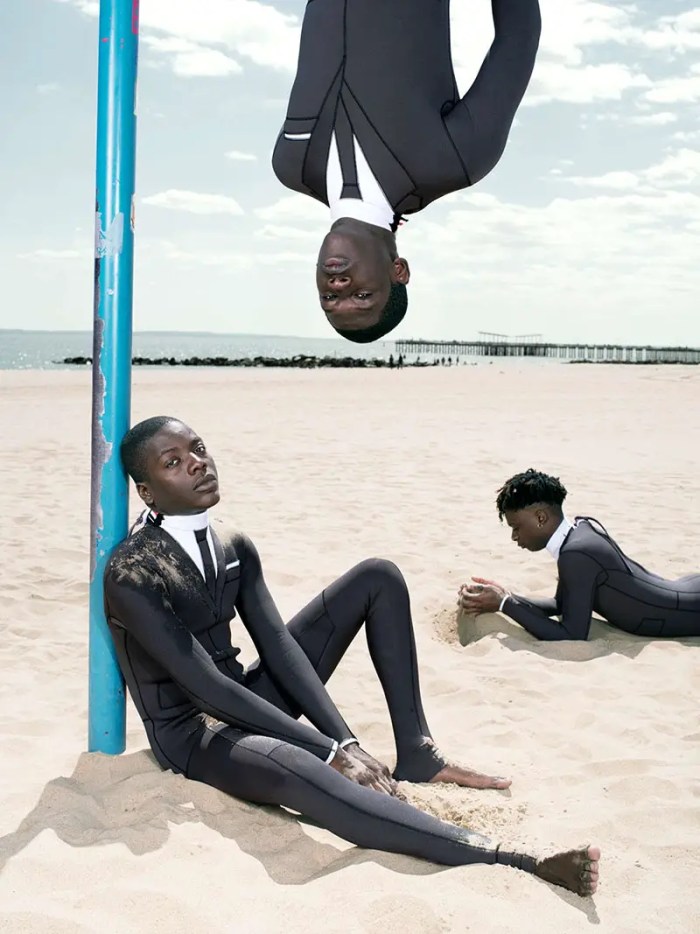 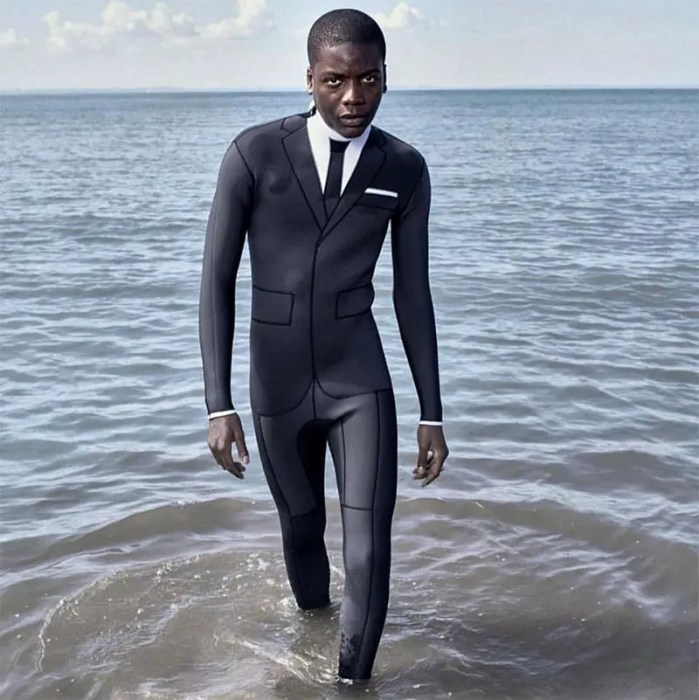 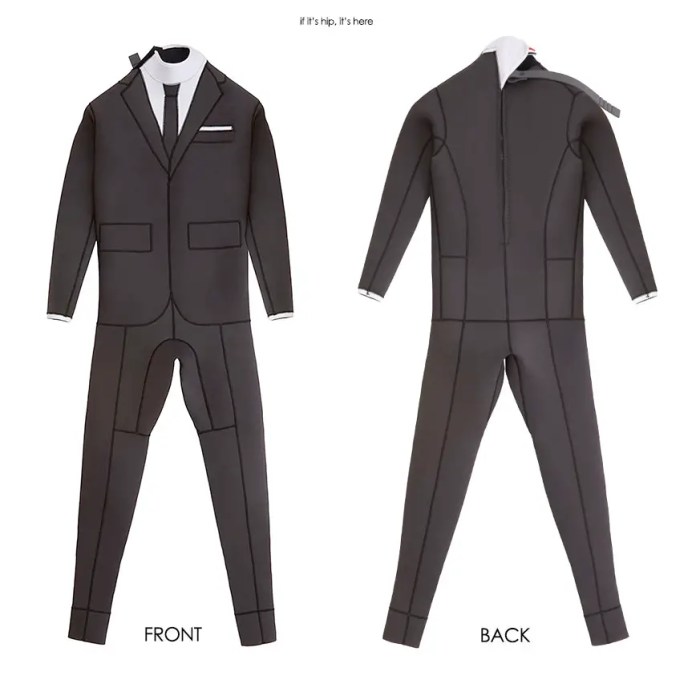 About Thom Browne:
Thom Browne began his career designing men’s bespoke clothing and expanded his line into a full ready-to-wear collection in 2004. Browne’s style, rooted in a truly American sensibility and inspired by icons of the late 1950s and early 1960s, updates classic silhouettes with unexpected proportions. He was named the 2006 Menswear Designer of the Year by the Council of Fashion Designers of America; his work was included in Cooper-Hewitt’s 2006 National Design Triennial; and, that same year, he was a finalist in this category. In fall 2007, Browne launched a men’s and women’s collection for Brooks Brothers and a collection of men’s jewelry for Harry Winston.” -Cooper Hewitt National Design Awards 2008.

His traditionally based hand-made suits have evolved into collections recognized by museums around the world including the Costume Institute at the Metropolitan Museum, the Victoria and Albert Museum and the Fashion Museum in Bath. Browne’s innovations in tailoring have been identified with impacting the paradigm of men’s and women’s fashion.

The Thom Browne collections for both men and women are available through Thom Browne stores in New York, Tokyo, Seoul and Hong Kong as well as at luxury designer specialty stores around the world, such as Bergdorf Goodman, Barneys New York, Colette and le Bon Marché in Paris, Dover Street Market in London, Tokyo and New York, Mr. Porter, Selfridges in London and Isetan, Hankyu and United Arrows in Tokyo.

Athletes Recreate Iconic Album Covers For ESPN. All The Images, Side by Side Comparisons and Behind The Scenes Shots.