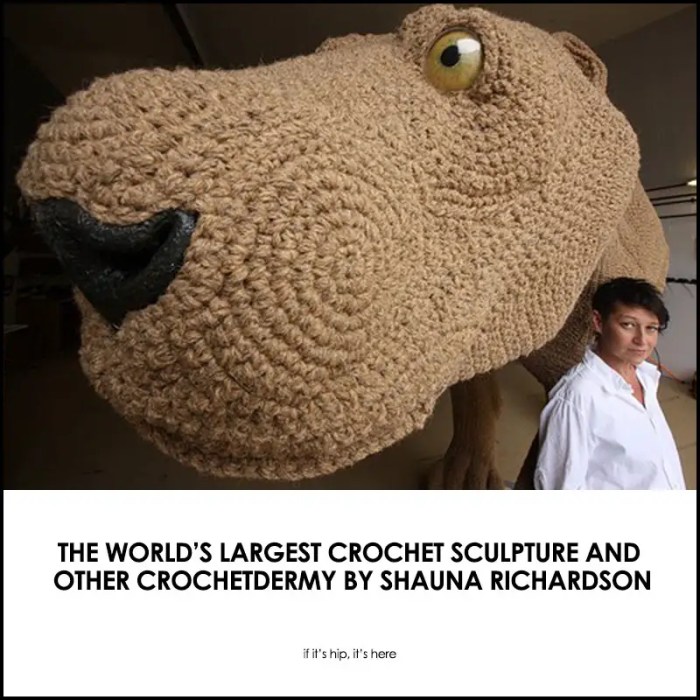 above: Shauna Richardson stands by her Lionheart project, the world’s largest crochet sculpture

Crochetdermy by Shauna Richardson turns game hunters into knit wits. Her mounted animal heads and animal statues made of hand crocheted knits take the old tradition of taxidermy and give it a politically correct and artful spin. She creates life-sized and oversized sculptures that blend craft, realism and collecting.

I will first share with you her Crochetdermy mounted heads and animal sculptures, followed by her Lionheart project, featuring the world’s largest crochet sculpture. In 2009 Shauna won ‘Artists taking the lead’ part of the London 2012 Cultural Olympiad with the ‘Lionheart Project’. For two years she has been creating the largest single-handed crochet sculpture in the world, three giant lions. The finished piece will be housed in this mobile glass taxidermy style truck case and tour throughout 2012:

The building of the glass case:

Tour Dates
Shauna Richardson’s ‘Lionheart Project’ has announced its UK tour, which will see three giant crocheted lions travelling the country in a 16 metre long illuminated glass case (shown above). Starting on 1 May 2012 at Chatsworth in Derbyshire, the three giant lions will tour the East Midlands before arriving at the Natural History Museum in London in time for the London 2012 Olympic and Paralympic Games. Harking back to a travelling menagerie show, the lions will also visit venues in Leicestershire, Lincolnshire, Northampton and Nottingham, calling in at events such as SO Festival and Twycross Zoo. The lions will reach out to an estimated audience of over half a million visitors across all venues, with countless more sightings when they take to the road.

Learn more about the Lionheart Project. Shauna Richardson’s background is in conceptual art. The unique body of work she terms ‘Crochetdermy’ evolved out of the exploration of the theory that ‘Anything can be art’. She uses crochet to sculpt realistic life-size animals – uncanny taxidermy-like forms. Crochetdermy combines themes such as objects, collecting, craft and realism and experiments with accessibility and audience. Richardson has received much critical acclaim. Her work is receiving worldwide media coverage and selling into collections across the globe.

Despite the enormity of the Olympic Lionheart project in the last six months Shauna has managed to fit in a very unofficial portrait of Prince Harry commissioned by the Guardian Weekend Magazine, and winning ‘Best Sculpture’ and the ‘Overall Gold Award’ at Art of Giving held at the Saatchi Gallery. Crochetdermy pieces are created to commission. Selected works on her site are available for purchase.