Every year on April 20th, the story of “the Waldos”, five former San Rafael High School students who are responsible for the origin of the pot smoker’s term 420, spreads across all media. It’s been 47 years since the group of guys from my own high school first coined the term. This year they collaborated with Chemistry, a Berkeley-based vape pen cartridge company in Oakland, to launch their own called “1971: A Vintage Cannabis Experience.” “The Waldos” have co-created their own vape pen, to be released today – the first high holiday under legal recreational sales in California. All net proceeds of the co-branded pen “1971: A Vintage Cannabis Experience” will go to the leading cannabis law reform group Drug Policy Alliance, according to Dave Reddix, one of the five former San Rafael High School students. “We had several nonprofits in mind, and we’re not political, but they’re doing good work for people who are persecuted under drug laws in states where cannabis use is not legal,” Reddix said of the Waldos’ choice of the alliance. Millions of dollars have been made over the years exploiting the number, from T-shirts and hats to cannabis businesses with 420 in their names. Hotels and tour companies advertise themselves as “420 friendly” and dating sites contain listings for people “420 compatible.”

Though dozens of 420-related trademarks have been issued to various companies, The Waldos hold only one. “We identified a most stellar batch of full-spectrum cannabis oil called ‘Strawberry Fields’ for this collaboration and are so stoked to team up with the Waldos to release it as 1971: A Vintage Cannabis Experience on 4/20,” says Chemistry cofounder Trevar Mazza.

“The Waldos are so excited to support Chemistry’s 1971 vape cartridge,” says Waldo Steve Capper. “The quality is really outstanding — our favorite vape on the market.” 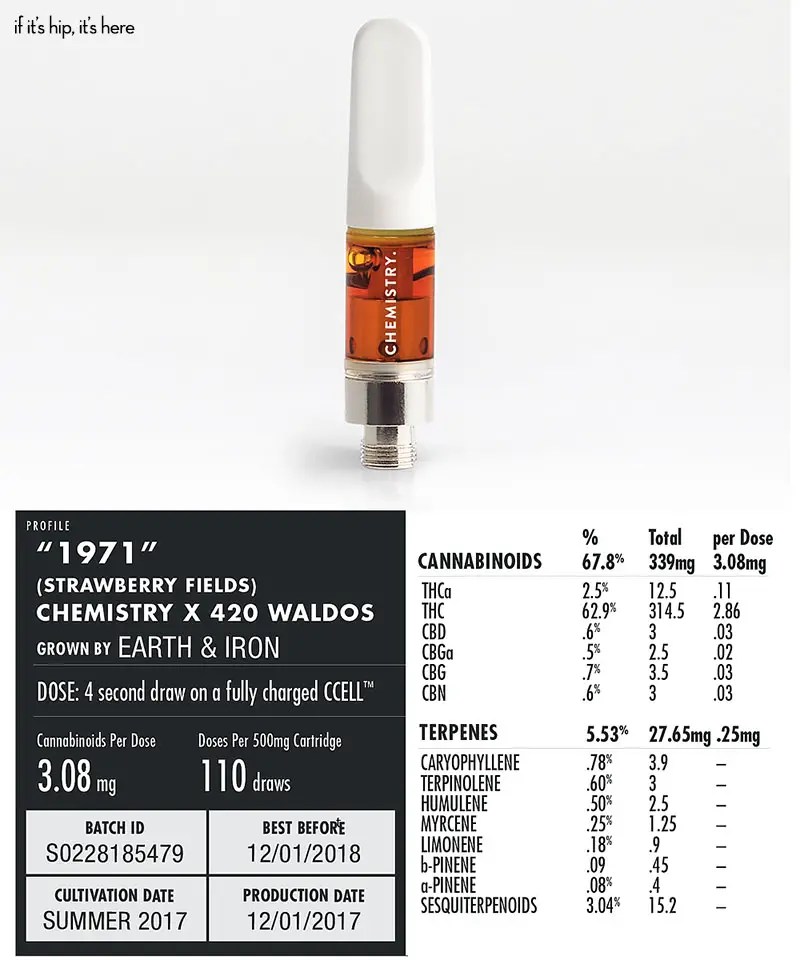 Chemistry manufactures small batch, full-spectrum vape cartridges that not only taste like the strains they process, but feel like them too. “Chemistry’s mission is to Stay True to the Plant we process,” says Mazza. “Our aim is to recreate the green hit off a bowl, from flavor to effect.”

The company’s proprietary extraction and refinement techniques were developed by Paul Roethle, who holds a Ph.D. from UC Berkeley in Organic Chemistry. Roethle spent years inside the biopharmaceutical industry working on pharmaceutical medications before leaving for greener pastures.

“We can’t wait for Californians to experience our collaboration with the Waldos,” says Roethle. “The cart has this classic stoney lift that people are going to really dig.”

“Hitting the 1971 pen for the first time was like enjoying a stash of primo from the 70s,” says Waldo Dave. “Far out, truly. We only wish they gave us more samples!”

Now in their 60s and living in Marin and Sonoma counties (and still occasionally using cannabis), The Waldos said they will not financially profit from this collaboration, nor do they profit from the permission they gave to Lagunitas Brewing Co. to use the Waldo name in its “Waldos Special Ale,” which is brewed and sold each spring.

To support the launch, The Waldos will make a personal appearance on 4/20 at Oakland’s Magnolia dispensary, 161 Adeline St., near Jack London Square, from 3 p.m. to 8 p.m. today. Adults 21 and over with a valid I.D. are invited to join them in the dispensary’s consumption lounge.

Thanks to Greenstate and Chemistry for the images and information