you are here: if it's hip, it's here » art » hyper realism » The Urban Appeal Of Steven Albert’s Photo-Realism Paintings

Steven Albert’s oil paintings are hyperrealistic representations of urban and small town icons like cafes, coffeehouses, street windows, graffiti scrawled walls and parked cars. The mundane subject matter is executed with a deft hand, keen eye and romantic familiarity, especially to those who grew up around San Francisco. 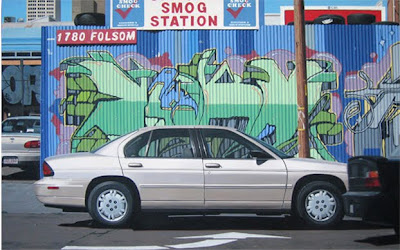 Reminiscent of the hyper realistic paintings by Robert Bechtle and Richard Estes, Alberts’ work catapults us into present day venues with the graffiti and street art not apparent decades ago when Bechtle was immortalizing suburbia or in the hyper realism paintings of Stephen Magsig‘s Michigan. 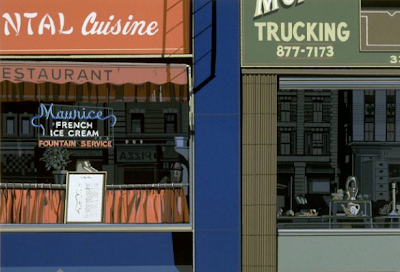 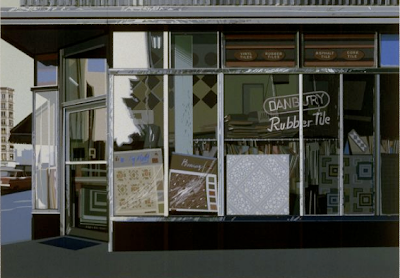 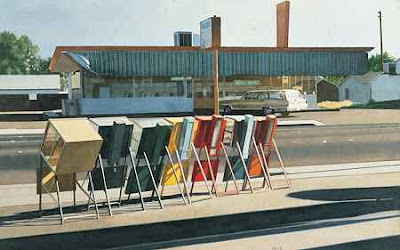 In Steven Albert’s work, the audience’s relationship to the paintings and their subject matter depends up the viewers position in relation to the scene. At times you are a voyeur peering into the crowded cafes and the patrons within, separated by doors or windows, such as in the following pieces: 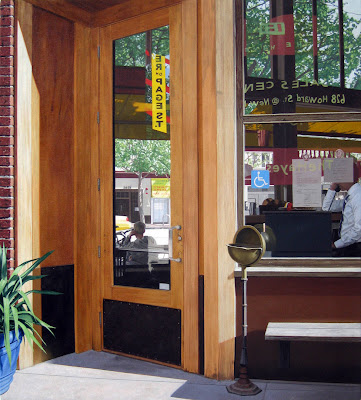 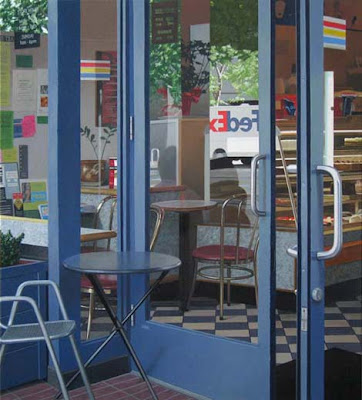 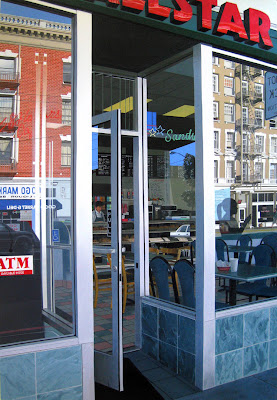 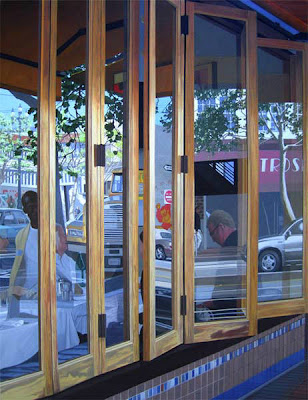 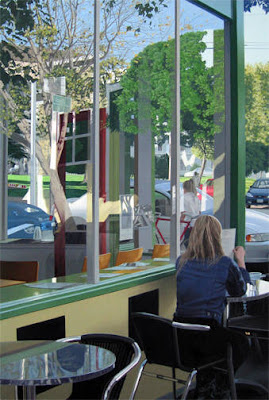 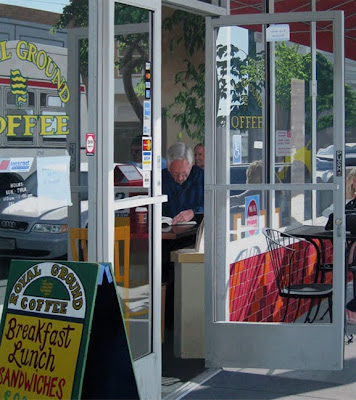 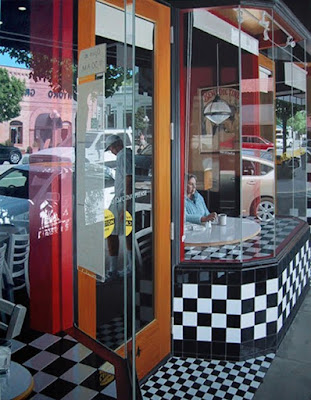 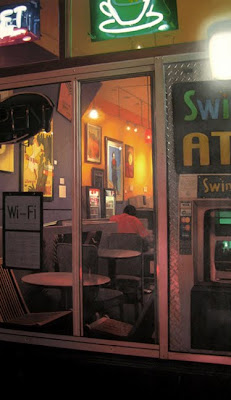 Evening At The Allstar: 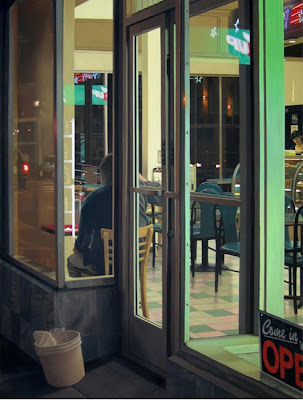 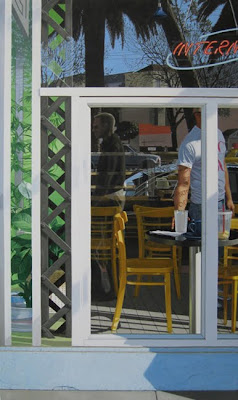 At other times, you are within the establishment, often empty and laden with a quiet calm inside as you witness the action outside, separately only by plate glass windows: 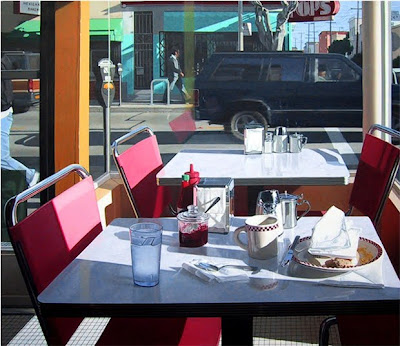 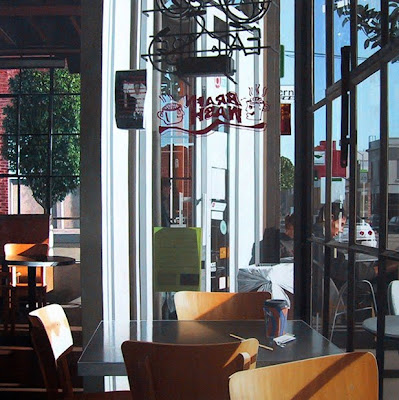 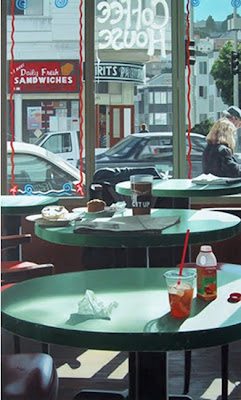 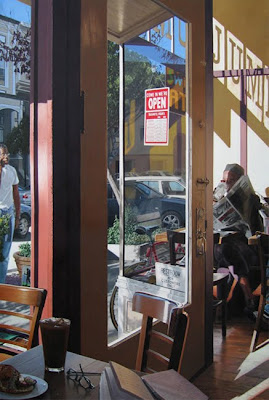 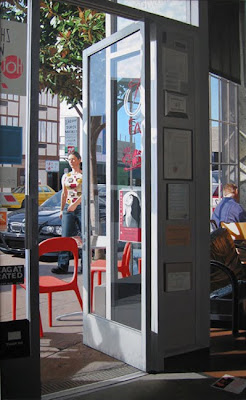 And still, in other pieces you are a distant witness to surroundings you might often have overlooked or grown anesthetized to unless you saw them immortalized on canvas, as in the following works: 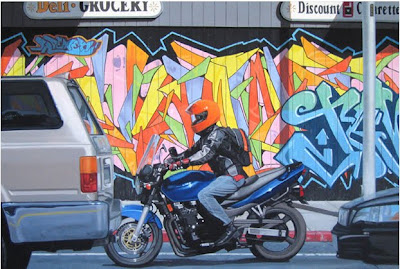 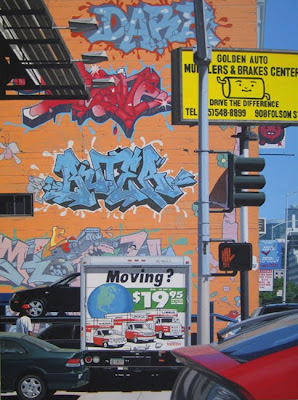 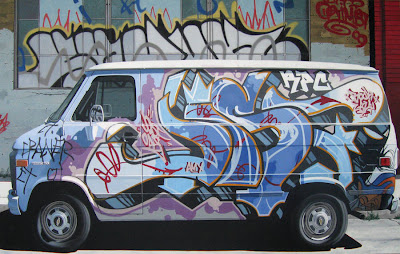 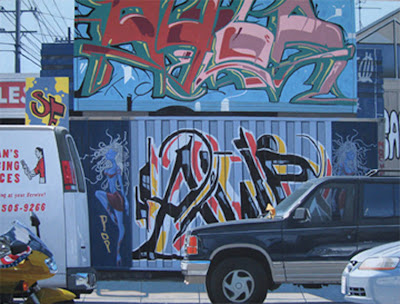 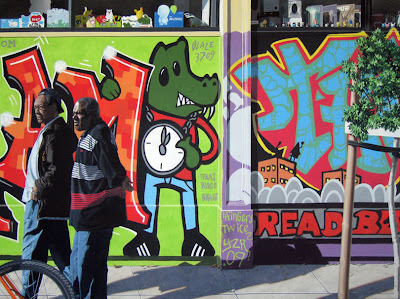 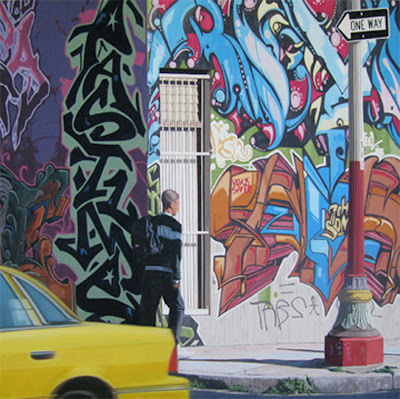 Artist bio:
From the forests of Northern Maine, where he was raised,to the streets of San Francisco, Steven Albert’s paintings have always been informed by patterns of clear, bright sunlight and shadows.

Although architectural designs dominate his imagery, doors and windows are often the focus, creating a sense of portal into often missed aspects of our concrete reality, whether it be rooms of mysterious and zen-like calm, or the fractured and frenetic multiplicity of urban cafes and storefronts. Albert seeks to highlight the small moments, common in our lives, but often unexperienced.

Albert’s work is represented by galleries in Los Angeles, San Francisco, and New York and has been exhibted in various museums and venues around the country. His paintings are included in several important collections worldwide. In 2006, he was awarded a Pollack-Krasner Foundation grant.

Artist’s Statement:
In my paintings, I begin by discovering and drawing out abstract, linear and spatial order from the seemingly random activity of commonplace situations, such as those found sitting in or walking by cafes and restaurants where so many elements of normal life converge. Architectural elements are used as a sort of scaffolding to frame, and fracture the picture plane and illusionistic spaces, creating something of a kaleidoscopic collage.

Objects and events like interior/exterior, people, streets, cars, tables, chairs, cups, napkins and trees, are held together by a unifying, realistic rendering and warm, bright light, shadows, and reflections luring us in.

With no object or figure deemed more central or more important than any other, the paintings are subject-less and decentralized, seemingly expanding beyond the confines of the canvas. The final images compel, disquiet and reassure. Comfortable inviting moments are answered with jarring complexity, and sometimes confusion.

They are still, silent, possibly ambiguous, yet frenetic, complicated and active. They are without emotional or narrative context, moral or politic. They are also without existential probing and anxiety. Viewers may decide to impart such meaning depending on their own personal experiences and reactions. Instead, the paintings are distillations and attempts at acceptance of the ever changing and ungraspable and inescapable and unedited “now”, brimming with imminent and potential energy. They delight is simply being “slices of life,” stumbled upon and easily missed, inviting contemplation of the moments and structure within our surroundings.