The Pendleton Limited Edition Airstream is a collaborative effort between two of America’s most established brands. The Pendleton lifestyle brand, best known for their Plaid, Striped and American Indian-inspired wool products teamed up with Airstream to design the new trailer in honor of the National Parks Foundation Centennial. Each is individually numbered with a commemorative badge and comes with a one-year America the Beautiful – The National Parks and Federal Recreation Land Pass.

Every detail has been considered to make the Pendleton feel like a home away from home: it even features a lighted handle and doorbell. Authentic Pendleton® woolen fabrics, handcrafted rustic wood cabinetry, and embroidered Ultraleather™ are included in the interior. 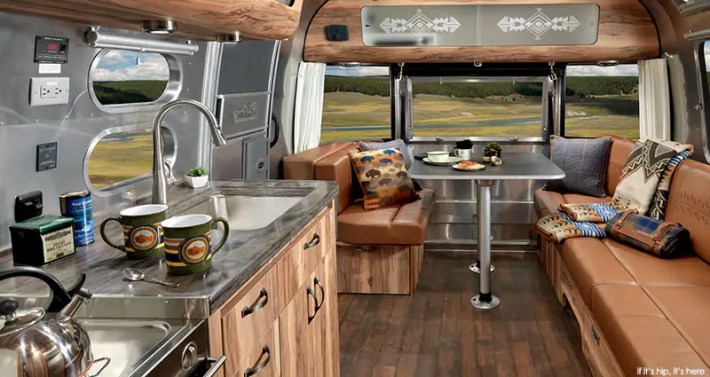 In the wide galley, you’ll find a 8″ deep sink with a removable Corian® cover, a stainless steel oven, and cooktop with glass cover. The interior walls even feature a wall map of Yellowstone, the world’s original national park. Brown Peat Ultraleather™ is custom-embroidered with Pendleton’s American Treasures design, which evokes the forests, rivers, and mountains protected by the National Park Service, while geometric patterns honor the Native Americans who have cared for our lands for centuries. 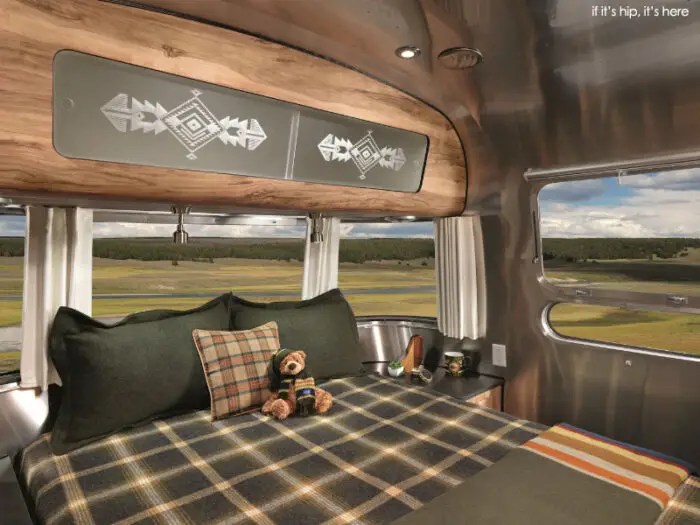 A special awning package comes standard and the screened rear sport hatch opens wide to welcome in the outdoors, while dual Quietstream™ air conditioners keep the inside cool in the summer’s heat. The Airstream comes with an exclusive Pendleton Accessory kit (from their own National Park Collection) which includes woolen blankets and shams, wool-down blend bed pillows, toss pillows, bath and hand towels, a dining set, a pet bed, a cuddly teddy bear, and even a scented candle. 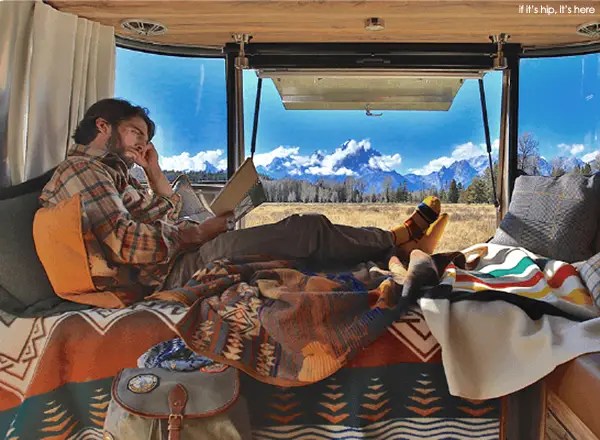 Inspired by a mutual love for the great outdoors and made in the USA craftsmanship, these two authentically American brands have joined together to pay tribute to our nation’s parks – and to the great adventures we all share.

“Airstream founder Wally Byam was an innovator and a lover of the outdoors, who believed in an enduring promise of adventure, new experiences and faraway lands,” said Airstream CEO Bob Wheeler. “That same spirit is a cornerstone of the Pendleton brand, and together we are celebrating our national parks.”

Also at Outdoor Retailer, Pendleton announces a new National Park Collection products inspired by the national parks in apparel, accessories and for the home – several of which are featured in the new Airstream limited edition trailer. 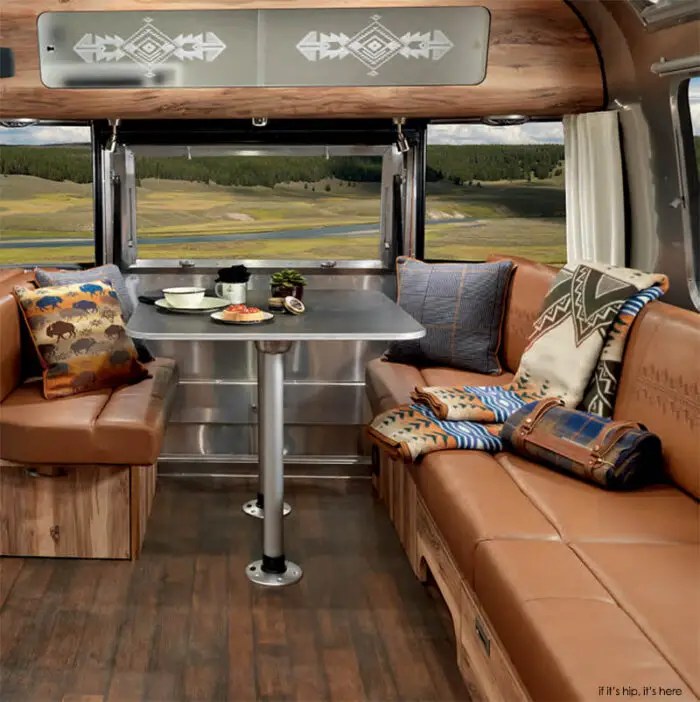 “In 1916, Pendleton debuted the first National Park Blanket in Glacier Stripe, that same year the National Park Service was born. The parks have remained an important part of our heritage ever since,” said Pendleton vice president of global sales, Bob Christnacht. “We now have ten featured parks highlighted in our blanket collection that honor these great American treasures.”

Each of the 100 Airstream trailers includes features that enhance the outdoor adventure experience, such as a rear sport hatch for immersive views and easy loading/unloading of oversized equipment such as bikes or kayaks; roomy living spaces and lodge-like aesthetics; and park-inspired Pendleton decor and accessories. The 28-foot trailer can sleep six people, and its queen size bed comes with Pendleton bedding to provide total comfort at the end of an adventurous day.

“As we kick off the next century of the National Park Service’s critical work, we couldn’t be more pleased to have two of America’s most iconic outdoor brands join together to not only help us celebrate, but also help us preserve this country’s magnificent landscapes, rich history, and cultural treasures for generations to come,” said Susan Newton, vice president of grants and programs for the National Park Foundation.

The partnership between Airstream and Pendleton will be supported with marketing campaigns by both brands. The Pendleton Airstream has an MSRP of $114,600, and is now available at dealers nationwide.

The Coolest Cooler Breaks Kickstarter Record by Raising over $10.7 million.